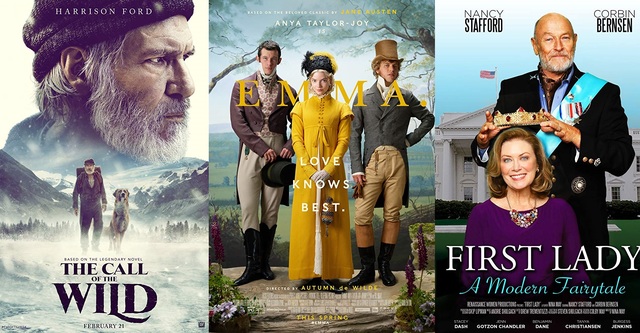 Latter-day Saint Movie Review: What Families Need to Know Before Seeing "The Call of the Wild," "Emma," and "First Lady"

The Call of the Wild

Buck is a family dog who is always in trouble, and after he is kidnapped, trouble finds him in the Alaska wilderness. Buck is a remarkable dog, and the movie is based on the beloved novel The Call of the Wild by Jack London. What makes this movie remake of the charming story especially new and different is that the dog is 100 percent CGI! Director Chris Sanders made a digital scan of the animal shelter dog his wife adopted. It’s a cross between a St. Bernard and a Scotch Shepherd, the exact same mixed breed as the dog in Jack London’s book. This the live-action directorial debut of Chris Sanders, who previously directed the animated movies How to Train Your Dragon and Lilo and Stich.

The CGI of Buck is extremely impressive . . . most of the time. All the other animals in the film are also CGI, including Timberwolves, a bear, deer, and rabbits. We’re so spoiled with technology, right? The cinematography and green screen work are blended extremely well. You’ll almost feel the warm sun on your face in some scenes and shiver in the snow in other ones as you visit Alaska and the Yukon territory. There are some moments, however, when the CGI animals look super fake.

The cast is relatively small but does a good job. Omar Sy is likable and believable as a French sled-dog leader for a mail delivery service. And who doesn’t love Harrison Ford?

Using illustrations at the very beginning to establish the setting was a nice touch, both to take us back in time and to give a respectful nod to the original novel. You see some beautiful nature and scenery. You travel with Buck on his journey and see and feel what he does, including the gorgeous Northern Lights and fireflies. Some of the scenes are absolutely breathtaking. It’s also fun to watch Buck experience snow for the first time, as well as other things along his adventure.

On the other hand, while Buck’s heart expands during the movie, so does the size of his body. Unfortunately, his CGI size isn’t consistent from scene to scene. He is also given a lot of human emotions and behavior that aren’t quite correct for canines. For example, somehow Buck understands the dangers of drinking alcohol, so he hides a bottle of alcohol from someone. There are some details that aren’t accurate or don’t make sense, but try not to let them bother you and you’ll enjoy the film.

Bradley Whitford does a great job with his few scenes, and some very talented actors have small roles, such as Dan Stevens, who plays an over-the-top villain. The villain’s wife is played by the talented Karen Gillan, who showed great athleticism in the movies Guardians of the Galaxy (Theatrical) but who sits motionless on a sled in most of her scenes in The Call of the Wild. Sadly, the movie doesn’t showcase all of the actors’ talents, which is disappointing.

Fans of period pieces by Jane Austen and of Downton Abbey will enjoy this extremely stylish remake that takes place in 1800s England. Directed by Autumn de Wilde, this sumptuous adaptation is absolutely beautiful to look at. We’re told on the screen after the opening credits, “Emma Woodhouse, handsome, clever, and rich, had lived nearly 21 years in the world with very little to distress or vex her.” And so begins the crum-a-grackle and cureckitycoo.

Anya Taylor-Joy is a lovely Emma. Did you know she grew up in Argentina? The first time most people saw her was in M. Night Shyamalan’s fantastic thriller Split. She’s equally beautiful as a blonde or a brunette. During the majority of the movie, you won’t like Emma at all because she is so manipulative, selfish, snobby, critical of everyone, and controlling. That’s the point, really. Jane Austen actually wrote about her book, “I am going to take a heroine whom no one but myself will much like.” Mission accomplished. There is, however, a scene where you see Emma grow up and change in an instant. That’s when you’ll start to root for her.

Other cast members are noteworthy, such as Bill Nighy, who is very entertaining, and Josh O’Connor who is perfect as Mr. Elton. He’s especially hilarious in the scenes when he is preaching in the church. And that smile of his is ridiculously contagious. Several years ago, I stumbled across Miranda Hart’s British TV show Miranda Complete Collection]

I got such a kick out of it, so I love seeing her in movies. She’s the perfect Miss Bates. Despite Johnny Flynn’s shaggy hair, which makes him look more suited for the role of farmer than gentleman, he does a good job and actually wrote the song that plays during the end credits. All of the actors who sing and play instruments in the movie really do so.

The costumes by award-winning designer Alexandra Byrne are absolutely stunning with gorgeous details. It’s early in the movie year, but there should be another Oscar nomination headed her way for her outstanding work in this film. The scenes that showed some girls walking by in their red coats were perfect. What a vignette of color.

The music supported the old English atmosphere of the film with some fun variety. You’ll even recognize some of the words and melodies in our Latter-day Saint hymn book! You also get to see some beautiful English homes and British landscape. Both the interior and exterior settings could not have been better.

All of that sounds like a glowing review, right? Well, even with all of those features, the movie isn’t perfect. Act 1 is super sluggish and almost lost me. If you can get through its messy and confusing writing, you’ll be rewarded with a much more entertaining and insightful Act 2 and Act 3. There will be a lot of people (dare I say men?) who would rather do a million other things than sit through this movie. It features a lot of silly nonsense, something that Mr. George Knightly abhorred in the film when he stated, “Men of sense do not want silly wives.” Speaking of Mr. Knightly, there just isn’t any believable chemistry between him and Emma the way the two actors portray their characters. It’s supposed to be humorous when they argue, but it’s mostly annoying because they yell over each other at the same time rather than engaging a playful back and forth banter that would have been much more enjoyable and easier to understand. Some of the dialogue hangs so heavy that the humor is lost.

Some Americans will have a difficult time understanding everything that is said with such strong British accents. (Fun fact: Because there were actors in the cast from several different regions of the United Kingdom, they actually had a voice coach on set.)

WHAT’S IT ABOUT?
The President of the United States dies suddenly in office, leaving the First Lady scrambling to support the Vice President, who is single, while defending the White House from inept candidates trying to replace them both.

This romantic comedy is timed perfectly for a presidential election year but plays it extremely safe on the political front. That could be a good quality, making the movie clean, harmless, family-friendly, and not controversial. Unfortunately, the quality of the filmmaking is truly terrible.

From the first moment the movie opens, it feels like something that should have premiered on the Hallmark channel or some other chick flick cable channel instead of the big screen. It looks and feels like the low-budget movie it is. Sadly, it’s impressively awful in so many ways. I feel terrible saying that, but I want you to know what to expect.

First of all, the acting is really bad. You will probably only recognize two of the actors in the entire cast. One is Corbin Bernsen, who received multiple Emmy and Golden Globe nominations for his role in LA Law: Season 1 (Official US Version). The other is Stacey Dash, most famous for her role in Clueless Corbin Bernsen’s British-like accent is atrocious in this movie and fades in and out in every scene. He plays the king of a faraway country, so I suppose the accent is supposed to make him sound exotic and charming, yet the actor who plays the king as a younger man has an American accent. How does that make sense? There is no attention to detail in this movie. Sadly, there is, again, no chemistry among the romantic leads (Corbin Bernsten and Nancy Stafford). That’s a pretty big problem for a romantic comedy. Beyond the main romance, another romance is implied between Stacey Dash’s character and a White House guest in a wheelchair, but absolutely nothing happens, and that storyline completely drops with no resolution.

None of the characters are very likable. Most of them are over-the-top ridiculous, but not in a funny way. Sandra Belforte’s character, Cameron, changes her political stance and personality overnight with no explanation. The dialogue is super stiff, making all of the actors look like they’re just saying lines rather than disappearing into real people on the screen. I kept waiting to laugh. I wanted to laugh, but the humor just wasn’t there.

The plot is extremely predictable, which isn’t surprising since the movie poster gives the story away. The sets look like it was filmed in someone’s house, and I’m not talking about the White House. The editing is noticeably bad, especially at the 1-hour 31-minute mark. The costumes were super cheap looking, and the jaunty music tells you not to take the movie seriously. It just seems like this entire film was done in a rush in order to take advantage of the timely election season. There is so much talk about coffee. What’s up with that? In one scene, a character carries around one of those little teacup dogs that is so cute you can’t believe it’s real. Then, for the rest of the movie, it isn't real because a stuffed animal is used. Could the production studio not afford to rent that dog again for another day or two?

One of the best redeeming qualities of the movie is that the First Lady knows history and tries to preserve it and teach it. There are some paid Millennial protesters who park themselves outside the White House every day, but they admit they don’t know what their cause or complaints are. The First Lady takes it upon herself to teach them how to use their voice to make a positive difference. We all need to learn that. Some interesting lines that serve as worthwhile messages are:

Fun MovieMovie,Fun
Comments and feedback can be sent to feedback@ldsliving.com