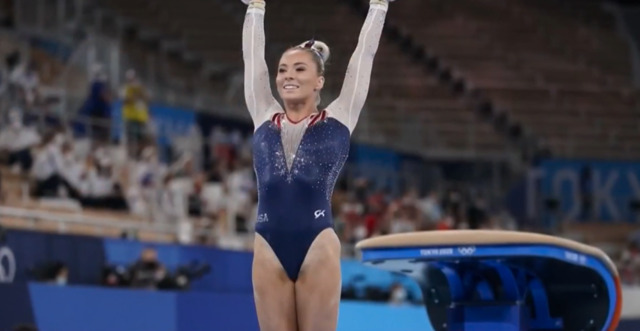 Seven days ago, a headline on ESPN read, “MyKayla Skinner’s Olympic gymnastics experience did not have to happen this way.” It seemed that after dedicating the majority of her young life to the sport of gymnastics and after battling back from injury as well as COVID-19 in the last two years, Skinner’s Olympic dream was over after just one night of competition. It appeared she would return home before the Games were even finished. She described it as “devastating.” But on Sunday in Tokyo, Skinner became an Olympic silver medalist.

As one sports reporter put it, “Considering she had already been eliminated from the Olympics, Skinner’s silver has to go down as one of the least likely medals in the sport’s history.”

So, how did Skinner go from being eliminated to the medal podium?

Skinner was reportedly packed and ready to head home when Simone Biles unexpectedly pulled out of the team competition. Almost immediately Biles thought of Skinner.

“Simone was like, ‘Text MyKayla and tell her not to go home in case she has to step in,’” Skinner told reporters. “She was on it like that.”

When her chance to represent the United States one last time came, Skinner was ready. “Looks like I get to put a competition leo on just one more time,” she wrote on Instagram. On Sunday in Tokyo, Skinner delivered in a big way receiving a 15.033 on one vault and a 14.800 on the other for a final score of 14.916. The score landed Skinner just behind Brazil’s Rebeca Andrade who won the event final with a score of 15.083.

Skinner has already announced her retirement from the sport following the Olympics. Her husband Jonas Harmer perhaps summed up Skinner’s story best on his Instagram.

“MyKayla is living proof that you can achieve whatever you set your mind to,” he wrote. “She set off on the Olympic route again two years ago chasing unfinished business from Rio 2016 and I’ve never seen more resilience in a human being. …The medal wasn’t won tonight but was won every morning when she got up and went to practice even though all parts of her body hurt.

“It was won every moment she didn’t give up despite injuries, illness, postponement, and every setback in the books. You see the medal but don’t see MyKayla with ice packs on her body every night before bed or tears in her eyes every time something came up and she had to ask, ‘Is this it?’ Words can’t describe how much she inspires and motivates me and how proud I am of her. For now, I am excited to finally enjoy some alone time with my wife. Gymnastics has had its fair share for long enough now.”

In our LDS Living May/June cover story, Skinner spoke of finishing her gymnastics story and why she couldn’t quit without giving the Olympics one last shot. On Sunday, she turned the final page of that story to find herself standing on the Olympic podium with a silver medal draped around her neck.

What an ending for Myk. 🤩 #TokyoOlympics pic.twitter.com/UUPjvzls29