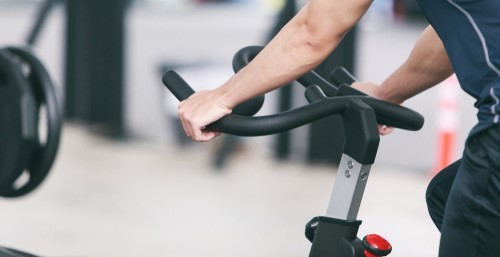 Latter-day Saint Psychologist: Why You Might Still Struggle with Anxiety (or Other Mental Health Issues) Despite Your Best Efforts

I recently experienced a couple of events that taught me about why some trials persist even though we are working hard to defeat them. Before I tell you about that, I need to provide some background. First, you should know we currently have two children at BYU-Idaho in Rexburg. Second, you should know that we live in Vancouver, Washington, which is about 700 miles from there. Third, I should tell you that I enjoy indoor cycling, which is a specific type of stationary bike—some know it as spinning. Please bear with me while I explain how these things are related.

About 10 days ago, I was sitting at home doing an online training for work. My wife was substituting at a local preschool. About 10 minutes before I expected her to come home, she called and told me that one of our sons had just had a grand mal seizure, sustained a serious laceration to his nose, and was being rushed to the hospital by ambulance. Fortunately, his older brother was there with him and was able to provide some comfort and direction. Knowing the immediate crisis would be long over by the time we could get there, we sat helplessly and relied on texts and phone calls to get updates. He was treated and released, discharged with instructions to follow up with a neurologist.

My wife and I were very anxious about the situation. We both knew that it could take weeks or months to get an appointment with a neurologist. Frankly, we didn’t want to wait that long to get resolutions to our multiple questions about our son’s health and prognosis. I called several neurology offices in the greater Rexburg area, but they were all closed for the weekend, which meant the next 72 hours would likely be filled with uncertainty and stress. The following Sunday was Fast Sunday, and we decided to fast for our son and for the ability to have him seen by a neurologist as quickly as possible. Many family members joined in the fast as well. I’ve fasted many times in my life and can honestly say that they have varied in terms of quality and sincerity. But this time my fast was quite earnest and heartfelt. I poured out my soul to my Father in Heaven, expressing my gratitude for all we had and explaining my current situation. I pled for His help with genuine intent.

►You'll Also Like: Latter-day Saint Psychologist: When Trials Seem to Come at the Worst Times

On Sunday afternoon, still fasting, I returned home from a presidency meeting. As I was driving, I had an intense feeling of spiritual confidence. I knew everything was going to work out well. I still had no answers regarding medical appointments, but I had an unmistakable feeling that God would take care of things. It was a sweet experience, and I knew it was an answer to my fasting and prayers. The next morning, I gave my son some phone numbers of local neurologists. A couple of hours later, he called back and said that one of the offices had a cancellation and they could see him the next day. In the space of about one week after his seizure, he had his neurology appointment, received an epilepsy diagnosis, got an EEG and MRI, and has been put on medication to help prevent further seizures. What I thought would take months to resolve has now been addressed. While there is still a long road of adjusting and worry ahead, I have greater peace about the whole situation.

Now rewind to before the epilepsy diagnosis. About four days after I had received the heavenly manifestation that things would work out and after the neurology appointment had happened and procedures had been scheduled, I was struck with intense feelings of anxiety and doubt. Did I really believe that things were going to work out? What if the medical tests revealed something more serious? Did the medicine have serious side effects? Would he be able to serve a mission being on such medication? My mind exploded with questions and my heart ached with fear. However, one question loomed larger than them all. Why was I having such doubts so soon after I had experienced such great feelings of peace? Why wasn’t I able to take the Lord at His word and calm my fears? It had only been a few days since I truly believed things would be okay, and yet I sat there doubting and fearful. I puzzled and pondered over my lack of faith.

Here is where my love of indoor cycling made an unexpected appearance. As I considered my son’s situation and my returning fear, my mind oddly turned to a memory of being at the gym. I had been there just a few nights before and ridden an indoor cycle. If you have never been on such a bike, you should know there is a small, red knob that is used to change the resistance. If you turn the knob to the left, there is little opposition when you push on the pedals. I could ride one of those bikes all day long with the knob all the way to the left. But as you turn the knob to the right, the pressure increases to the point where it takes all of my strength just to get the pedals around a single rotation. Throughout my last workout, I had adjusted the resistance knob. Sometimes I turned it to the left for a small break, but for most of the 60-minute session, I’d have heavy resistance that resulted in serious cardiovascular effort. At times I noticed that I was not working as hard as I probably should, so I’d turn the knob to the right and increase my efforts. Even though it was harder and increased my physical distress, I knew it was the right thing to do in order to meet my fitness goals.

I wondered why my mind would shift to that night at the gym while I was trying to figure out why I was struggling to have faith in the Lord’s reassurances. What in the world did indoor cycling have to do with a crisis of spiritual confidence? As I reflected on the strange analogy, the Spirit taught me a lesson: “When I spoke peace to your mind and heart on Sunday, that was a gift of faith. But it doesn’t stop there. I need you to build upon that gift. How are you going to get stronger if you don’t have some resistance? You can spin your faith all day long if we leave the knob all the way to the left, but if you are going to progress, I’ve got to turn it to the right, and have you push a little harder.” It made perfect sense to me. How could I expect to grow spiritually stronger with no resistance? Where the Lord was trying to help me become stronger, the adversary was tempting me to abandon faith and forget my previous experience. Increasing spiritual strength would only be possible through opposition, and my work of personal growth continued.

►You'll Also Like: Latter-Day Saint Psychologist: 4 Ways to Reduce Anxiety, According to the Scriptures

I remembered a scripture from the Book of Mormon. Alma the Younger had gone to battle, striving to quell a Nephite rebellion. As he fought with the apostate Amlici, Alma needed greater strength to prevail. “And it came to pass that Alma, being a man of God, being exercised with much faith, cried, saying: O Lord, have mercy and spare my life, that I may be an instrument in thy hands to save and preserve this people” (Alma 2:30, emphasis added). Alma was “exercised in faith.” He wasn’t sitting down in faith, reclining in faith, or lounging about in faith. His faith was strong because he had exercised it. He had experienced resistance. His faith was challenged not only during the intense experience of his three days of unconscious pain and suffering, but in the years of faithful struggle that followed. I imagine there were many times where doubt was introduced, and instead of succumbing and hopping off the bike, Alma pushed harder, labored heavier, and grew stronger. The concept of “exercising” our faith has new meaning to me. It means that I cannot get more faith unless my current faith is tried, and then I push back with as much belief and hope as I can muster.

What does this have to do with chronic anxiety, or chronic depression, or any chronic weakness we might experience? I work with many people who have suffered from mental health issues for numerous years. We talk about strategies to address their symptoms. They go home and apply those strategies. They come back and say, “I did what we talked about, but I still have anxiety. It’s not completely gone.” Or they will make good progress for a time, but then come in one week and say, “My depression symptoms are through the roof again. It’s like all the work I’ve done isn’t helping; I feel like I’m back at square one.” Understandably, they want all of their symptoms to resolve quickly and permanently. What’s even more frustrating is that so many pray for relief, sincerely asking Father in Heaven to remove their symptoms, yet the symptoms remain or even increase at times.

For a moment, please picture yourself in a heavenly gym. Your loving Heavenly Father is your personal trainer. Those who successfully “work out” with Him eventually develop His characteristics. As you pedal the indoor cycle of faith, you wonder why He keeps turning the knob to the right. Perhaps you feel like you’ve done great work and made good progress, and yet He introduces more resistance. In your mind, you think, “Why does He have to keep turning it up? Why can’t we just stay at this level?” There may be other times, when stress is particularly high, when you think “Why can’t we just turn that knob all the way to the left? Why can’t we just get off the bike and sit in the hot tub for a bit?” Your Heavenly Coach, who knows your capacities and potential so much better than you do, perceives your thoughts. He smiles, turns the knob a little to the right, and says, “You can do this. I’m right here beside you. I’ll never give you more resistance than you can handle. I’ll help you along the way. Keep pedaling; you are becoming more like me even as we speak.”

My friends, please understand the wisdom in your trials and difficulties. I know they are hard. They are supposed to be hard. If they were easy, then we’d never grow stronger. Our merciful Father in Heaven does give us periodic breaks, but most of the time, the work of spiritual growth is difficult, sweaty and exhausting. The next time you feel like that resistance knob has been turned to the right, push back with even greater effort. Exercise your faith to choose obedience and belief. The results will be amazing.