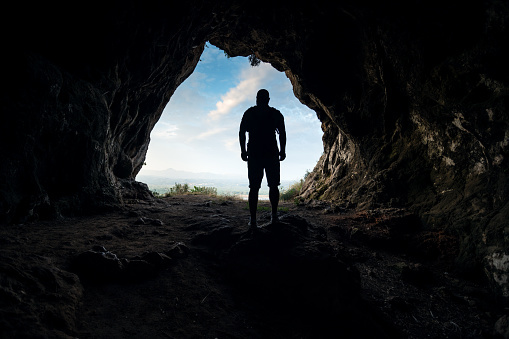 Listen: How One Family Found Light After a Devastating Diagnosis

The flashlight was turned off, and Jon was enveloped by complete, near-palpable darkness. Though no light was visible, Jon knew that a flip of a switch could dispel the dark of the cave and re-illuminate the cavern. The lesson would have far more implications than Jon could have ever imagined.

Years later, Jon received a call from his wife, Emily, asking him to come to the emergency room. As the father of three adventurous boys, Jon was not overly concerned. When he learned that the trip to the hospital was for his wife, however, and the doctors had found a lump in her chest, he not only panicked but fainted.

Emily’s official diagnosis was T-cell lymphoblastic lymphoma, bringing darkness to Jon’s life for which there seemed no switch.

“It was a feeling of being very alone. It was a feeling of extreme sadness,” he said. “And going back to that cave as a young man, and that very palpable darkness, that is what I experienced again. But this time, there was no just turning the headlamp back on and moving forward.”

Rather than the standard four-month treatment plan for lymphoma, Emily instead went through leukemia treatments, necessitated by her particular form of lymphoma.

“It made it very difficult,” Jon said. “There were several setbacks, and it just was something that caused a lot of confusion for us.”

Finally, while at a resort for a weekend away, Emily began experiencing terrible pains in her bones. She and Jon traveled to a hospital and learned that her situation was grave to the point that Jon called his in-laws and told them they should get down to Virginia to see their daughter for the last time.

“She was already kind of on death’s door at that point, but it became worse,” Jon said.

The Lord had not abandoned them, however, and He was ready to perform a miracle for their family.

To hear more about Emily and Jon, listen to the full This is the Gospel podcast here: