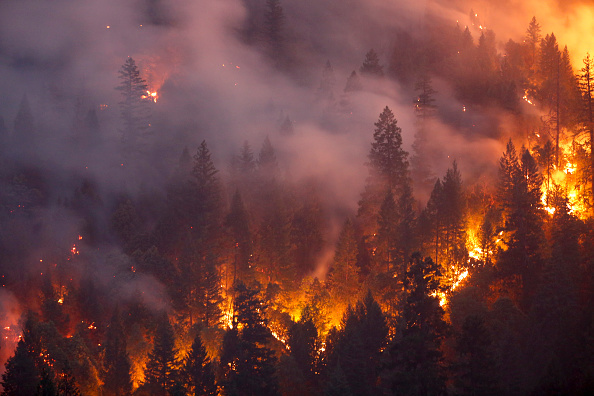 Listen: The Miracles That Helped a Family Find Each Other After Being Separated During the Paradise Fire

The sky was pitch black.

Not black like night, because it was definitely well past sunrise. Not black like the dark underside of rolling storm clouds, though ash fell from the sky like rain.

"It was dark and it was creepy," Emily says in a This Is the Gospel podcast.

It was the morning of November 8, 2018, and as Emily looked at the sky, she had no way of knowing that the Camp Fire was moments away from consuming her home.

► Also: A Prom for Paradise: How a Latter-day Saint Teen Organized a Dance for the Students Who Lost Everything

November 8, 2018, began like any other day for Emily and her family. Her husband, Nate, left for work; her son and daughter left for school. Emily was at home and nothing indicated that the worst wildfire in California's history was racing toward Paradise.

Fires were not uncommon in Paradise. Nestled in the Sierra Nevada foothills and with trees to spare, the small city had had its fair share of wildfires in the past. Other evacuations had happened before, but as a whole, Paradise hadn't suffered large-scale damage in recent years.

So when Emily's husband asked if he should come home from work, Emily wasn't immediately alarmed, but she told Nate to hold on while she called a friend whose husband worked for the Paradise Police Department.

At first, this friend assured Emily that there was nothing to worry about before hanging up the phone.

Soon after, Emily's husband walked through the door. He said that the fire was so bad he thought they should evacuate—now. At this point, Emily hadn't looked outside, but after opening the backdoor, she felt confused by what she saw. It was morning but the sky was dark, and what had sounded like rain moments before was actually heavy ash hitting the dead leaves on the ground.

It was like nothing she had ever seen before, and that's when Emily knew she wanted her children home—now.

Emily and her husband began repeatedly calling and texting their two children, Alex and Audrey, until at last, they were able to reach them. Fortunately, Alex, who was in college at the time, had gone to Audrey's high school after his classes were canceled. Together, Alex and Audrey drove home.

The family was finally ready to evacuate together when their phone rang. It was a dear family friend who needed help packing some treasured items before evacuating.

Emily hesitated. She knew the fire was bad, but she didn't know how bad. And now an elderly neighbor was asking for help. Could Emily turn her down?

After a pause, Emily agreed to send Alex to help as she and the rest of her family finished packing. She told Alex that after helping their neighbor, he should drive straight to the nearby town of Chico and meet up with the rest of the family there.

Alex never made it to the neighbor's house.

Meanwhile, wanting to save as many assets as they could, Nate left a truck while Emily finished packing, not knowing that her home and everything in it would be destroyed in a matter of hours. Then Emily got a call from Alex.

Urging her son to just drive straight to Chico, Emily and her daughter, Audrey, immediately left the house and began driving. They didn't make it far before hitting deadlocked traffic on the only road to Chico as thousands of Paradise residents fled from the fire. To make matters worse, Emily was in a cell service dead zone. She wouldn't be able to reach Alex or Nate until the traffic, which was at an absolute standstill, began moving.

"It caught me off guard and I looked at it and it was Nate," Emily remembers. "He asked me where I was and I told him and he said, 'Em, you need to leave your car. You need to go.'"

Agreeing to meet Nate somewhere nearby and leave together in a truck, Emily parked her car on a side street and stepped out into the dark with her daughter.

"I remember thinking, 'This is hell. This is a living hell,'" Emily says as she and Audrey struggled to make it to the meetup spot. "And I remember thinking, 'This is what Satan wants us to always feel like. And at that exact same moment as I thought that, I felt this perfect bubble of Heavenly Father around me. And I could look in the distance and I could see dark, but yet I felt safe because I knew that Heavenly Father was there and He was protecting me."

After walking a short distance, Emily and Audrey turned a corner to see Nate running toward them. However, there was still one member of the family missing. Alex, who had tried to drive to Chico per Emily's instructions, had also been caught in deadlocked traffic. Alex then called Nate, who told his son to get out of the car and run to meet him, Emily, and Audrey.

Alex was now at a catch-22. He could stay in the car and risk the flames catching up to him. However, Alex also had asthma, and without his inhaler, the smoke he would inevitably breathe in while running to meet his family could trigger an asthma attack.

Taking the risk, Alex left his car and began sprinting meet up at the spot Nate had parked the truck.

But when Emily, Nate, and Audrey reached the truck, Alex wasn't there.

Trying to stay calm while her calls to Alex went unanswered, Emily couldn't help but notice the ash was so thick on the trees it looked like snow. The fire was getting closer and she still didn't know where one of her children was.

Then, mercifully, Alex called. He told Emily to get everyone in the truck and drive, that he was moving faster than the deadlocked traffic and he would catch up with them.

After Emily hung up the phone, Nate took off, determined to find Alex. Nate had only gone a short way when he yelled back that he could see Alex and that everyone should get in the truck.

Sweet, immediate relief filled Emily as she, Nate, Audrey, and Alex loaded into the truck and began driving away from the approaching flames.

"I asked [Alex] as soon as he got there, 'Are you breathing okay? How are you doing?'" Emily says. "[He said] 'Yeah, I'm fine.' And I know that it was Heavenly Father protecting him."

Emily and her family were lucky. They made it out of Paradise alive. But that didn't mean that it wasn't difficult to lose nearly all of their material possessions, including their business, their home, family pictures, childhood possessions, and heirlooms from Emily's deceased father.

"Even now, when I think of all of the items that I lost, it's devastating," Emily says. "And I think part of it is I think about my children and my future grandchildren and I don't have those things to share with them. I have the memories, but I can't really pass down memories."

Though Emily knows it's easy to be angry at God after losing as much as she has, she can't help but see God's hand in her life—guiding and blessing her before, during, and after the fire—as tries to move forward with her life.

"It's not going to be a short process," Emily says. "We all have a lot of grieving to do. And I think everyone is going to grieve differently. It's going to take different ways and different amounts of time,  but God, He's there. And He will be able to help everybody through it."

Listen to the full podcast episode below: