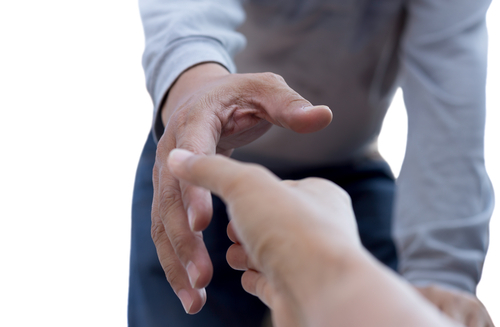 6 Ways to Rise Up to the Calling of Ministering

Shortly after the special announcement by President Russell M. Nelson that we would now be “ministering” instead of “home teaching” and “visiting teaching,” a concern came over me that the words “minister” and “ministering” may become commonplace, no longer representing a depth of sacred spirituality. Those terms have always brought feelings of reverence and sacredness within me. In my mind, these terms represent the greatest of all ministers—our Savior—and His miraculous work. I began to review my life for what I had learned of ministering and how these acts draw us upward toward a life in Christ.

Through church callings I was blessed to see—sometimes only known to me and the ministering brother or sister—outpourings of true loving service to others. While recently caught up in wonderful feelings of gratitude for loving kindness, there flowed into my mind a desire to record what I know of true ministering and the results brought into the life of the minister. President Henry B. Eyring has said, “One of the assurances that you are being purified is an increasing desire to serve others for the Savior” ("First Presidency Message," Ensign, March 2014). Clearly, ministering is essential in the upward personal journey to become Christ-like. Here are a few things my wife and I have learned as we have tried to ascend into ministering.

A: Ask daily and sincerely in prayer for opportunities to serve in any way the Lord desires of you.

My wife and I began making daily prayer requests for opportunities to serve after we were told through a priesthood blessing that my life would be extended. You see, at that time, we believed I was about to leave this life from a terminal illness I had suffered from for some time, but the blessing said we were given an extended “season” so we could continue to do the work of the Lord. We have been granted opportunities every day for merely asking to be given chances to serve. We hope to use our season well.

As Elder M. Russell Ballard counsels, “In your morning prayer each new day, ask Heavenly Father to guide you to recognize an opportunity to serve one of His precious children. Then go throughout the day … looking for someone to help” (Elder M. Russell Ballard, “Be Anxiously Engaged,” Ensign or Liahona, Nov. 2012, 31).

Lesson 1: By asking in prayer for opportunities to serve, we ascend spiritually through speaking our Heavenly Father’s language—the language of service.

S: Search in your heart and in your mind to discover the promptings that will be sent to you.

Answers will come from the Spirit if we but listen for them and act. As it says in Isaiah 32:3 “the ears of them that hear shall hearken.”

A neighbor once told us of a time when her day was not going well and life demands felt overwhelming. She had been told she was a stubborn person and had been searching for a way to resolve her feelings of inadequacy. She had become quite isolated and had no energy to participate in conversations or to try to put on a happy face. After a soul-searching self-interview and a prayer on how to get outside this struggle, a thought came that she needed to visit a single older sister whom she had not seen for some time. As the two sat together, the older sister talked about her early years raising her family. She said she came to know that her everyday acts were great in the sight of God. One cherished snippet of this conversation came when this older sister told her, “You are not a stubborn woman, you are a determined daughter of God.” The wise counsel from the older woman brought new insight to this forlorn younger woman. Both were ministered unto.

Lesson 2: When we diligently search for spiritual answers, we ascend in thoughts and feelings that promote our outward reach to others. We see this example in the life of our Savior as He fulfilled his mission by acting on His inner desire to serve “the one.”

C: Capture even the smallest possible opportunities by being observant, not overlooking the obvious.

“And the eyes of them that see shall not be dim” (Isaiah 32:3, emphasis added) and “by small and simple things are great things brought to pass” (Alma 37:6).

A young mother, divorced and raising three small children, recounted visits from her Church-assigned home visitors. These two kind, older men never failed to visit her for well over two years. She lived in an old and previously not well cared for house. Next to the front door, there was an outdoor leaking faucet that she did not have the funds to fix. She did not feel she should ask for help, however, she often wondered how her home visitors could not see this need, since they asked her at each visit if there was anything they could do for her. President Russell M. Nelson once shared a thought that might have helped these brothers and the young mother: “Surprise people with a good deed they hadn't planned on” (Russell M. Nelson, “Focus on Values,” New Era, 2011).

In contrast to the above story, we moved into our newly completed retirement house where we were trying to do all the landscaping ourselves. Several new trees sat out on the bare ground around the house waiting to be planted when a man who lived a few blocks away called and said, “I noticed you have some trees to be planted. I have a shovel and a day that is open. I will be right over to dig those holes and plant the trees.” He not only came to our house but he also brought a friend with him. I don’t know how we would have done the work by ourselves. This brother was the perfect example of President Nelson’s advice.

Lesson 3: When we look outward to capture the needs of others, we ascend in spirituality, as if looking through the Savior’s eyes.

E: Execute a plan of action, without delay, to fulfill whatever comes to your heart and your mind.

“But be ye doers of the word, and not hearers only” (James 1:22).  In line with this scripture, “never delay a prompting” was a favorite phrase of President Thomas S. Monson. It seems that the sooner we respond to the need, the greater the trust in us from the receiver and our Father in Heaven. Prompt action conveys the message that we really want to serve them.

Many years ago, I was serving as a called spiritual leader in our congregation. One late Saturday night, my sweetheart asked if I would go to the store to buy milk. As I drove past the home of one of the families in our congregation, I had a strong impression that I should stop. There were no lights on in the house and the porch lights were off. In a hurry, I drove right past the house, saying to myself that I would see how I felt on my return trip. Suddenly, the impression was so strong that I made a U-turn and went back to that house. I was worried that I was going to awaken this family with two small children, but I knocked lightly on the door. The porch lights came on. A woman opened the door holding the family’s 1-year-old daughter in her arms. She told me she was the children’s grandmother and that her almost 3-year-old grandson had been kicked in the face by one of their horses. His parents had rushed him to the emergency room. I went to the hospital and asked if the boy had been given a blessing. The father, who had not been attending church, said he did not feel able to do so, but together we gave a much-needed priesthood blessing. The little boy’s cracked facial bone mended, plastic surgery was later provided, and healing took place to the point that no one would know that he had gone through such trauma. But an even greater miracle occurred: This young father returned to church, deciding to regain spiritual nourishment he had been missing.

Lesson 4: Each time we execute a plan, swiftly responding to spiritual promptings, we may very well be ascending to a spiritual life wherein the Savior spent His life, doing the will of the Father without delay.

N: Nurture persistence, just short of being obnoxious, to show that you really do want to help.

“Unwearyingness” (Helaman 10:4) is the watchword in this lesson on ministering. Follow Nephi’s example in the way he spread the word of God. Some individuals will almost always decline help because they feel they are imposing, don’t see themselves as worthy of help, or just don’t know how to accept the offering. Don’t give up easily.

My wife and I can be difficult to serve. We will eat almost anything you bring to us, but we would hardly ever ask for someone to take their valuable time to do something for us. When we moved to a new area where we did not know many people, our assigned home visitors were the kind of men who would surely do anything we requested, but we would not ask. They caught on quickly to our reluctant ways, stopped asking, and just started showing up. I was going through a long-term illness and trying my best to do all the needed things around our house. I would be working in the garage when one of these good men would come walking right in. He would tell me he had a few hours with nothing to do and then would ask me to show him what I needed done. That approach is difficult to turn down. On many occasions, these two good men would simply show up and offer their time or give me a  call to say they had nothing more to do that day, afternoon, or evening than to come and help us. Their ministering continues on to this day.

Lesson 5: Oh, what an example of persistence we have in Jesus. His diligence comes from His love for us. We, too, may ascend to such a place of strength as we persist in providing service to others.

D: Delight in the gift God has given you to walk the disciple’s path and become more like Jesus Christ.

“Thou shalt rejoice before the Lord thy God in all that thou puttest thine hands unto” (Deut. 12:18).

In an interview with a good man who failed to complete his previously expected monthly visits to his assigned families, he informed me that he did not like going on these visits. He then said, “But every time I go I have the most wonderful experiences and positive feelings that last for days—even sometimes weeks. It is just getting out the door that is hard. I truly do love those families.”

In a similar way, I have often had a thought that extends, for me, to an Old Testament scripture in Psalms 30:5. After speaking of anger and sorrow, the Psalmist says “joy cometh in the morning.” By regularly ministering to our brothers and sisters, we may experience mornings of awakening with a sense of purpose and fulfillment. The delight that comes in serving others is not something that we create, rather it is a feeling we are given by the Holy Spirit. He is revealing that we are living out what we were designed to be as servants of our God.

Lesson 6: We ascend in spirituality as we delight in becoming what God created us to be.

As we do all of these things in our ministering efforts, our capacity and desire to become like Jesus Christ and ascend to heaven will increase, reminding us that “By this shall all men know that ye are my disciples, if ye have love one to another”  (John 13:35).