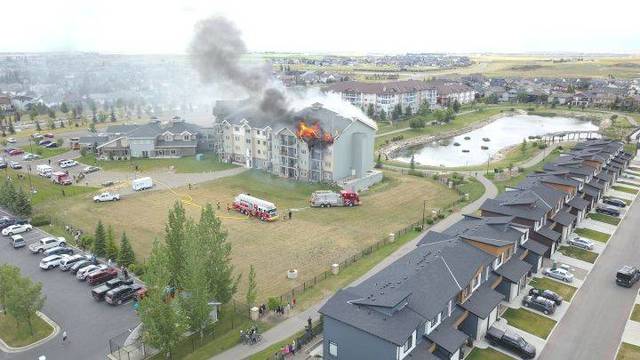 Missionaries, Members Help Evacuate 140 Seniors During Large-Scale Fire: "It Was Nothing Short of a Miracle"

On Tuesday afternoon, a fire suddenly blazed at a senior living complex in Lethbridge, Canada, destroying the top few stories of the building.

“This sort of fire is a fire chief’s and a firefighter’s worst nightmare,” Lethbridge Fire Chief Richard Hildebrand told the Lethbridge Herald.

As residents began fleeing the building, Latter-day Saint Joe Paul rushed to help evacuate residents before first responders could arrive on the scene.

“I noticed there was smoke coming out of the top of the building here, so myself and a couple of our people ran over and went into the building and started getting people out,” Paul told the Lethbridge Herald.

The LDS Church neighboring the senior complex began taking in the evacuated residents as Paul continued to help those still in the building.

“I grabbed a fire extinguisher off the wall in case I had to use it to put myself out if I got on fire but I went in and just started going into rooms and pulling people out,” he told Global News. “I probably evacuated 50 people out of the different rooms and then health-care people started showing up; they didn’t even know the place was on fire. A lot of residents didn’t know it was on fire,” he told the Lethbridge Herald.

But Paul, a Search and Rescue volunteer back home in Salt Lake City, Utah, wasn't the only one to rush to help.

Eighty missionaries from the Church immediately began assisting residents as they left the building, bringing them to the Church and trying to comfort them in the middle of the crisis.

“It’s nothing short of a miracle that there wasn’t a single person hurt in this fire," Hildebrand told the Lethbridge Herald.

Mormon Life Missionaries FireMissionaries,Fire,Mormon Life
Comments and feedback can be sent to feedback@ldsliving.com