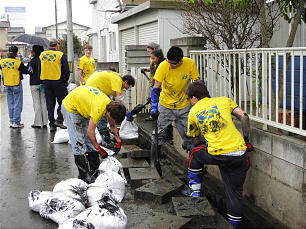 The priests at Meiji Shrine in Tokyo — a shrine of such importance in Japan that it can be compared to the National Cathedral in Washington, D.C. — recently invited Church leaders here to describe how Latter-day Saints conduct their humanitarian efforts around the world, but especially in Japan following the earthquake and tsunami in Tohoku.

Meiji Shrine is in the heart of Tokyo and was built in 1910 to honor the Emperor Meiji who re-opened Japan to the world in the 1860s. It is one of the three most important shrines in the Shinto religion and is a Tokyo landmark known to almost every visitor from abroad.

The invitation from Meiji came following an unusual — at least in the eyes of the Meiji priests — service project by Christian missionaries at one of their shrines in Tagajo, just outside Sendai. Missionaries from the Tokyo Mission of the Church rode the bus all night to spend the day cleaning the Yawata Shrine, one of the many Shinto shrines damaged by the tsunami. The Yawata Shrine is hundreds of years old and is designated as a Historical Legacy Site in Japan.