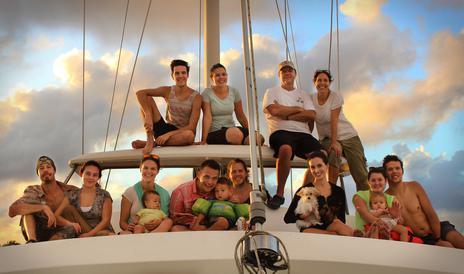 Mormon Family Raises 7 Kids on Boat in the Caribbean

Seven kids, one boat, and a whole lot of adventures. Find out what one LDS family has learned by making their home on a boat in the Caribbean.

Tracy and Christa Prows decided to make their dream a reality around 1996.

The couple's big plan: sell their 10-acre home and farm in Bear River City, Box Elder County; move to Florida; and buy a boat big enough to house their family of seven children for years to come.

Christa Prows admitted it was unconventional.

"No one was determined to talk us out of it. It was more like, 'Why in the world are you doing that?'" Prows said. "People couldn't understand. They thought we were being irresponsible, but it was something we were driven to do."

And so they did. That year, the Mormon family bought a catamaran and named it the Liahona. A few years later, when they had liquidated all their property and assets, they loaded up the children and set sail in the Caribbean.