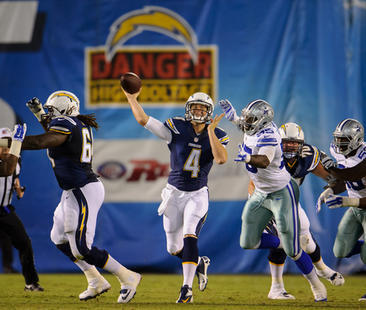 MR says: We could have a pair of LDS brothers playing in the NFL pretty soon. Check out what these incredible athletes have to say about their faith and their missions.

More than 370 sets of brothers have played professional football, according to the Pro Football Hall of Fame.

Brothers Brad and Daniel Sorensen would like to join the uncommon fraternity this season.

Brad Sorensen, 27, is now with the San Diego Chargers as a third-string quarterback. Daniel Sorensen, younger by two years, is third on the depth chart at free safety for the Kansas City Chiefs.

Born into an athletic family in Colton, California, the Sorensen boys grew up competing against each other. Now they share the common goal of each making their respective teams, which happen to be AFC West division rivals.

Off the field, the brothers have much in common. They agree their football careers have benefited greatly from valuable lessons gained while serving as missionaries for The Church of Jesus Christ of Latter-day Saints. Also, both of their wives recently gave birth to sons. Sharing similar experiences at this point in their lives has been a blessing.

“It’s a special bond,” Brad Sorensen said. “Knowing each other, how our personalities are, knowing how we work, how to push each other … it’s something special we can talk about.”

After high school, Brad Sorensen served his Mormon mission in Spain. He was fond of the culture and people, he said, but didn’t bring many converts into the LDS Church. In the process, however, he learned the meaning of perseverance.

“Spain is a wonderful country,” Brad Sorensen said. “I loved the people, but the missionary work was really hard. We didn’t see the success that other missionaries think of. People didn’t want to listen or have anything to do with you. We saw success in our own ways, and it helped create a sense of resiliency. I learned a lot of principles on my mission that translate to life. Being tough is the one I point to the most. Even when you struggle, you’ve got to keep going out and doing your job, knowing that if you are doing all you can, the rest will take care of itself.”