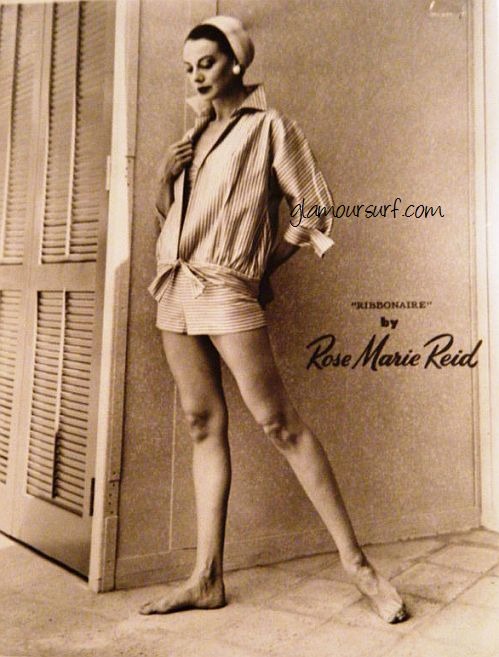 Mormons Who Have Shaped the Fashion World

When she was a young girl in the 1920s working in her parents’ store in Utah, Rose Marie Reid never dreamed that she would one day become one of the most famous swimwear designers of the 20th century. Her mother taught her to sew like an pro, and she put those skills to good use when later Rose Marie’s husband asked her to make him a pair of swim trunks. Her husband took his fancy new trunks to department stores, and before she knew it, Rose Marie had a budding fashion label on her hands.

Her swim lines grew from six a year to 100 a year as her popularity took off. By the late 1950s, her company was making millions. Big stars like Rita Hayworth, Jane Russell, and Marilyn Monroe loved wearing her beautiful one-piece creations. Time magazine even named her “Woman of the Year” in 1955!

When the Church was building the Los Angeles California Temple, Rose Marie wanted to help as much as she could. She designed a beautiful one-piece white swimsuit that was covered in hand-sewn sequins. And which hands sewed most of that sequins on? Relief Society sisters that Rose Marie enlisted to help. All the proceeds of this particular swimsuit went directly to help build the Los Angeles California Temple in the 1950s.

But then came along the bikini. Rose Marie rebuffed the new midriff-bearing trend and decided to continue to make only one-pieces suits. But now that her company had many designers and corporate pressures to deal with, bikinis were made with the Rose Marie Reid label, although she never was happy about it.

And she never once designed a bikini.

She ultimately left her own company that she had strived so hard to create—over modesty.

Meet Cécile Pelous. She’s a humanitarian, a fashion designer, and a Mormon.

Over 20 years ago, she made her way into the fashion scene in a big way by designing for some of the world’s most renowned fashion houses, or maisons de mode: Christian Dior, Nina Ricci, and Yves St. Laurent. She would often have the responsibility of turning a sketching into a real, tangible piece of clothing that a pattern could be made from for mass production.

With a solid place in the Paris fashion scene, you might think that Cécile would have found her place in the world. But she knew she could do—and be—more. So she wrote to Mother Teresa, flew to India, and started caring for lepers under Mother Teresa’s guidance.

Five years later, after visiting Nepal, Cécile decided to start her own house for orphanages in Nepal. She would visit twice a year every year, while still working for the fashion world—which is a role demanding enough without having to take care of 79 Nepalese orphans on the side. But it was worth it. Listen to her story in her own words in her “I’m a Mormon” video.

For 30 years, Robert Comstock has been designing menswear in New York City for some of the finest retailers in the world. His company, Comstock & Co., specializes in outerwear and rugged outdoors menswear. His studios in Manhattan are home to hundreds of fabrics and scattered design boards. His designs couple high fashion with high adventure. He’s a well-known designer among the fashion world of New York, and he does it all while being a single dad of two rowdy boys.

But his designs are still highly sought after by big name retailers like Bloomingdale’s. His life story just goes to show that you can be a Mormon and a fashion icon at the same time. Watch him tell his story in his own words in his “I’m a Mormon” video.