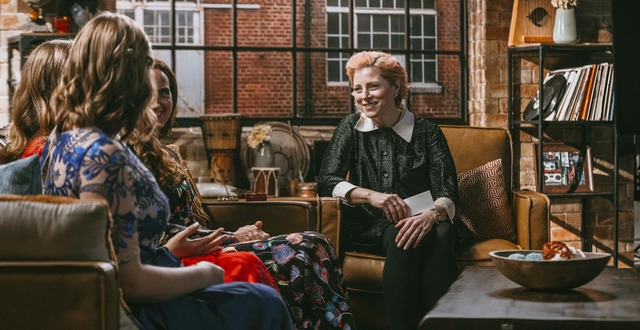 Elaine Bradley is best known as the drummer of the rock band Neon Trees. Latter-day Saints may also remember her from her “I'm a Mormon” video, which has received millions of views since its release in 2014. In this week’s All In podcast, Bradley explains how a life of actively following Christ is not a life of ease, but a life of peace for which “there is no counterfeit.”

Morgan Jones: One of the reasons that we started this podcast, Elaine, is because we wanted to show that the decision to stay [in the Church], many times, is just as deliberate and thoughtful as the decision to leave. So for you, why have you decided to stay and how has that been a thoughtful, deliberate decision on your part?

Elaine Bradley: I think I've decided to stay because I have left and realized that there's really nothing out there for me that's better. And I've never left in an angry way, and I've actually never not believed in God. But when I didn't care what that meant for me, it was more like, “I'll just—you take it or leave it, I'll leave it. I'll just leave it alone for now.” I don't think I've ever really left, but I've left it alone for seasons. And in doing so . . . something always just gnaws me back into action, if that makes sense.

Obviously, I can't say what's in other people's hearts, or other people's minds, or what happens to people and why they make the decisions that they do, but I can speak to why I make the decisions I do. And there is nothing that I would like more than for the Church and the gospel to be not true, so that it would let me off the hook so I could do whatever I wanted, whenever I wanted. I think that's the basic human desire, like, “I want to do what I want.”

Growing up, I never felt like a fealty to God more than I felt like a resentment that He was there. I never questioned that He was there. It was just, “Oh, what am I gonna do about it? How am I gonna feel about it?” So, as a kid, I always kind of resented it. And it was kind of an inconvenient truth. It was very annoying to me that there was a God, because that had to mean something. And I didn't want to know what that meant, because I wanted to do what I wanted to do. So, that kind of dumb stuff. As I got older and realized that my own choices and the things that I want to do in my selfish way—they don't really bring me joy or lasting happiness or any kind of meaning and fulfillment, just by sad experience. And then trying to understand, “Okay, well, then what does?”

To me, it's not even fulfillment or joy in the overt sense, but to me, the reason I stay, if I could sum it up into one thing, would be peace of conscience. It wins every time. So when I have done things that I knew I probably shouldn't do, I'm not even talking about drastic things, just things that I'm like, “Ahhh, this there's a cognitive dissonance happening, and I'm gonna ignore it, and I'm gonna do the thing.” There's just no peace. . . . that I can find. There's no counterfeit I can find for peace. There's just nothing I can do, except for repent and try and do what I have experienced, through the Spirit, is true and real and important for this life and for the next—so the lasting stuff. And it's not always the most convenient or enjoyable stuff now. I mean, having kids is the greatest and the worst at the same time. You can't have the one without the other, like the same thing for when I served a mission. It was the worst thing in the world, but at the same time, it brought me so much joy, but I hated it, but I also really enjoyed it. Everything that's worth anything comes in a complete package of good and bad, and discomfort and comfort. I just don't think you can separate the two.

So if you're looking for a life of ease, you're going to miss out on the peace. That's a long-winded answer, I'm sorry about that. I remember I taught Sunday school to the teenagers at the [ward] I was in [while I was living] in Orem, before we moved to Germany, and I really enjoyed that calling so much. But once I was like, “You guys, why do you want to go to heaven?” “Oh, so we can go to heaven.” But why? Do you really? But really, do you want to go to heaven? And if you do, why? And my answer is not because—like, I don't care about kingdoms of glory, I really don't look forward to that. I don't care about mansions. It's really not that important to me—but I don't want to go anywhere where I'm going to feel uncomfortable for an eternity. I want to go where my God says I'm supposed to go because I think that's the only place where I'm actually going to feel peace. So that's really my utmost desire for wanting to go to heaven, is just because I don't want to feel tortured.

Elaine Bradley is the host of Grace Notes, which airs Sundays at 11 a.m. MT. BYUtv streams for FREE – download the app or go to www.byutv.org. The network is always streaming live, and past and current episodes are all available to binge.  BYUtv is also available in more than 50 million homes in every state of the country on DISH Network, DirecTV and 146 other major cable systems.