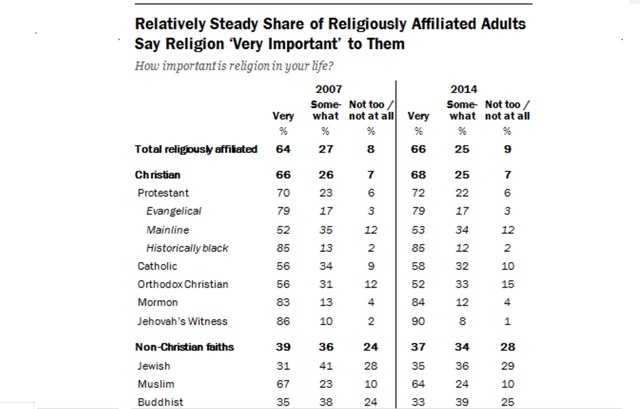 A recent Pew study shows that while most Americans are becoming less religious, the number of Mormons who find religion an important, regular part of their life is holding strong. In fact, the study, which shows the evolution of religious attitudes by comparing data from 2007 and 2014, shows a slight increase (from 83 to 84) in the percentage of Mormons who see religion as a very important aspect of their life, making Mormonism among the top three religions with the most invested members of those studied.

Mormonism also ranked as the second religion with the highest percentage of worshippers who pray daily and attend church weekly, following behind Jehovah's Witness. Since 2007, the percentage of Mormons who pray daily rose from 82 to 85 percent, and those who attend church weekly also rose from 76 to 77 percent. So while the rest of the world has begun straying away from religious worship and a belief in God, Mormons continue to hold strong or even increase in faith and regular worship.

Mormonism is also among the top two faiths where its worshippers feel a strong sense of gratitude (89%), read scriptures (76%), think about the purpose of life (71%), and participate in religious study groups (64%) at least weekly. However, Mormonism fell into the sixth place for the percentage of members who share their faith weekly (24%).

Among all US adults, the percentage of those who believe in God, pray daily, attend services at least monthly, and view religion as important in their lives dropped from 3 to 4%. However, those who "feel a deep sense of spiritual peace and well-being at least once a week" rose by 9% to roughly 60%, meaning that though Americans are becoming less religious, they are becoming more spiritual.

For Mormons, the percentage of those with weekly spiritual experiences is significantly higher, about 8 out of every 10.

In addition, the study revealed some interesting trends in the social and political views of Mormons. For example, Mormons are now 50% more likely to say homosexuality should be accepted by society than they were in 2007, the percentage jumping from 24 to 36 over the past 7 years. However, Mormons' views on abortion haven't changed, with 27% still believing it should be legal in most cases.