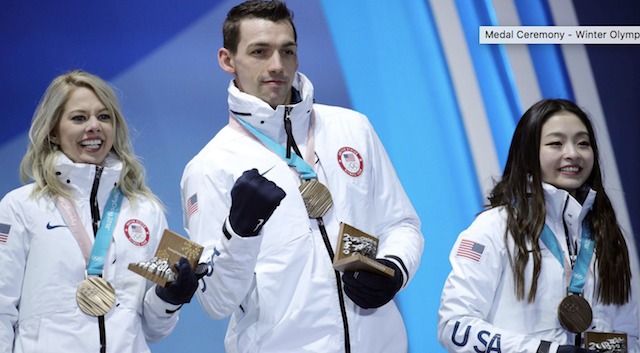 Olympic Medalist Honors LDS Father in the Most Touching Way

Standing on the podium wearing a bronze medal, no one would have noticed the small memento Chris  Knierim kept under his shirt. The memento, kept close to his skin, was a pair of dog tags—his father's dog tags.

According to an article by The San Diego Union-Tribune, those dog tags were in honor of Chris's stepfather, an LDS man named Jeff Knierim—a battle-hardened soldier who would tear up every time he heard Chris introduced as "representing the United States."

Jeff adopted Chris at a young age, being sealed to him and becoming the only father Chris knew.

Standing on the podium with his wife, Alexa, Chris kept those dog tags—a gift from his mother—close because, at what would most likely be his last time at the Olympics competing in pair skating, his father was not there.

In April 2017, the man who had raised Chris from the time he was six months old passed away from a brain aneurysm at just 49 years old.

“I was crushed. Devastated. Broken,” Chris wrote on a social media post. “But again, I was brave on the outside. After all, we were heading into the Olympic season and there was no time to cry. I worked through the days I was empty inside and skated for the pride of my father. I wanted to make his sacrifices for me worthwhile.”

And Jeff had sacrificed for his family. Besides serving in the military during Desert Storm and suffering from exposure to sarin gas that led to life-long health complications, Jeff worked hard to provide for his wife and four children as an IT network engineer for Cisco Systems.

And he always believed in Chris. In fact, when Chris's costume for the World Championships cost $1,500, Jeff sold one of the family cars to pay for it. And a few days before his death, Jeff sent this touching message to Chris and Alexa: “Being WARRIORS is in your blood, just let it out and you will conquer every goal you set. So proud of you two. It’s more than a dad could ever express.”

Standing on the Olympic podium with his wife, medal in hand, Chris knew that was true, especially in that moment.

Click here for the full story from The San Diego Union-Tribune.

Mormon Life Olympics MormonOlympics,Mormon,Mormon Life
Comments and feedback can be sent to feedback@ldsliving.com