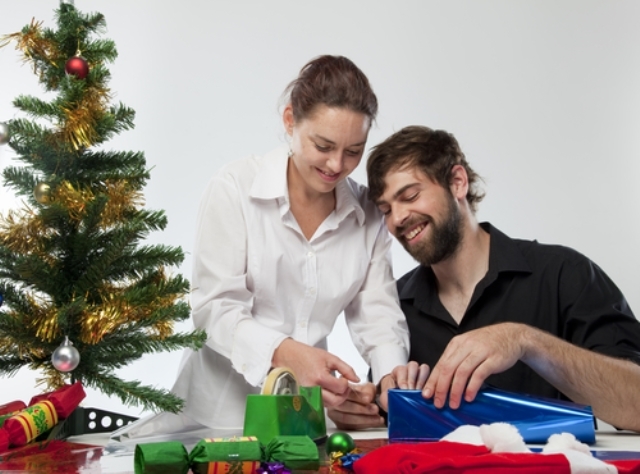 byC. Terry Warner adapted from "Bonds That Make Us Free Healing Our Relationships, Coming to Ourselves" | Sep. 24, 2018

With different opinions and needs in a marriage, it is important that we remember to think of our spouse as a person with feelings and needs. The following true story helps illustrate how a simple change in perspective and a desire to help each other can make all the difference in helping us break out of a pattern of unintentional self-sabotage.

When Becky and I got married, I discovered she was just about perfect. In fact, that was her one fault—her perfection. She was determined to do every “supposed to” she had ever heard. It was clear to me that she would be more happy and less frustrated if she weren’t always preoccupied with her lengthy list of “supposed to’s.”

The longest part of this list concerned Christmas and the elaborate preparations required to make it perfect in every way. In Becky’s mind, you could not give a gift unless you made it yourself . . . from scratch. To buy a gift was thoughtless. It didn’t show you really cared. Initially, we would begin in October; later we started in September, then August—then even June! The black hole called Christmas was widening and swallowing up the entire year.

But what bothered me most was Becky’s saying, “I’m the only one who cares about Christmas. If it weren’t for me, we wouldn’t do anything nice.”

Then we started exchanging gifts with other families. Don’t ask me what got into us. The other families would give a book or some jam or a box of cookies. We made raspberry yogurt, with raspberries we had grown ourselves in the summer and frozen, or granola loaded with chopped dried fruit, which we had also produced ourselves. And of course we couldn’t just take the stuff to people’s houses. We had to sing carols on the doorstep. In parts.

As we’d sit in the kitchen helping the children decorate the bottles or boxes for the food we would deliver, or glare at each other on somebody’s doorstep, I would think that here we were, night after night, doing all the peripherals, the showy stuff, the trappings of Christmas, without any of the spirit of Christmas, which was what my wife said this was all for. More than once I’d lie in bed, too tired and irritated to sleep, mentally composing a Pulitzer-prize-caliber short story entitled “The Woman Who Destroyed Christmas.”

Several years after the Christmastime conflicts Glen asked Becky to write her recollections of them.

When we were first married I had looked forward to building traditions that would hold our family together, and Christmas was the best opportunity to do that. Since the essence of Christmas was sharing something of oneself, making gifts was important, especially because in those days we didn’t have much money. Because Glen did things like that before we were married, I had every reason to think he would share this commitment. But then I discovered that he was content to postpone what had to be done for Christmas. He was clearly anxious to get the preparations over with; his work seemed to matter to him more than the family. He was willing to dash out at the last minute and buy things that weren’t meaningful. That was the very opposite of the meaning of Christmas.

It’s not that I would have minded buying gifts, but we couldn’t afford nice gifts, so in order to give people presents that would show we really cared, we needed to make them. So here I was trying to economize, and Glen was oblivious to that. He was willing to spend the money foolishly. I could see the enthusiasm drain out of Glen whenever there was something about Christmas that needed to be done.

Well, I decided if I went ahead and got Christmas started early he would get into the spirit of the thing and want to be involved himself. But that didn’t seem to work; the more I did, the more he was willing to let me do. The projects he was in charge of, like making the Christmas cards, would get postponed and in many cases not done at all. And when they were done I could see he resented the time it took. His heart just wasn’t in it, that’s all.

And it also frustrated me because I really didn’t want to be badgering him about what he was supposed to do, but it seemed that if I didn’t pressure him he wouldn’t get involved at all.

Glen feared that if he did not continue doing what he was doing, things would get even worse, and Becky feared the same. Both believe their accusations are restraining the undesirable behavior of the other and that therefore they are saving the situation. But in fact they are doing exactly the opposite! 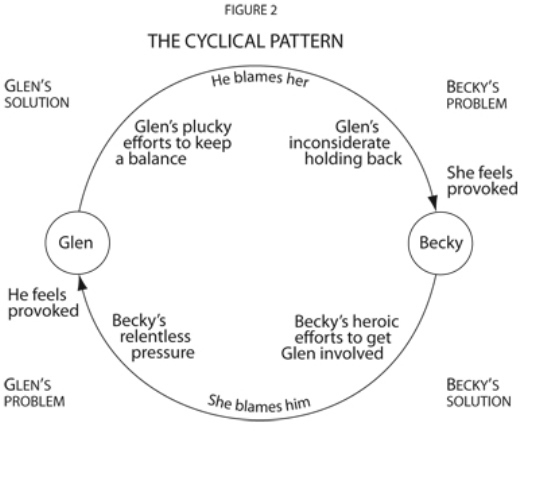 How could a circumstance be more curious or more potentially tragic? Here are two people in love with one another, speaking to each other without rancor, striving to do good as they see it, and yet, by every effort to make things better, actually making them worse.

In spite of the fact that nothing is more commonplace, we have no adequate word in our language for the cyclical pattern just described. What shall we call it? I prefer the term collusion. When used for this purpose, the word collusion is metaphorical. Individuals caught in this cycle push each other’s buttons so unerringly that they seem, like literal colluders, to be acting on a prearranged plan. When we live in this mode, we regard others as if they are objects existing primarily for our use.

We shall never get out of this predicament until we can chase the darkness from our eyes, see what’s right without distortion, and do the right without counterfeiting it. This requires a change of heart. But how can we change our hearts when we can’t even appreciate how much our hearts need changing?

We will be able to change ourselves in an indirect way if we can allow the other person to affect us differently; by that person becoming a You for us, instead of an It. The fundamental ingredient is an awakening of each individual to the others and a willing effort to respond without any personal agenda in exactly the way that seems most right, considerate, and helpful.

I want to close with an illustration of this liberating transformation from an It to a You. It’s Glen’s story of how his Christmas collusion with Becky came to an end.

► You'll also like: 10 Marriage Tips from the Prophets That Every Couple Needs

The Promise to Help That Changed Everything

Becky decided to make Christmas presents for certain neighborhood women in need. Two of those women were invalids, and a third served as an officer of an international charitable organization and had little time for herself. Becky planned to glue fine art prints to wood blocks with worn-looking edges and varnish them to look old. They thought a grouping of such prints would look handsome on a wall. They asked me to cut the blocks and scallop and burnish the edges.

About this time something happened that I cannot completely remember or reconstruct. Looking back, I can only suppose that Becky felt differently toward me from how she usually did as Christmas approached. Some partial softening in her must have begun to soften me. I say this because I felt different. I recall being very much in love and vowing to put my whole heart into anything Becky wanted me to do. So I prepared a dozen blocks as artfully as I could. This pleased Becky enormously, and her pleasure pleased me enormously.

“Why don’t we put all this stuff away and just sit around and enjoy being together?”

She went on. “It doesn’t matter that much if we don’t get all these gifts finished.

I looked right at her while trying to register the meaning of what she was saying. Then she added: “I’m worried about your work, Glen. Tomorrow you go to the office, and I’ll finish this up myself.”

I could hardly believe what I was hearing.

And that’s what we did that Christmas. We worked on some projects, but not frenetically. We relaxed and enjoyed the season. I accomplished quite a bit at work. We did not get everything done, which did not bother Becky a bit. She was sublimely happy.

Though I have often reflected upon those happy days in that holiday season, I cannot remember or reconstruct the steps that led Becky and me to our change of hearts. I recall only that one week I was chafing under her pressures to produce and “just knowing” her to be almost certifiably pathological, and the next finding her not only free of the fanaticism I had ascribed to her but on the contrary sensitive, solicitous, and spontaneous, and, as far as I was concerned, altogether free of fault.

How could I have been more mistaken? The truth was, she didn’t care about Christmas any more than I did! How could a human being change so completely? Preoccupied as I was with this transformation in Becky, I did not appreciate right away how much the change in her was linked with an equally dramatic change in me. I looked at her through new eyes, felt for her from a new heart.

There’s nothing mysterious about any of this: When others become real to us, we have a sense of how they feel and what will please them. And pleasing them is what we desire to do, because we have put away our resentment. That’s precisely what happened to both Glen and Becky, each responding with more sensitivity and care to the other’s growing sensitivity and care.

In this mutual consideration, good feeling escalates as surely as ill feeling escalates in collusion. Each person discovers the fathomless and refreshing reality of the other. This makes acting considerately toward that person delightful and in that sense easy—and whatever it costs in time or means doesn’t matter anymore.

► You'll also like: One Phrase That Transformed My Marriage 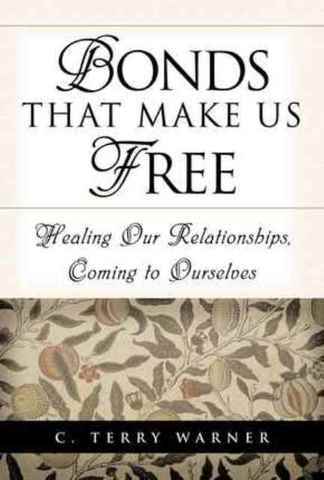 For more help in getting free from the trap of collusion, check out Bonds That Make Us Free, Healing Our Relationships, Coming to Ourselves by C. Terry Warner, available at Deseret Book stores and deseretbook.com.