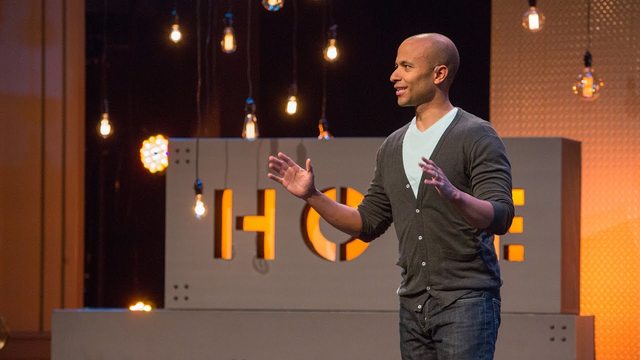 When you don’t know what to do and you don’t feel like you’re receiving answers or direction, just act. That’s what LDS actor and comedian Stephen Jones did, quite literally.

In a Hope Works presentation from the Mormon Channel, Jones explained the process of receiving promptings, guidance, and divine help for big decisions. Since everyone worries about the future and big decisions at some point, Jones shared personal experiences to inspire others to successfully navigate the often confusing world of decision making.

“About a year and a half ago, I knew exactly what I was going to do with my life—I had it all figured out,” Jones said in his presentation. “I was ready. I was all in. I was going to go at it . . . and I failed.”

After his college graduation, Jones got a job that offered him health insurance, which motivated him to stick with his desk job for a while. However, for Jones, sitting at a desk for eight hours a day started to feel like prison. Although he did comedy on the side, Jones ultimately realized he should be doing something else because of one question that came to his mind.

“A question that I’ve been able to use, that I can fall back on anytime . . . is, ‘Will this matter in a thousand years?’” Jones said.

While he technically meant act as an action word, Jones also decided to take acting gigs and quit his desk job. He realized he could use his gifts and talents to benefit others. He knew he had a gift for taking information and repackaging it to make people laugh. He also realized he could motivate or inspire others.

“I started running into a lot of religion teachers, and I was like, ‘Man, I want to teach.’ Teaching is like being on a stage—I love it. I can use my gift. . . . I can still use humor; I can still teach; I can still put an influence on some other people. So I was like, ‘Okay, I’m going to teach.’”

While Jones didn’t hear a clear voice from heaven guiding him to teach, he followed the feelings, thoughts, and promptings he received. If something didn’t feel right, he turned it down, and if something felt right, he made sacrifices to make it happen.

However, in all of his decision-making, Jones came back to that one important question: “Will this matter in a thousand years?”

After struggling to find a job as a religion teacher, Jones started teaching in Utah. During one class, a student raised his hand and asked, “Brother Jones, I know this is pretty basic, but how can I know Jesus is who He says that He is?”

Jones relates how he asked the student to reflect on how God has answered his prayers before, then go and ask God his question. The student came back after the weekend and reported, “I got down on my knees and prayed to God, and I asked Him about His Son. He answered me.”

“That’s going to matter in a thousand years,” Jones said.

While Jones doesn’t expect everyone to become a teacher, he encourages everyone to figure out how to use their gifts and talents to make a difference. Forget about “petty” stuff, he said, and focus on what will matter in a thousand years—look at your decisions with an eternal perspective.

If you excessively worry about the decisions you have to make or stress about what the future holds for you, Jones encourages you to ask yourself the following two questions:

1. What are you worrying about right now that won’t matter in a thousand years?

2. What are you going to do that’s going to matter in a thousand years?

With divine help, your actions will set you on the path that you are meant to follow. While you won’t necessarily receive a clear voice from heaven for every decision you make, you can know that God’s hand is directing you and guiding you to make a difference where you can.