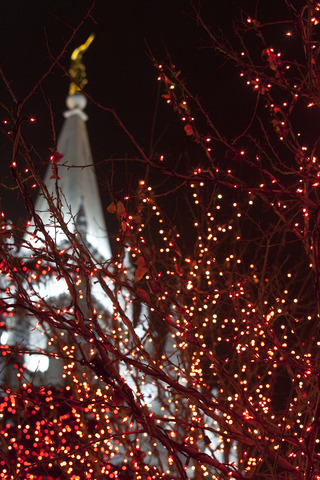 The South Gateway to Temple Square becomes a curtain of light with the welcoming words, "Good Will Toward Men" on December 18, 1965. Photo from Deseret News.

It’s hard to imagine that the Temple Square lights almost didn’t happen. In the fall of 1965, when Deseret News publisher E. Earl Hawkes proposed a Christmas display to President David O. McKay, the head gardener at Temple Square was worried that heat from the lights would harm the trees. But after much debate, President McKay decided to go ahead with the project (some say at the urging of his wife, who thought the Church should do more to share their beliefs at Christmas) and gave the task to arborist J. Leland Behunin—though Behunin had never lit a tree in his life.

During the first few years of hanging the lights, Behunin had few tools and no ladders. But the effort made it all worth it when 15,000 people attended the first Lighting of Temple Square ceremony on December 9, 1965.

Today, the lights are a year-round project. Church employees and volunteers begin putting the lights in the trees in August, the lights are turned on from the Friday after Thanksgiving until New Year’s, and it takes another two and a half months to take them down. It’s certainly a lot of work, because just one tree can have up to 75,000 lights. And in the meantime, there’s a lot of planning that has to happen.

Lights on the trees aren’t the only things bringing the message of Christ to Temple Square, though. Luminaries line the walkways and fountains, proclaiming messages of Christ and featuring scenes from Christ’s life. Several different nativities—including one with music and narration, a floating nativity on the reflecting pond, and several small nativities from different parts of the world—also portray the global message of Christ. Concerts convey the message on the backs of musical notes. And people carry it in their hearts as they wander the grounds.

“It’s really nice to hear and see families come together and walk the Square,” said Eldon Cannon, group manager of grounds services at Temple Square. “It gives them the opportunity to reflect on what the holiday season is really about.”