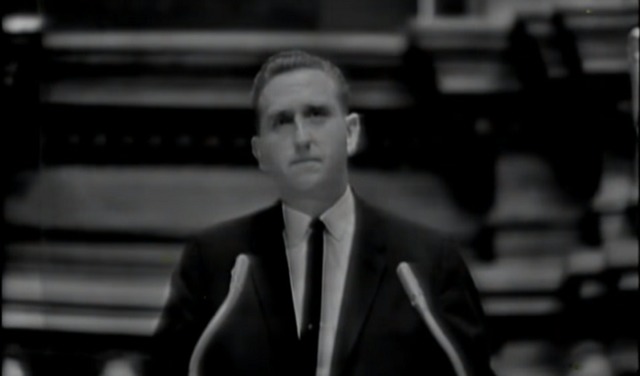 When President Thomas S. Monson stood at the pulpit to address the world for the 186th Semiannual General Conference on Sunday morning, he delivered a simple but profound message entitled "The Perfect Path to Happiness."

While many members have noticed that his conference messages have recently decreased in length, the profound truths he shares are no less powerful.

The same is true for President Monson's first-ever conference talk, which he delivered on October 4, 1963, after he was called to the Quorum of the Twelve Apostles. Leaving the comfortable rows of the audience and joining the Brethren on the stand for the first time, Thomas S. Monson delivered a short yet profound testimony in just over six minutes.

President Monson's most recent conference address echoes many of the same principles that he shared in his first ever conference talk, which was entitled "I Stand at the Door and Knock."

"Some years ago," he said in 1963, "I stood at a pulpit and noticed a little sign that only the speaker could see—and the words on that sign were these: 'Who stands at this pulpit, let him be humble.' How I pray to my Heavenly Father that I might never forget the lesson I learned that day."

In the Sunday morning session of the October 2016 general conference, President Monson stood humbly at the pulpit to testify: "From the depths of my soul and in all humility, I testify of the great gift which is our Father's plan for us. It is the one perfect path to peace and happiness both here and in the world to come."

Not even a year after he was called to the Quorum of the Twelve Apostles, President Monson attended the 1964 World's Fair, which he shared about in this fall's conference. In New York City for an assignment, Elder Monson sat next to a young man who was not a member of the Church for a showing of the Church film, Man's Search for Happiness. When he asked what the young man thought of the film, the young man replied, "This is the truth!"

In Elder Monson's first testimony at general conference in 1963, he also knew and declared the truth. "I know that God lives, my brothers and sisters—there's no question in my mind," he said. "I know that this is His work, and I know that the sweetest experience that we can feel in all this life is to feel His promptings as He directs us in the furtherance of His work."

In his 1963 conference address, Elder Monson expressed gratitude for his family, his colleagues, and those who paved the way before him. He mentioned the missionaries who taught his family in Sweden, Scotland, and England, and made it possible for his ancestors and family to know the truth. He also addressed the missionaries in his recent conference address—those who go and share God's plan for our happiness throughout the world.

"We are blessed to have the truth," President Monson said in the Sunday morning session of the 2016 general conference. "We have a mandate to share the truth. Let us live the truth, that we might merit all that the Father has for us. He does nothing save it be for our benefit. He has told us, 'This is my work and my glory—to bring to pass the immortality and eternal life of man.'"

He also shared a story in his 1963 address about a French Canadian woman who spoke with him as he and his family were leaving Canada at the end of his mission presidency. She said, "President Monson, I may never see the prophet. I may never hear the prophet. But . . . now that I am a member of this Church, I can obey a prophet."

Little did that woman know she was speaking and hearing from a man who would become the prophet. He pledged in his first conference address to follow the prophet and obey and serve the Brethren.

"I pledge my life and all that I may have. I will strive to the utmost of my ability to be what you would want me to be," he said. "I'm grateful for the words of Jesus Christ, our Savior, when he said, 'I stand at the door and knock. If any man hear my voice and open the door, I will come in to him.' I earnestly pray, my brothers and sisters, that my life might merit this promise from our Savior."

► You'll also like: A Message from President Monson Every Mormon Needs to Hear—Now

We can also do as he pledged to do, following his most recent counsel to follow the Savior and continue on the gospel path.

"Essential to the plan is our Savior, Jesus Christ. Without His atoning sacrifice, all would be lost. It is not enough, however, merely to believe in Him and His mission. We need to work and learn, search and pray, repent and improve. We need to know God's laws and live them. We need to receive His saving ordinances. Only by so doing will we obtain true, eternal happiness."

Watch his first general conference talk, given on October 4, 1963.

Read, listen, or watch his most recent general conference talk from October 2, 2016, on lds.org.