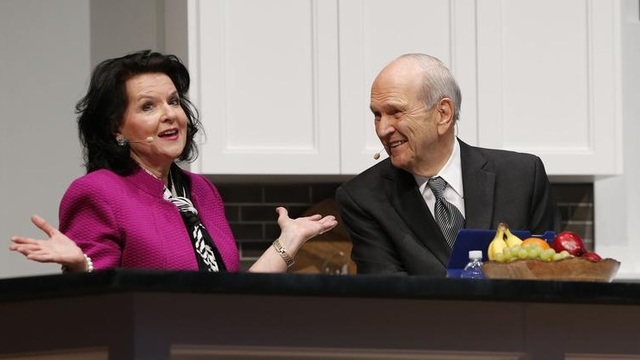 The following are excerpts from President Russell M. Nelson's Accomplishing the Impossible and Perfection Pending.

Many years ago, I was teaching a missionary discussion to a woman from Great Britain. I was teaching about the Lord Jesus Christ and how He had restored His gospel through the Prophet Joseph Smith. She really liked the teachings of the gospel, but she had a hard time accepting the Prophet’s First Vision. She said she could believe in the Restoration more sincerely if God the Father and His Son Jesus Christ had appeared to the Archbishop of Canterbury!

Actually, the fact that the Father and the Son appeared to an untitled youth is one of the most remarkable aspects of the Restoration. Joseph Smith did not have to “unlearn” anything. He was tutored personally by Them. . . . But, by worldly standards, Joseph was most unlikely. And his task to be the Prophet of this last dispensation seemed totally impossible. This example demonstrates a principle that is often true of how the Lord works: He uses the unlikely to accomplish the impossible!

Those Who Achieved the Impossible

This pattern is one the Lord has used repeatedly throughout history. For instance, you know the story of David who slew Goliath with a stone and a sling. That was another example of how the Lord uses the unlikely to accomplish the impossible.

You may remember the account of Gideon, as recorded in the book of Judges. In his capacity as a servant of the Lord, Gideon was preparing to lead his forces against the Midianite enemies when “the Lord said unto Gideon, The people that are with thee are too many, . . . lest Israel vaunt themselves . . . saying, Mine own hand hath saved me.”

So the Lord told Gideon to excuse all who were afraid. That trimmed the number from 22,000 down to 10,000. Then the Lord said unto Gideon, “The people are yet too many.” So He ordered a drink test. They went down to the water. Some bowed down upon their knees to drink. Others cupped their hands to their mouths to drink.

The Lord said unto Gideon, “By the three hundred men that lapped will I save you, and deliver the Midianites into thine hand.”1

The Lord delivered the victory to Gideon and his men. They were outnumbered about 500 to 1.4 Here again we see the pattern: the Lord uses the unlikely to accomplish the impossible. . . .

In the year 1830 . . . the restored Church of Jesus Christ was officially organized with six members. The location was in a rural part of New York state. With this little handful of people, the Lord’s work was begun. Think of the enormity of their assignment! It included the following:

If any tasks ever deserved the label “impossible,” these massive assignments all qualified! But the early Saints knew this biblical truth: “With men this is impossible; but with God all things are possible.”2 . . .

► You'll also like: 17 Photos of President Nelson That Will Make You Love Our New Prophet Even More

As a Latter-day Saint, you too can accomplish the impossible. You can help shape the destiny of the entire human family! You and your fellow Saints will be scattered like seeds in the wind to build up the Church in all parts of the world. As you know and apply the teachings of the Lord in your life and in your work, you can change the world. You will become a precious part of His perennial pattern: the Lord uses the unlikely to accomplish the impossible!

3 Requirements for Achieving the Impossible

I feel impressed to counsel those engaged in personal challenges to do right. In particular, my heart reaches out to those who feel discouraged by the magnitude of their struggle. Many shoulder heavy burdens of righteous responsibility which, on occasion, seem so difficult to bear. I have heard those challenges termed impossible.

How is it possible to achieve the "impossible"? Learn and obey the teachings of God. From the holy scriptures, heaven-sent lift will be found for heaven-sent duties. To so achieve, at least three basic scriptural themes loom repeatedly as requirements.

The foremost requisite is faith. It is the first principle of the gospel. In his epistle to the Hebrews, Paul so taught. He concluded that by faith the great deeds of Noah, Abraham, Sarah, Isaac, Jacob, Joseph, Moses, Joshua, and others were accomplished.

Prophets on the American hemisphere similarly taught the fundamental importance of faith. Moroni said it included things "hoped for and not seen" and then warned his skeptics, "Dispute not because ye see not, for ye receive no witness until after the trial of your faith." Then he spoke of leaders whose faith preceded their miraculous deeds, including Alma, Amulek, Nephi, Lehi, Ammon, the brother of Jared, and the three who were promised that they should not taste of death.

The Lord personally taught this truth to His disciples: "If ye have faith," He said, "nothing shall be impossible unto you."

The second requisite I have classified as focus. . . .The Lord said, "Look unto me in every thought." That special vision will also help clarify your wishes when they may be a bit fuzzy and out of focus with God's hopes for your divine destiny. Indeed, the precise challenge you regard now as "impossible" may be the very refinement you need, in His eye.

A third theme in the scriptures requisite for significant accomplishment is difficult to summarize in one word, so I shall link two to describe it—strength and courage. Repeatedly, scriptures yoke these attributes of character together, especially when difficult challenges are to be conquered.

You who may be momentarily disheartened, remember, life is not meant to be easy. Trials must be borne and grief endured along the way. As you remember that "with God nothing shall be impossible," know that He is your Father. You are a son or daughter created in His image, entitled through your worthiness to receive revelation to help with your righteous endeavors. You may take upon you the holy name of the Lord. You can qualify to speak in the sacred name of God. It matters not that giants of tribulation torment you. Your prayerful access to help is just as real as when David battled his Goliath.

Foster your faith. Fuse your focus with an eye single to the glory of God. "Be strong and courageous," and you will be given power and protection from on high. "For I will go before your face," the Lord declared. "I will be on your right hand and on your left, and my Spirit shall be in your hearts, and mine angels round about you, to bear you up."

The great latter-day work of which we are a part shall be accomplished. Prophecies of the ages shall be fulfilled. "For with God all things are possible." 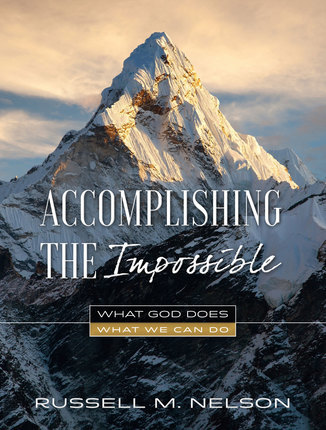 Read more inspiring insights from our new prophet in Accomplishing the Impossible.

We too can become a part of this grand pattern as we strive to learn and to do His will. This insightful book explores some of the means God gives us—such as angelic help, prayer, and gifts of the Spirit—to help us accomplish the impossible. It then shows what we can do to take our place in fulfilling the destiny He has planned for us. As we become partners with the Lord, impossible things really can become a reality!

1. Judges 7:12 states, “The Midianites and the Amalekites and all the children of the east lay along in the valley like grasshoppers for multitude; and their camels were without number, as the sand by the sea side for multitude.”

Gideon pursued the Midianites to Karkor, where they numbered “about fifteen thousand men, all that were left of all the hosts of the children of the east: for there fell an hundred and twenty thousand men that drew sword” (Judges 8:10). This would seem to imply that this was the number that Gideon pursued. This idea is confirmed in Harper’s Bible Dictionary (1985), 347.