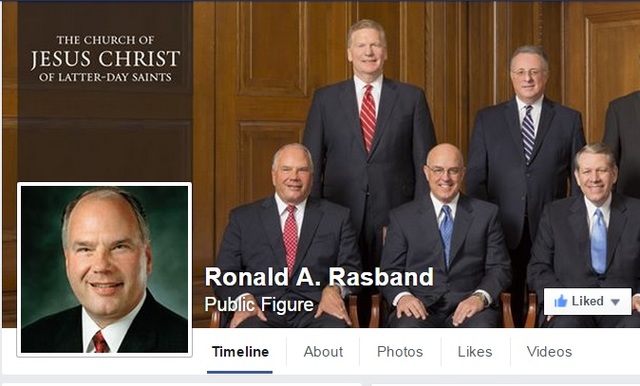 President of the Seventy Opens Facebook Dialogue on Gay Rights, Gets Moving Responses

MR says: For the first time, a General Authority asked students to send their questions, concerns, and experiences regarding difficult issues like gay rights to his personal Facebook page. The response was overwhelming!

In a BYU devotional on religious freedom and fairness for all held on Tuesday, September 15, Elder Ronald A. Rasband, senior president in the Presidency of the Seventy, made a request never before given by a General Authority. He asked students to comment on his Facebook page with their concerns and questions on issues like gay rights, turning his Facebook page into a discussion board for these sensitive issues.

"I stand with the leaders of our Lord's Church when I say that we need your generation's natural understanding of compassion, respect, and fairness," he told the students. "We need your optimism and your determination to work through these complex social issues."

Within days, his post has garnered well over 100 comments.

Here are some of the moving responses:

This was such an amazing message. As a Homosexual Member of the Church, it really spoke to me, and I loved the candor with which Elder Ronald A. Rasband could present his stance. Having grown up in the Church my whole life, I have been taught all of the doctrine and morals of the Church, and I wholeheartedly support them. But at the same time, I am very sympathetic to the LGBT community, being Homosexual as well. When Elder Rasband spoke about loving unconditionally and expressing #Fairness4all, I was brought to think of my own situation. It seems as if I am almost bombarded from both sides of the argument with these attacks on both Homosexuality and Religion. As a devout member of the church, I firmly believe that sexual relations must be preserved between a man and a woman, lawfully and legally married, but as a homosexual, I find it very difficult to personally live this commandment, and experience prejudice from both friends within the church simply for struggling with what I do, as well as from the Homosexual Community for believing as I do. But as we learned today in the Devotional, it IS possible to love and extend friendship without forfeiting your own beliefs. I know firsthand how members with faith can be thought as uncaring, judgmental, or discriminating, and even more so how hard it can be to be "gay" and feel the prejudices from those around you who should love and support you. But I know that I can live the law of God and obey his commandments. I will not forfeit my belief and my faith simply because it would be easier and more politically correct for me to act "in my own natural way". I will uphold the commandment of marriage between a man and a woman, and extend love and understanding to those who may be in my same position. The Church does not hate "gays", and it is possible for "gays" to live in the Church, full of joy, acceptance, and love. Thank you Elder Rasband!

I currently serve in a BYU YSA ward bishopric. This past summer, one of our members came out as bi-sexual on social media and YouTube. After counseling with the bishopric, the bishop stated that this sister is a worthy sister that holds a temple recommend and uses it. He encouraged us to reach out to this sister in love, and to encourage others in the ward to reach out to her as well. I was able to follow up with her multiple times, and thankfully she felt strongly supported by her peers--peers who knew the principle of#fairness4all . I am grateful to have been through this experience that taught me this principle as well. As a future LDS Army chaplain, I look forward to upholding religious freedom as granted by the US constitution. Great meeting you today, thank you for your timely and sincere remarks!

Just wanted to share a story about my experiences this year in concerns with Fairness To All.When I was visiting a city near Portland Oregon, I was surrounded by many friends whom were not of our faith, it was difficult to see their perspective on the very sensitive issue of Gay Rights. Just before my trip, I noticed the broadcast about the first presidency discussing legalizing gay marriage and gay rights. To me it was hard to hear our apostles talking about it since I had been so adamant about my perspective of gay rights. But knowing that their perspective was clear and well thought out, I knew I could trust their opinion and council on the very topic that I was having trouble with.

One night while on my trip, I was caught up in a conversation about gay rights with a friend of mine whom I respected and admired for his values and standards, though he was not a member of the church. we talked for awhile and as we did he asked me what my opinion was on the subject of gay rights. I then remembered that very video about gay rights, I distinctly remember Elder Christofferson's voice rejoicing in equality. I then felt the spirit enter my soul and was able to share the views of the church with him and after explaining about the video, felt the confirmation of the spirit, that what I had said was true and was a witness to me that I had been an example to him and how the church views this topic. What an amazing experience!

Elder Rasband, I just wanted to take a few minutes to share my experiences, per your request. I have many friend who are gay. Some are members of the Church, some are no longer members, and some have never been members. For those who are not, they are often shocked when they realize I am a member of the Church. While my initial response is usually something along the lines of, "wow, do I seem like that bad of a person?", they almost always respond, "no, it's the exact opposite; i've rarely been treated so kindly by a member of your faith, so I never would have suspected you were Mormon." While I wish I could say I was thrilled by the complement, my heart is usually too busy breaking at the thought that such a statement could be true. . . . In your talk, you pretty much hit that nail on the head. It is in fact the one key characteristic about myself that has allowed me to maintain friendships with so many who have left the Church or who do not share my views. In the scriptures, we read the story of Ammon, who goes to live amongst the Lamonites. Having just been converted and knowing the importance of his message, he could have gone before King Lamoni with "guns blazing" and condemned his entire nation to hell for their sins. But he did not. He went to them and showed them love. He showed them compassion. And most importantly, he showed them respect. He knew that the Lord alone could open the door for these people and that he was merely a vessel.

First of all, thank you for the opportunity to share a comment here. I have been inspired by reading some of these comments and by your invitation to leave comments here. One of my favorite things about the Church of Jesus Christ is that there is an open mic -- there is a space for us to speak up. Thank you, Elder Rasband, for giving us that chance once again.

During his talk, Elder Rasband listed three ways members of the Church can protect their religious freedom even while they stand for the rights of those with differing values: 1) see others through a lens of fairness, 2) treat them with respect and kindness, and 3) expect the same treatment in return. There is much we can learn from his inspired insights as well as from those sharing their experiences. To read more comments, see Elder Rasband's post below.

Join me today at 11:05 a.m. MDT for the #BYUdevo. We’re talking about religious freedom and #fairness4all. Afterwards, leave a comment here and tell me about your experiences.byutv.org/watch/livetv