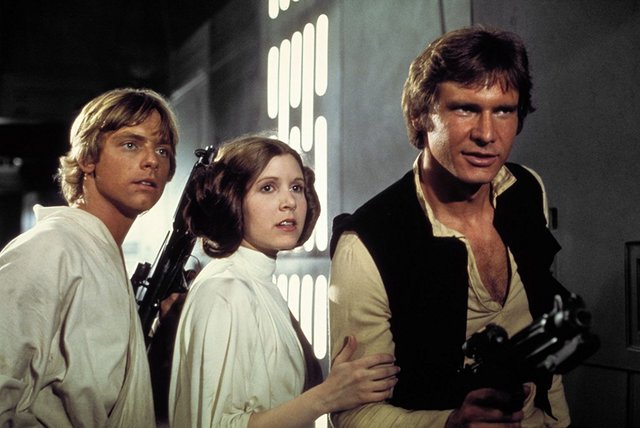 Mormons are obsessed with Star Wars. In fact, that fact is so apparent that The Washingon Post wrote an entire feature on the topic back in 2015. And who wouldn't want to be associated with an epic franchise that transports viewers to a vivid, exciting, and intricate galaxy far, far away?

But where does this obsession stem from?

Here are a few of my own hypotheses.

Parallels between the Church and Star Wars galaxy abound.

A council of 12 Jedi helps guide others as they learn more about their existence and the purpose of life in temples. Does that sound familiar? Oh, and did I mention they are also guided by a higher power that helps direct them as they fulfill their destinies?

Say what you will, but Star Wars provides an amazing allegory for the Spirit, Church, priesthood, and temples.

More than a few national news outlets have noted that the world of fantasy and sci-fi is often dominated by LDS authors and fans. Don't believe me? Battle Star Galactica, Ender's Game, Galaxy Quest, Fablehaven, Cosmere, Twilight—any of those sound familiar? All created by Mormons.

We understand the battle between the dark and light better than anyone, even Luke.

Yes, other religions talk about the battle between heaven and hell, but they don't have the Pearl of Great Price or modern revelation to help illuminate this battle that originated in the pre-existence that still continues today. Does any story illustrate this tangible, real battle between light and dark better than the First Vision? I don't think so. "I had scarcely done so [began to pray], when immediately I was seized upon by some power which entirely overcame me, and had such an astonishing influence over me as to bind my tongue so that I could not speak. Thick darkness gathered around me, and it seemed to me for a time as if I were doomed to sudden destruction. . . . at the very moment when I was ready to sink into despair and abandon myself to destruction—not to an imaginary ruin, but to the power of some actual being from the unseen world, who had such marvelous power as I had never before felt in any being—just at this moment of great alarm, I saw a pillar of light exactly over my head, above the brightness of the sun, which descended gradually until it fell upon me" (Joseph Smith History 1: 15-16).

A fellow Mormon helped shape Star Wars as we know it.

No wonder there are so many parallels between Star Wars and Mormonism—a Latter-day Saint helped create it. Film legend Gary Kurtz helped produce the first Star Wars movies, and his influence may explain where so many of the gospel parallels in the movies stem from.

We like to see good triumph, despite growing evil.

Many Mormons strive to follow President Gordon B. Hinckley's counsel and remain optimists at heart. "We have every reason to be optimistic in this world. Tragedy is around, yes. Problems everywhere, yes. . . . You can’t, you don’t, build out of pessimism or cynicism. You look with optimism, work with faith, and things happen" (from Ensign, June 1995, 4).

Mormons understand who will win the final battle in the end—so when the world seems to grow dark and ugly, we can still see hope and find a reason to fight for the right.

For Mormons, cosplay is much more than a reason to get dressed up outside of Halloween. Instead, it is a way to participate in the stories we love—stories like Star Wars that tie to the gospel and promote many of our same values, with a few fun characters and plot twists to add some entertainment.

We know that one person can change the balance of the world.

Our Church history is full of God's chosen servants who have changed the world, even at great personal cost. There was Moses who gave up power, glory, and position to save an enslaved nation. There was Joseph Smith who stood firmly by his testimony and established the Church, even at the cost of his life. And there was our Savior, Jesus Christ, who condescended to come to earth and give and suffer everything to save humanity. No wonder stories like Luke's and Rey's resonated with us. They remind us of our own past and of the gospel of salvation.