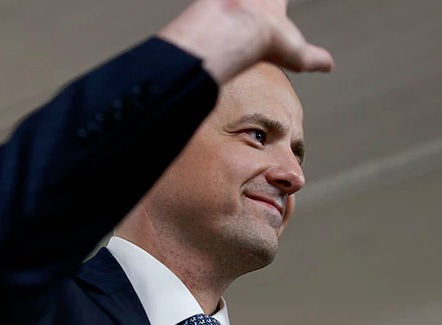 Romper: Has Evan McMullin Always Been Mormon? The Candidate Seems Devoted to His Faith

Learn more about how Evan McMullin stands up for his Mormon faith and what would need to happen for McMullin to actually win the presidency.

Republicans who can't stomach Donald Trump, hate Hillary Clinton, and are increasingly worried about Libertarian candidate Gary Johnson's "Aleppo moments" are beginning to pay attention to a man who seems like their final hope, Evan McMullin.

The former CIA agent is running as an Independent candidate, and he may actually have a chance of winning Utah, in part because of his Mormon background. But has Evan McMullin always been Mormon? He certainly has, and consequently has lived a very different life from the Republican nominee, whose relationship to his Christian faith has been a bit more complicated.

McMullin is about as Mormon as a Mormon can be. . . . Even his reasons for running for the presidency seem to be informed by his Mormon faith.

Read the rest of this story at romper.com