The laying of the Salt Lake Temple capstone was a seminal event in the history of The Church of Jesus Christ of Latter-day Saints. One newspaper account describes “the crush, the enthusiasm, and the widespread interest” occurring on Temple Square on April 6, 1892.

A crowd of 30,000 people gathered around the temple, with another 10,000 looking on from nearby streets, building roofs and trees. They were there to see the finishing piece placed atop this sacred worship space that had been under construction for 39 years. Even the early spring weather was wonderful. “Nothing more peaceful and beautiful could have been desired or prayed for than the day which was to see the consummation of so momentous an event,” the article says.

A journalist atop the temple to witness the laying of the capstone, including the deposit of a time capsule within it containing books, photos, letters, paper notes, medallions and coins (one of his own included) mused “on when, how, and under whose eyes it would be exhumed in some untold age in the future.”

Fast-forward 128 years to May 18, 2020, a day perhaps equal in balminess but not in fanfare. No large crowds were present. A few dozen construction workers removed that same 3,800-pound circular granite capstone, along with its time capsule contents and the angel Moroni statue that has stood on top of it. This was done for preservation and refurbishing during the temple’s seismic upgrade that began in January 2020.

“It makes me laugh a little bit [to think about that journalist and the large cultural event surrounding the laying of the capstone],” said Emily Utt, historic sites curator with the Church History Department. “Our opening [of the capstone] has been a few people on a loading dock with very small chisels. I don’t know if [the people of 1892] could have imagined that kind of interaction. They had such fanfare. Our opening has been much quieter.”

Indeed, two days after the capstone’s removal from the temple, the First Presidency joined a small group in the loading dock of the Church History Library to witness the initial opening of the time capsule. Since that time, conservation experts and stone masons have carefully cut through the capstone’s thick granite and cement — as Utt said, with small chisels — to retrieve the remainder of the treasures that have sat in several cavities within for nearly 13 decades.

“We did not expect to find much because we knew that the contents of the capstone had not been insulated from the weather during the 128 years that had elapsed," said President Russell M. Nelson. "But we wanted to be there anyway, just to be close and to pay tribute to the leaders and courageous pioneer craftsman who against all odds built this magnificent temple.” 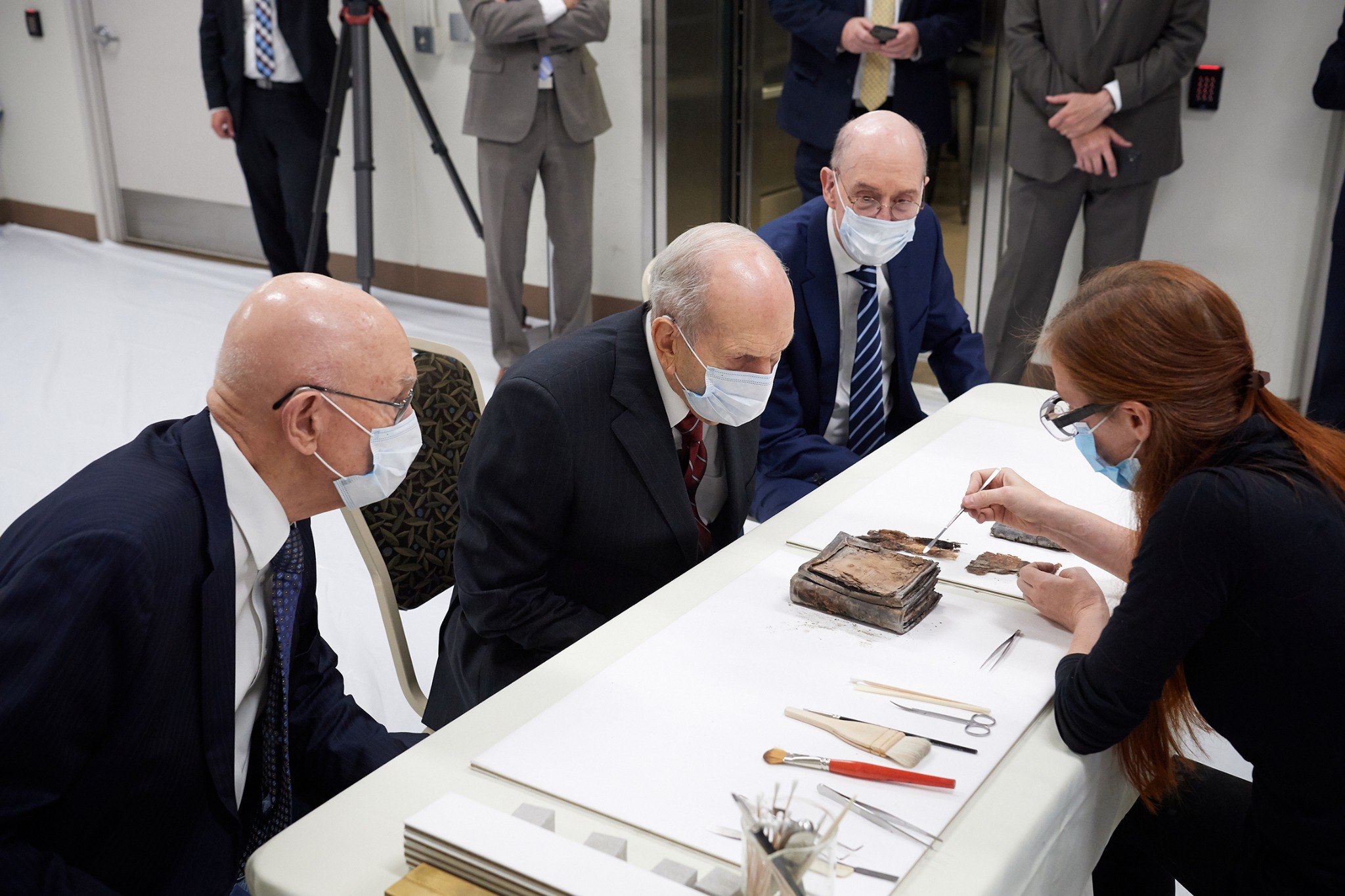 Emiline Twitchell, a conservator at the Church History Library, shows contents from the capstone of the Salt Lake Temple to the First Presidency on May 20, 2020. ©2020 by Intellectual Reserve, Inc.

The Time Capsule Contents and Their Condition

Newspaper records from the time detail most of the items placed inside. Materials were in the north, east, south, and west portions of the capstone.

Some materials, such as a copper plate, coins and medallions are in good condition. The gold-leafed copper plate, discovered in the north cavity, is inscribed with the names of the Church General Authorities present for the laying of the temple cornerstone on April 6, 1853, as well as the names of Church General Authorities present at the laying of the capstone on the same date in 1892. Some 400 coins have been found inside the concrete — mostly nickels and dimes, some pennies, a few quarters, and six-pence, three-pence, half-dime and three-cent pieces. Some coins remain unexcavated in the concrete.

The Salt Lake Herald Republican report says that just minutes before the signal came to place the capstone, “every man on the platform eagerly thrust out a dime or a nickle [sic] or a quarter of a dollar” onto the bed of cement applied atop the bottom half of the stone. 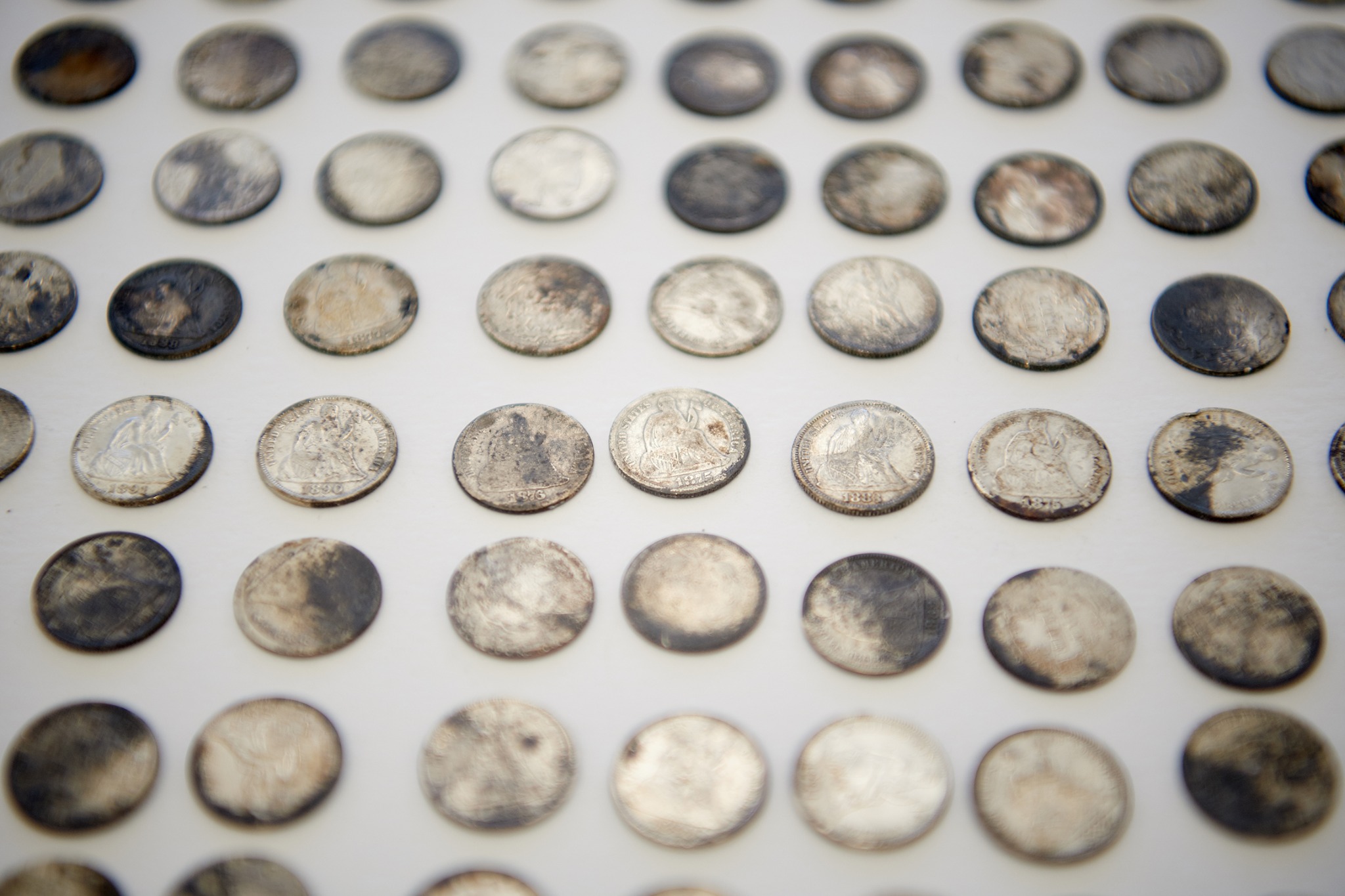 These coins were deposited in the capstone of the Salt Lake Temple on April 6, 1892. Some 400 coins—mostly nickels and dimes, some pennies, a few quarters—have been found inside the concrete. ©2020 by Intellectual Reserve, Inc.

“One of the really delightful things was finding coins that had been engraved,” said Emiline Twitchell, a conservator at the Church History Library. “We have some coins that had been ground down on one side so that a person’s name could be engraved. We have dimes, we have one penny and we have a couple of nickels that were engraved. Some of them appear to have been done professionally and some of them [look] like someone just scratched their name onto a nickel.”

The books, photos, letters and notes, on the other hand, suffered significant water damage because they were surrounded by cement.

“Concrete will sweat and leach and get hot as it’s curing,” Twitchell said. “And the books essentially were sponges to all of this process that the cement is doing. And so they just leached in all of that moisture and sat for decades and decades and decades.”

In the east and south cavities, the conservation team found 12 books (five in the east, seven in the south), seven of which have been positively identified: 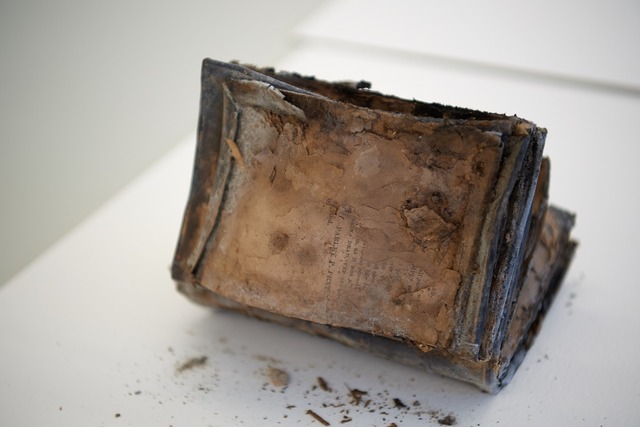 A copy of Parley P. Pratt’s "A Voice of Warning," fused with a copy of the Book of Mormon, were found inside the capstone of the Salt Lake Temple. ©2020 by Intellectual Reserve, Inc.

Pratt was part of the Church’s first Quorum of the Twelve Apostles, established in 1835. People such as Pratt and Orson Spencer were important thinkers and writers in the early Church. The only other books specifically mentioned in the 1892 report are a hymn book and a compendium.

The seven photos in the west cavity are in a similarly decayed state due to the cement. Newspapers reported that the capstone contained photographs of Joseph and Hyrum Smith, Brigham Young, John Taylor, Wilford Woodruff, George Q. Cannon, Joseph F. Smith and the Salt Lake Temple. Because there is not a known photograph of Joseph Smith, historians were excited at the possibility of discovering one.

They concluded instead that the photos are likely cabinet cards, a popular photography type of photography in the late 19th century. The photos are laminated together because of the moisture from the concrete that was trapped within the capstone. Thus, no photographic image remains. The preservation team guesses that the cabinet cards came from C.R. Savage, a well-known photographer in Salt Lake City at that time. 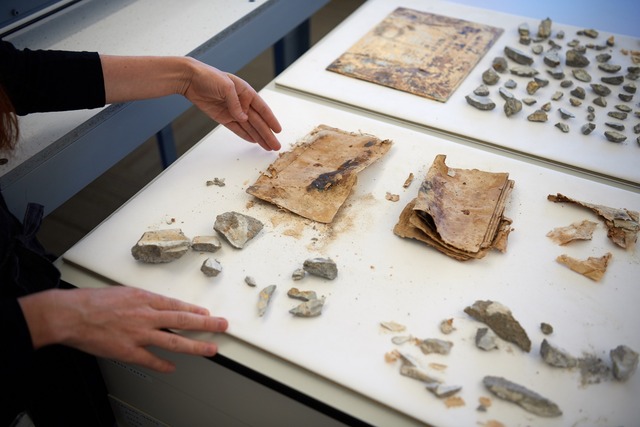 The items near the left hand in this shot are photos found in the capstone of the Salt Lake Temple. Newspapers in 1892 reported that the capstone contained photographs of Joseph and Hyrum Smith, Brigham Young, John Taylor, Wilford Woodruff, George Q. Cannon, Joseph F. Smith and the Salt Lake Temple. The photos are laminated together because of the moisture from the concrete that was trapped within the capstone. Thus, no photographic image remains. ©2020 by Intellectual Reserve, Inc.

“As we got to that last [cavity in the capstone] and realized that it was likely cabinet cards and realized that they were probably wet, the anticipation changes because the odds of finding any material that is even readable has now gone way down,” Utt said. “So probably in that stack of cabinet cards is some likeness of Joseph Smith, but it’s not going to be the never-before-seen photograph of him. It’s likely of a copy of another image of Joseph that we’ve seen.”

Plans for the Time Capsule Materials

The preservation team still has work to do. In addition to positively identifying each piece of content within this time capsule, they are considering the proper level of preservation for each item. For example, do they risk damaging the copper plate by cleaning it and restoring it to the way it looked in 1892? Or do they leave it as is to maintain its connection to being encased in the capstone?

“We’re having those same conversations about everything else that came out of this ball,” Utt said.

Church History Department staff are cataloging each of the items into its vast collection of historical material. The contents may also be put on public display, though that is far from certain because of their fragility.

Although many of the materials have deteriorated in the decades since 1892, something ultimate remains vibrant. Perhaps the journalist who tossed his nickel into the time capsule and pondered on an “untold age in the future” when the capstone would be opened would be pleased to know that the human thread connecting his day with 2020 is strong and sure.

► You may also like: See photos and watch a time-lapse video of recent Salt Lake Temple renovation progress

Lead image: President Russell M. Nelson looks inside the capstone of the Salt Lake Temple on the loading dock of the Church History Library on May 20, 2020. ©2020 by Intellectual Reserve, Inc.