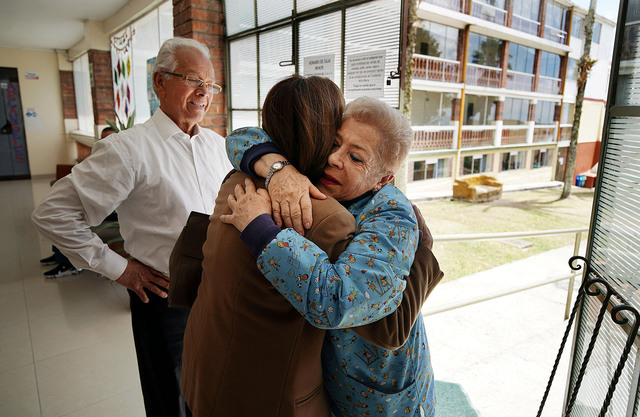 Most children living in Bogotá’s sewers do not want to leave. They grow accustomed to the waist-deep feces, the stench, the darkness, the water and the rats. As frightening and dangerous as the sewers are, the children feel safe there.

“We take bread and hot chocolate into the sewers so the children will sit down and listen to us while we talk them into leaving with us,” said Alexander Quinche, the lead psychologist for Fundación Niños de los Andes.

The charity began 30 years ago in response to death squads that killed to socially cleanse Bogotá, which has a population of 7.1 million people, of undesirable homeless people and drug addicts. Today, alcoholism, drug addiction, crime and other factors that fuel homelessness and abject poverty for 62,000 people in this sprawling mountain capital city drive some into the stinking, stomach-turning sewers where the children must avoid older impoverished homeless people who prey on them, according to statistics from DANE, a government agency.

The foundation’s website promises, “We transform children. We restore lives. We change the world.”

Changing the world 800 children at a time requires beds, mattresses, sheets and more. Many of those critical supplies arrived recently when a Bogotá couple now in their eighth year as humanitarian missionaries systematically contacted the city’s charities asking what they needed. Elder Hernán Ostos and Sister Beatriz Alcázar de Ostos forwarded the request for beds to the headquarters of the South America Northwest Area of The Church of Jesus Christ of Latter-day Saints in Lima, Peru.

“What we receive from the federal government is totally insufficient, so we depend a lot on donations such as the church’s,” Quinche said. “Otherwise, we could not provide proper care or save and re-socialize as many children.”

The missionary couple arranged the donations. Teens from the church’s Young Men and Women organizations in congregations in the Bogotá area took away the foundation’s old, ramshackle bunkbeds and then carried in and put together the ones donated by the church. They also brought blankets, towels, hygiene kits, school supplies and furniture, including desks.