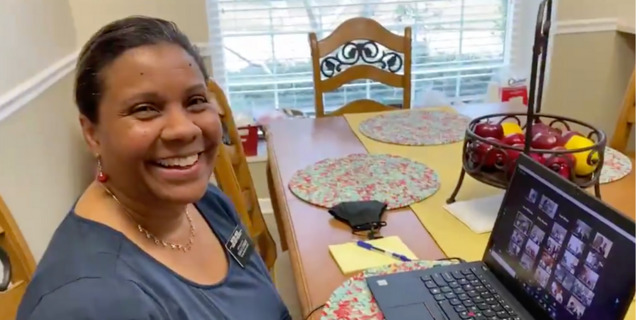 Sister Amos was called as a mission leader before her NASA project landed on Mars. Here’s how 200 missionaries joined her to watch the landing

July 2020 was a monumental month for Sister Michelle Wright Amos. At the start of the month, she began her service of presiding over the Louisiana Baton Rouge Mission with her husband, President John D. Amos—leaving behind a career with NASA where she had worked on the Mars Perseverance rover for almost a year. And at the end of the month, that rover launched into space.

When the rover landed on Mars about seven months later on Thursday, February 18, 2021, more than 200 missionaries joined Sister Amos to watch through a Zoom call. When the touchdown was confirmed, her missionaries celebrated alongside her, as reported by Deseret News.

Before being called on a mission, Sister Michelle Amos had a 30-year career at NASA. She worked on the Mars 2020 rover as a system engineer. Today she watched the Mars rover landing via Zoom with the 200 serving in Louisiana Baton Rouge Mission. #Mars2020 #MarsLanding pic.twitter.com/rPUFLN3UKv— Trent Toone (@tbtoone) February 18, 2021

After the landing, the missionaries and the Amoses shared their feelings about the landing, and the conversation went in a spiritual direction. They shared thoughts about the creation, the Savior, and the link between science and faith. One young missionary said this was one of the best moments of his mission.

► You may also like: This mission leader was a part of the NASA team putting a rover on Mars, but she missed its launch to serve the Lord

Sister Amos said, “I never expected it would have this impact, but God knew. I feel blessed to be an instrument in His hands and serve the Lord.”

Nasa SpaceNasa,Space,
Comments and feedback can be sent to feedback@ldsliving.com