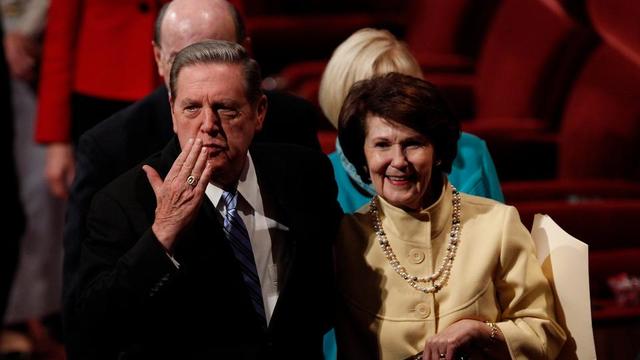 For those frustrated with the dating scene, it might be encouraging to know that many of the First Presidency and Quorum of the Twelve had to put in quite a bit of effort to win over their wives. From President Uchtdorf biking his future mother-in-law to church on Sundays to Elder Ballard diligently employing the principle of following up, many of these inspired men's love stories are hard-earned, but infinitely worth it.

Among these is the love story of Jeffrey and Patricia Holland, who now stand as an example of a truly devoted and equal partnership. But, it might be surprising for many to know that when Sister Holland first met Jeff, a college athlete lettering in four sports, she "couldn’t stand him at the time," according to an article on LDS.org. However, even then she felt something special about this boy, telling her cousin, "I had the strangest feeling, even then, that, when I was older, I would marry him."

Read the rest of their wonderful love story, excerpted from "Jeffrey R. Holland: A Style All His Own."

A promising student himself, young Jeff Holland nevertheless went through a period where athletics seemed more important than any of the other things he studied while he attended Woodward Jr. High and then Dixie High School. Lettering in basketball, baseball, football, and track, Jeff also became aware, at this time, of the new, pretty dark-eyed cheerleader named Patricia Terry.

“Jeff was always a very good athlete,” Pat Terry Holland recalls. “I especially liked to watch him play basketball. I admired his ability, and besides that, he had cute legs.”

Although Jeff remembers himself as “self-conscious” during these years, Pat had a different impression of him. She remembers their first meeting when, at sixteen, she moved with her family from a small farm in Enterprise, Utah, to St. George: “I remember writing home to my cousin about how I had just met the smartest boy in school, who was also a terrible tease, and even though I couldn’t stand him at the time, I had the strangest feeling, even then, that, when I was older, I would marry him.”

And Jeff soon began to feel the influence of this shy new girl who was to change his life forever. “No one in my family had ever gone on a mission,” Brother Holland recalls. “But when I met Pat and we became reasonably serious, I could see that she was very firm about the fact that I should go.” In addition to receiving Pat’s strong encouragements, Jeffrey Holland became conscious of a genuine growing desire of his own to fulfill a mission. And though he was barely nineteen at the time—and missionaries then were not sent until they were twenty—the policy was in transition and he was encouraged by his bishop and stake president to make a special appeal to the Brethren to see if an exception might be made. Ten days later he received his call to the British Mission.

“As an experience outside those I’ve had with my parents or my wife and children, my mission was unquestionably the single most important, most pivotal, most persuasive experience in my life. Now that’s a cliche, I know,” Brother Holland adds, “but I think perhaps a mission matters more to some than others, and for me, it meant everything. If I had been hit by a Mack truck, I don’t think it could have been any more stunning or more permanent in its effect. It either substantiated or dramatically changed—in a good way—every goal, feeling, or aspiration I had ever had.” . . .

Coming home, for Jeffrey Holland, was not without its own paradox—for returning mingled with parting: his parents had been called to serve in his same mission and arrived just as he was leaving. Furthermore, although Patricia Terry had waited faithfully for him, just as he had hoped, his arrival home came only a few weeks before she was to leave for a year to study music in the East.

“When he returned,” Pat remembers with a smile, “we knew immediately that it was all there—and in a couple of weeks we were engaged. But then it was I who was leaving. We thought that if our romance had endured two years and was still that good, then surely it would endure another year while I continued my music training.”

Their love did indeed endure and has continued to blossom into a strong, beautiful marriage. 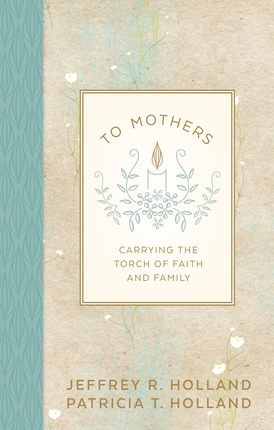 Learn more insights from Elder and Sister Holland in their incredible book, To Mothers.

"In this great, eternal work, mothers have carried the torch of faith and family from the beginning. The need for that torch to burn brightly and dispel darkness has never been greater," writes Elder Jeffrey R. Holland of the Quorum of the Twelve Apostles. In this thoughtful book for mothers, Elder and Sister Holland reflect on the crucial role of motherhood in fulfilling the purposes of eternity, as well as the challenges that all mothers experience. Filled with hope and encouragement, their message will resonate with mothers, grandmothers, aunts, sisters, and teachers. Concludes Elder Holland, "To all mothers in every circumstance, including those who struggle, I say, 'God bless you. You are doing better than you think you are.'"