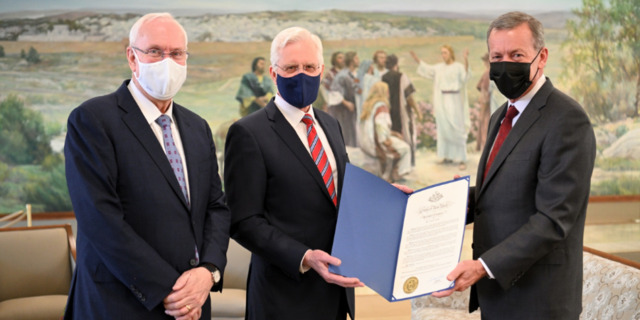 byNewsroom of The Church of Jesus Christ of Latter-day Saints | Dec. 23, 2020

More than 200 deliveries of food to local pantries across the state of New York were made by The Church of Jesus Christ of Latter-day Saints in 2020 to commemorate the 200th anniversary of the Restoration of the gospel of Jesus Christ.

During a visit to New York City in February, Elder Christofferson announced that the Church would donate food to 200 local pantries throughout the state this year. The donations would mark the bicentennial of Church founder Joseph Smith’s first encounter with Deity—known by Latter-day Saints as the First Vision—which took place near Palmyra, New York, two centuries ago.

“The Lord had prepared us, I think, for what was to come, and we were able to help,” Elder Christofferson explained.

The donations were announced just before the COVID-19 pandemic hit New York’s economy, making the deliveries even more timely.

“I think this would be very pleasing to the Prophet Joseph Smith because he was always a man of such generosity,” Elder Christofferson said.

As part of the yearlong commemoration, 35 truckloads containing 800 tons of food and commodities were shipped to New York from the Bishops’ Central Storehouse in Salt Lake City.

The food deliveries began in Rochester in upstate New York in September, followed by donations in Syracuse, Albany, Buffalo and more than 50 other New York cities.

The final deliveries were made in November to over 135 food pantries in the New York City metropolitan area, with assistance from local nonprofit food delivery services. Those partners included Food Bank For New York City, Feeding Westchester, Long Island Cares and City Harvest, each of which stored the food in its warehouses. Hundreds of Church members in New York also volunteered to help unload the food and stock shelves at local pantries to help feed the hungry.

“We’re able to help because … they’re on the scene, they’re making a difference,” Elder Christofferson said. “It gives me great hope to see that humanity … and the sincere genuine love for others that spurs them to action and to help. And if we can help those helpers, we enjoy some of the same blessings.”

Those running the food pantries, including many which are operated by faith-based organizations, expressed their appreciation for the Church’s donations.

“Words can’t express how grateful I am,” said Annette Bernard, executive director for the outreach ministry of the Christian Cultural Center which serves up to 11,000 people a month. “I’m so happy to be that vessel to be used so that that food can get out and can end food insecurity in our little area of Brooklyn.”

“We serve 50 people every two weeks, and now we have 150 or more, and sometimes we don’t even have enough food for 50 people. … We’re very glad about the donation so we can supplement what we get from the food bank,” said Rev. Alex Walbrodt of the Atonement Lutheran Church in East Elmhurst.

“We are very grateful, and I hope we keep working with the Church of Jesus Christ, just having a great support for us and the for the community,” said Jacinto Zuñiga of the Cienfuegos Foundation Food Pantry. The pantry is located at the Astoria Baptist Church in Queens, where some of the food donated by the Church was distributed in October.

“They [New Yorkers] were very affected by the COVID pandemic and continue to be,” stressed Elder Robert C. Gay of the Presidency of the Seventy. “I think that one of the things that this means for everybody in New York is that it is a wonderful thing to know that there are people out there that care.”

“We’re brothers and sisters. We’re members of the same family with the same Father in Heaven, and so that love for neighbor and willingness to give in a time where naturally you might not want to do that has been remarkable,” expressed Elder Randall K. Bennett, president of the North America Northeast Area.

In December, the Church received a citation issued by New York Governor Andrew M. Cuomo recognizing the bicentennial of the First Vision.

“Members of the Church of Jesus Christ of Latter-day Saints can be deservedly proud as they gather in joyful commemoration of two centuries of history, a bright future for this house of worship, and their ongoing commitment to giving of oneself, for the betterment of all humankind,” the citation stated.

The document also commends the Church for its “firm foundation and extraordinary longevity,” which “demonstrate a devoted unity of faith reflected in the prayers, charitable endeavors and good works of Latter-day Saint congregations.”

The Church was organized in New York in 1830. The state is currently home to more than 83,000 Latter-day Saints and two temples—the Palmyra New York Temple and the Manhattan New York Temple.

“We’re grateful for the foundations of the Church beginning in New York. There weren’t many places in the world where it could have happened, and that was one. … We look back after 200 years and express gratitude for those beginnings and for the present and for what is to come,” Elder Christofferson concluded.