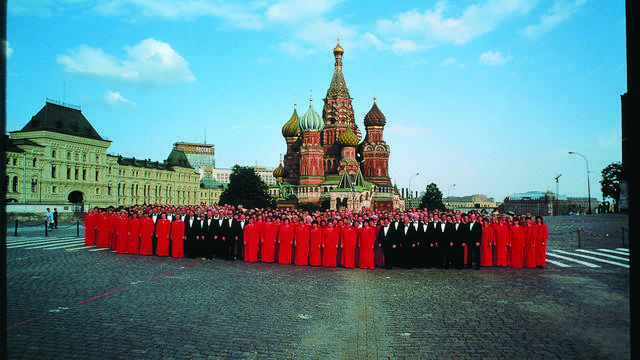 Locations have been announced for the 2016 Mormon Tabernacle Choir European tour. The choir and its companion ensemble, the Orchestra at Temple Square, will visit seven cities in Europe this summer — their first visit to Europe in 18 years.

The tour will include stops in Berlin, Nuremberg, Vienna, Zurich, Frankfurt, Brussels, and Rotterdam from June 27 through July 16, 2016, and will include over 320 voices from the world-renowned choir and members of the Orchestra at Temple Square.

Choir president Ron Jarrett said one of his primary goals when he took the helm of the choir in 2012 was to have the choir perform internationally again.

“Through social media we have been able to reach audiences far and wide. Now with this tour, we are thrilled that for the first time in nearly two decades international audiences will be able to enjoy the music of the choir in person."

Lead image from Deseret News of the Mormon Tabernacle Choir performed at the St. Basil's Cathedral in Moscow, USSR, in 1991.