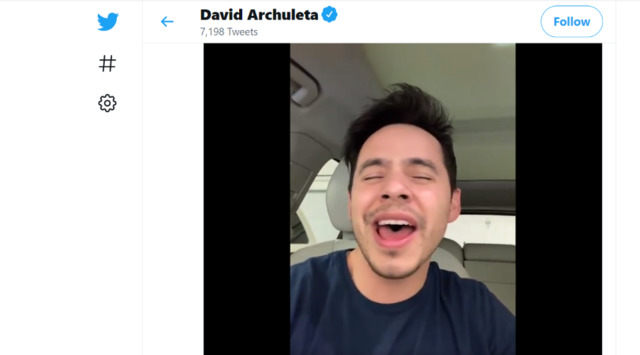 Taylor Swift just replied to David Archuleta’s Twitter video. You are going to want to see why

David Archuleta’s hit song “Crush” came out back in 2008, but yesterday it got the brilliant mash-up we didn’t know we wanted.

“When a Crush turns into a Love Story. . .” Archuleta posted on Twitter with a video of him singing the chorus of “Crush” to pop star Taylor Swift’s own 2008-hit: “Love Story.” Simply based on how well the songs complement each other, we’re surprised no one figured this out sooner.

When a Crush turns into a Love Story... 🎶 Of course with #LoveStoryTaylorsVersion. Gotta show my support :) Thanks for the inspo @Savannah_Kunze! @taylorswift13 @taylornation13 pic.twitter.com/EWijXOVahN— David Archuleta (@DavidArchie) March 4, 2021

And the craziest part of all? Less than 24 hours after Archuleta shared his post, Taylor Swift herself responded to the video. “I LOVE THIS!!!” Swift wrote, along with three smiling emojis with stars in their eyes. (See below the video.)

Before he began singing, Archuleta explained that he got the idea for the mash-up from Twitter user @Savannah_Kunze who posted a video her singing the chorus of “Love Story” to “Crush.” Archuleta shared a video of him reacting to Kunze’s video and said, “I wasn’t expecting that! You killed it!!” Watch the reaction video and hear Kunze’s song here.

Archuleta’s mash-up video has over 356,000 views so far on Twitter. The original “Crush” music video, which was released in 2009, has 120 million views on YouTube and over 116 million listens on Spotify.

Archuleta rose to popularity as an American Idol contestant in 2008. In 2012, he stunned the music world when he chose to put his professional career on hold and serve a two-year mission for The Church of Jesus Christ of Latter-day Saints. He served for two years in Chile. In addition to his pop music, Latter-day Saints will likely recognize him for his cover of the popular song, “Glorious,” featured in Meet the Mormons.