The 2 Sentences That Changed President Gordon B. Hinckley's Life Forever

While serving his mission in England, President Hinckley encountered many challenges, but two sentences kept him going and changed his life forever. Read what those sentences were in the following excerpt from Go Forward in Faith by Sheri Dew.

Elder Hinckley had been in England less than forty-eight hours when, holding an old, grained-leather satchel in one hand and a briefcase in the other, he stepped onto the flagstone platform of Preston Station in the late afternoon of June 29 and spotted a young American waiting for him. Elder Kent S. Bramwell, a bright and enthusiastic district president from Ogden, Utah, vigorously shook his hand and then led the way to their “digs” at 15 Wadham Road.

Elder Bramwell had no intention of breaking his new companion in gradually, and as they walked home he announced that they were set to hold a street meeting that night at the marketplace in the public square. The thought of preaching to uninterested passersby was daunting, and Elder Hinckley responded immediately, “You’ve got the wrong man to go with you.” But Elder Bramwell was undeterred, and a few hours later the two missionaries walked to the market and began to sing. Gradually a crowd gathered, and both missionaries taught and bore testimony. “I was terrified,” Elder Hinckley later admitted. “I stepped up onto that little stand, looked at that crowd of people, and wondered what I was doing there. They were dreadfully poor and looked to have absolutely no interest in religion.”

The worldwide depression had hit Lancashire with terrible force. Men who wore no shirts because they couldn’t afford them improvised by wearing small dickeys beneath any old jacket they could get their hands on. Their dress and grooming reflected the times in which they lived, and the crowd looked menacing that first night as Gordon peered into their faces. Though all spoke the same language, Gordon was a Westerner from the United States and the people of Preston spoke in a thick Lancashire brogue. In time, as he saw beneath the surface of poverty and came to understand the goodness of the English people, he learned to focus on their similarities rather than their differences. But his missionary initiation was intimidating.

In the providence of the Lord, Gordon had been sent to the area where Heber C. Kimball and his associates of the Twelve had baptized thousands of new members nearly a century earlier. That first night in the town square—or flag market, as the local people called it—Gordon had his introduction to a place laden with history. In Preston Elder Kimball and Brigham Young had first preached the doctrines of the restored gospel of Jesus Christ in the British Isles. Every President of the Church from Brigham Young to Heber J. Grant had labored in England.

In time, Gordon became intimately acquainted with the city that had proved so fertile a field for proselytizing in the nineteenth century. He and his companion often walked the street where Elder Kimball and his colleagues had, their first day in Preston, come upon a large flag bearing the gilded motto “Truth Will Prevail,” which they took as a sign that the Lord had them in his keeping. Elder Hinckley visited the lodging house on Saint Wilfred Street where Heber C. Kimball had had a terrifying experience with evil spirits, and passed frequently by the musty, old Vauxhall Chapel where by invitation the early missionaries had preached to a packed house the day after they arrived in Preston. The River Ribble with its tram bridge, where Elder Kimball performed the first baptisms in the area, the Cock Pit and Temperance Hall, and the obelisk in the marketplace all became familiar landmarks. Preston was rich in Church history, and Gordon reveled in the sense of time and place the area gave him.

Nonetheless, the social and religious climate Gordon Hinckley found in Preston differed significantly from that which he had known at home. Homes were smaller than in Salt Lake City, and most were warmed by little fireplaces, sometimes four or five to a house. A common joke among missionaries was that they got warm on one side, then turned and got warm on the other. Many people were on the dole, and even those who weren’t didn’t have much in the way of temporal goods. The Britishers Elder Hinckley came to know, however, were a high-principled lot, a strong-minded, plainspoken, and straightforward people who knew how to use the King’s English properly and who were, by and large, honest men and women.

Religion was a difficult subject to address, however. Many refused to back away from a fundamental question: If there were a God, why would he permit so much suffering? Despite being among the proverbial salt of the earth, the residents of Preston were largely uninterested in and even prejudiced against what they considered to be an upstart American religion. To complicate matters, not long before Elder Hinckley’s arrival two missionaries had violated mission rules and been sent home. Their indiscretions had been noised about, giving ammunition to those who claimed that Mormons could not be trusted. It had been little more than a decade since the movie Trapped by the Mormons, inspired by Winnifred Graham’s inflammatory book of the same title, had inspired widespread anti-Mormon rhetoric throughout the British Isles. Sentiment against the Church, initiated to some degree by the clergy and fostered by the English press, had infected the whole of Britain.

To make matters worse, Elder Hinckley was not well. The lush hillsides and meadows of Lancashire were a more vibrant shade of green than he had ever seen in Utah. Allergic to the grass pollen abundant in the area, Gordon was miserable from the moment he stepped off the train. “In England the grass pollinates and turns to seed in late June and early July, which is exactly when I arrived in Preston,” he later remembered. “The day I arrived there I started crying”—tears of hay fever, not homesickness, though his stamina, energy, and frame of mind were at an all-time low. Gordon’s outlook might have been brighter had his friend Homer Durham, who was also serving in the Liverpool Conference when he arrived, remained there. But on July 12, Homer was transferred to the British Mission office in London to act as president of the mission YMMIA.

After he had taken as much as he felt he could, Elder Hinckley wrote his father that he wasn’t getting anywhere with missionary work, and that he couldn’t see the point in wasting his time and his father’s money. Responding as both father and stake president, Bryant Hinckley sent a reply that was brief and to the point: “Dear Gordon, I have your recent letter. I have only one suggestion: forget yourself and go to work.”

Earlier that day he and his companion had studied the promise recorded in the Gospels: “For whosoever will save his life shall lose it; but whosoever shall lose his life for my sake and the gospel’s, the same shall save it” (Mark 8:35). That scripture, combined with his father’s counsel, seared his soul. With the letter in hand, he went into his upstairs bedroom at 15 Wadham Road and got on his knees. As he poured out his heart to the Lord, he promised that he would try to forget himself and lose himself in the Lord’s service. Many years later he indicated the significance of that series of events: “That July day in 1933 was my day of decision. A new light came into my life and a new joy into my heart. The fog of England seemed to lift, and I saw the sunlight. Everything good that has happened to me since then I can trace back to the decision I made that day in Preston.”

The experience proved pivotal, for it was the beginning of a rich and wonderful, though difficult, mission. The routine of studying the gospel and bearing testimony on a regular basis, combined with the personal sacrifice inherent in missionary service, enhanced his convictions in a remarkable way. As time passed, he came to better appreciate what the Brethren who had proselytized there a century earlier had accomplished—under much more difficult circumstances than he now faced. Their mission and sense of vision evoked within him a respect that bordered on awe. Despite their extreme poverty, they had come to England and converted a large congregation of Saints who subsequently infused the blood of Britain into the weakened body of the Church. As Gordon contemplated the faith and courage of Elder Heber C. Kimball and his Brethren, his own faith and spiritual stamina increased. 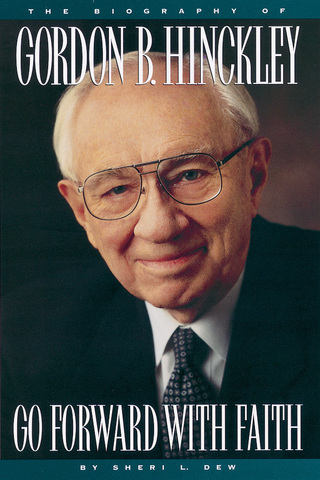