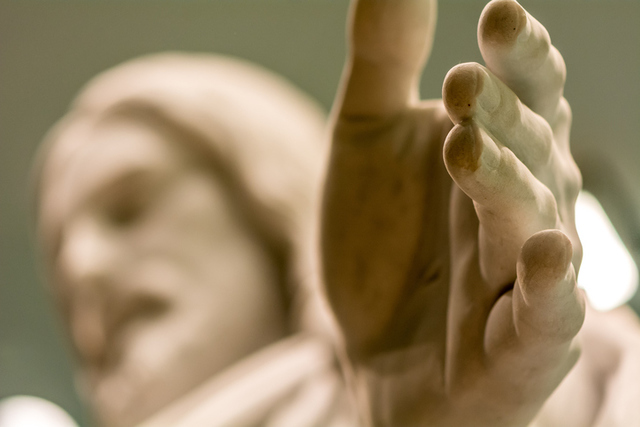 The Hebrew Translation That Deepened How I See the Atonement

My first time reading James E. Talmage's Jesus the Christ, there was one heart-wrenching truth that fixated my mind. Even as a young girl learning of Jesus Christ's crucifixion, I had a hard time believing or understanding hatred and fear that would compel people to nail anyone to a cross and watch as they slowly suffocated, let alone our Lord and Savior.

Since then, I have learned and seen more of the world, but while reading Elder Talmage's description of the laws that were broken, the rules overlooked, and the conspiring that occurred to kill Christ, I understood that His death was nothing short of carefully calculated and premeditated murder by those who should have been lights and leaders in their religious community. It staggered and disgusted me.

Aside from the life-altering truth that our Savior endured that suffering and injustice on behalf of me, my loved ones, and all who have lived, even those who conspired to kill Him in one of the most torturous ways possible, I could see little beauty in the story of Jesus Christ's death.

Recently, I discovered something that deepened my relationship with the Atonement and brought a degree of meaning to a suffering I couldn't comprehend let alone understand its purpose.

The moment before the mob cries out for Christ to be crucified, Pontius Pilate gave the people a choice: to free Jesus Christ or to free the murderer and thief Barabbas.

Previously in my mind, this moment merely illustrated the lengths others would go to kill our Savior, choosing to free a murderer rather than the man who had healed, taught, served, and walked among them.

But recently, I discovered the Hebrew translation of the name Barabbas means "son of the father." It was in that moment I realized Barabbas, like Jesus, was a son of Heavenly Father. Though a sinner, he had divinity within him.

In fact, the word "abba" or father found in Barabbas's name was the very word Christ used for Heavenly Father in the Garden of Gethsemane ("Abba, Father, all things are possible unto thee; take away this cup from me: nevertheless not what I will, but what thou wilt" Mark 14:36) when He was in the greatest pain and in His most dire hour of need.

Christ was not merely sacrificed in the place of a man, He was sacrificed for a son of His Holy Father.

That moment of Christ standing before the mob echoed a moment from our pre-existence, one in which we learned that one of us, one of the sons and daughters of Heavenly Parents, would need to die, to sacrifice himself for the rest of us. An offering needed to be made for our eternal progression. It was at that moment that Christ offered Himself, willing to die for each of us, just as He was willing to die for Barabbas.

Suddenly, I recognized the beauty of that moment Christ stood before those who mocked and hated and feared Him. In that moment, He was chosen and He chose to die for me, for all of us children of God. I am Barabbas. I am the ungrateful sinner undeserving of the gift of my Savior's life, but He gave it all the same. In the heavens, I heard Him, my Brother, offer Himself for me, for us.

And no matter how far I fall, no matter what sins I commit, nothing will change the fact that I am still a daughter of the Father, just as Barabbas was a son of God. That's why God and our Savior love us, and that's why they provided a way for us to become the people Heavenly Father dreams of us becoming.