At the May 2016 Christian Film Festival in Newport News, Virginia, a film by an LDS director and cast, The Cokeville Miracle, practically swept the festival, earning 17 awards, among them Best Feature Film, Best Director, Best Cast, Best Actor Lead, and Best Actress Lead.

In addition, the film was recognized for its uplifting message, earning the CFF Best Message Award for highlighting the reality of miracles in our lives, the CFF Good Samaritan Award for showing how people were willing to selflessly risk their lives for others, and the CFF Inspire Award for demonstrating the true power of prayer.

The Cokeville Miracle tells the incredible true story of when an elementary school in the tiny town of Cokeville, Wyoming, was held hostage by a married couple with a bomb on May 16, 1986. The miraculous events that followed transformed the lives of hundreds of people, including many who witnessed angels or received heavenly help from deceased ancestors.

►Learn more about the true story behind these events here.

Nearly three decades since these events transpired in the tiny town of Cokeville, Wyoming, movie producer T.C. Christensen, whose works include 17 Miracles and Ephraim’s Rescue, felt it was time to share those events with the world.

“I knew this was an amazing story, and one I felt like I needed to tell,” he says. “There are so many people—about 30 of them—who stand as witnesses to the spiritual blessings that happened that day.”

Although Cokeville is a predominantly LDS community, Christensen says he chose not to portray any specific religion in The Cokeville Miracle.

“People of all faiths were blessed by the event,” he explains. “It would not have been fair to portray this as an LDS-specific miracle.”

Because Christensen’s faith-promoting film is based on actual events, Christensen wanted it to be both authentic and accurate. This included filming key scenes of The Cokeville Miracle on location in Cokeville, Wyoming, which created the unique opportunity of involving the actual survivors and people in the community.

“Many of the extras in the film are children of those who were students at the time the bomb went off,” Christensen explains. “There are also a couple scenes where parents are outside the school being held back by police. Those are also Cokeville people. It’s a very emotional scene. I would have thought I would have had to have actors to portray that, but those people knew what it felt like—that trauma of family members being held captive or themselves being held captive. We just did a few takes of those scenes and we had it.”

Survivor Jennie Sorensen Johnson’s children were among the movie extras. “They wanted to do it for me,” she says. “They knew that it was extremely hard for me to be on set, but it really helped my anxiety to process the events of the day more.” 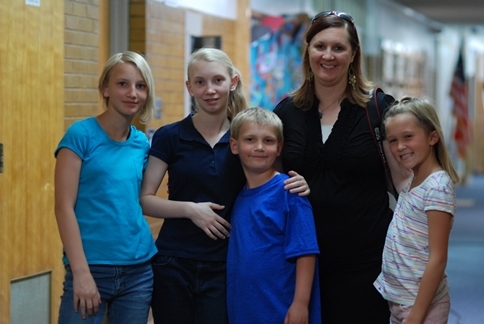 Jennie Sorensen Johnson with her children on the set of The Cokeville Miracle.

Kamron Wixom recognizes the courage of his fellow survivors for sharing their sacred experiences at the risk of ridicule and suffering emotionally by revisiting such traumatic experiences.

“The knowledge of their experiences has shaped my life personally, and now with this movie, even more lives can be blessed with the knowledge of what help there is from the other side,” he says. “We pressed forward knowing that Heavenly Father wants this story told, and that the benefits would far outweigh the hardships.”

“I hope that people come away from the film impressed by the power of prayer, that if they have not been using prayer in their lives, they would start,” says Christensen. “I hope people believe that if God intervened and helped these people, maybe He can intervene and help them with the problems in their lives, too.”

Experience the powerful true story of  The Cokeville Miracle for yourself. Pick up your copy on DVD or Blu-ray at Deseret Book stores or at deseretbook.com.