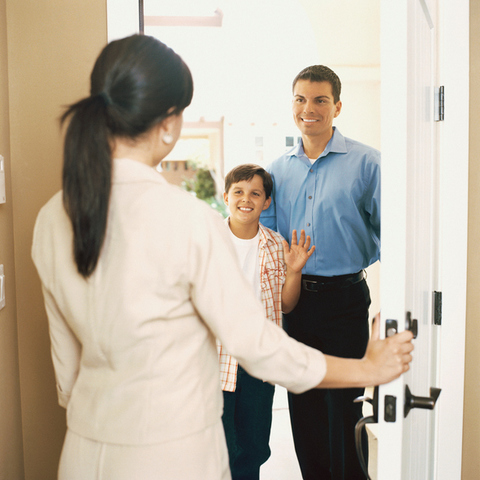 I stood on the porch and knocked at the door, my rapidly beating heart pounding against my ribs. You’d think I’d be calmer, but I wasn’t. After several weeks, this hadn’t gotten easier.

The door opened and a man smiled quizzically at me.

The man nodded, “Yeah, I recognize you; I’ve seen you walking around the neighborhood.”

“Oh, great. Well, I’d like to invite you to worship with us,” I said as I handed him a pass-along card. Earlier that day, I’d written on the backs of several of them the time and place of my ward’s sacrament meeting.

He looked it over and said, “I’m going to be honest with you, Liz. My wife and I aren’t interested in a religion or attending church. We both have Latter-day Saint family members, we’ve been to baby blessings, and one of my wife’s siblings is even on a mission. So, I know what I’m talking about when I say we really aren’t interested. I hope you’re okay with that.”

I was getting used to this; I nodded. “Sure; I appreciate you being open with me. But we can still be friends, right?”

“Of course; of course, we can,” he said with a relieved smile. “And I’ll keep waving to you when I pass your house.”

I smiled, “Okay. I’ll keep waving to you and your wife, too.”

We exchanged a few more pleasantries, and I left to knock on another door and invite yet another of my neighbors to church.

My Layton ward boundaries are probably typical for Utah, with 141 homes. Of those 141, just over 100 are listed as belonging to members of The Church of Jesus Christ of Latter-day Saints. My goal was to knock on the door of every home that didn’t belong to a member of my church. I’d never served a mission, never been to the Missionary Training Center, and never gotten past the first chapter of Preach My Gospel.

Yet there I was, having called myself on a mission to share the gospel with my neighbors. But the more I knocked on their doors, the more I recognized I hadn’t assigned myself to this task; God had.

A few weeks earlier, I’d been reading over the Primary sharing time lesson for the following month. The topic was, “I Can Choose to Be a Missionary Now,” and I needed to teach the children about sharing the gospel with others.

When I first realized what the subject was, I had my usual reaction of rolling my eyes and, at the same time, feeling guilty about my lack of missionary involvement. Several years before, I had adopted the attitude that my Utah neighbors were probably tired of being inundated by missionaries knocking on their doors. Instead of bothering them, I’d be the cool neighbor who’d respect their obvious disinterest and never bring my beliefs up.

But that day in October 2017, as I read the four short paragraphs of the Primary sharing time outline, I received one of the strongest impressions of my life: I needed to invite my neighbors to hear the gospel by attending church.

Often, when I’ve received a spiritual prompting, I’ve wondered if what I felt was truly from God or just my imagination. But that day there was no question in my mind; I knew the prompting was from God, and I knew God knew I knew. Disobeying was out of the question.

But I did put it off.

A week later, the same strong spiritual impression came again. This time, I took off to the nearest Church Distribution Center where I purchased two packages of pass-along cards. Once home, I opened one of the packages and stared at all the cards. I hadn’t realized there were blank lines on the backs; obviously they were there for something to be written on them. But what?

In that moment, I received the impression I should write the address of my ward meetinghouse and the time sacrament meeting started. I filled several cards out.

I then logged on to lds.org, looked at the map view of my ward, and identified more than 35 houses belonging to people who were not members of the Church. I would be knocking on those doors and inviting people I had never met to church. Just looking at the map made me start sweating.

I put my baby down for a nap, sent the friends home, and instructed my 12-year-old daughter to watch everyone while I stepped out.

My heart began to pound — hard. I looked at the camera app on my phone, hoping my baby was awake and I’d have to stay home. No, darn it! She was fast asleep.

I stepped out my front door, several pass-along cards in my jeans pocket and began what would become one of the best two months of my life.

But it took a while to realize those late afternoons of knocking on doors and inviting people to church, all while letting them know I was their neighbor, were good ones. I first had to hurdle many inhibitions and fears.

The Fear of Recognition

I’m embarrassed to admit this, but it was hard, really hard, to admit to people I was their neighbor. I knew it was only a matter of time when, after inviting someone to church, they’d recognize me in my front yard. My own front yard! As they’d pass my home, they’d probably look at me with new eyes, viewing me as the woman who had invited them to church. And, awkward as it is to admit it, I didn’t want that. I was more comfortable ignorantly waving at those people as they drove down my street.

As I confessed this worry to Heavenly Father, he taught me that having people view me as the woman who believed in her church enough to invite them to it was not bad at all; it was good. I’d made covenants to share this gospel and, up until 2017, I hadn’t lived up to them.

The Fear of Not Being Enough

The first two weeks of afternoons were the hardest. I constantly asked myself why I was taking so much time to experience so much discomfort. I didn’t have any training and no one official had asked me to share the gospel.

That day, as I prayed to know if I really was on the Lord’s errand, Heavenly Father filled my heart with the knowledge that He had already sent missionaries with nametags, wearing dressy clothes and fluent in Preach My Gospel, to knock on the doors of my neighborhood. What He wanted now was me: jeans-wearing, no nametag, missionary-clueless Liz. And with that assurance, I continued on.

Being rejected by your own neighbors is tough. Usually, after I invited someone to attend my ward, I asked what their religious beliefs were. That one question generated great discussions. I learned my neighbors were Catholic, Jehovah's Witnesses, agnostics, and a host of other religions, including very inactive members of my own church.

While I accepted their rejections gracefully, it was obvious many felt bad about turning me down; something I hadn’t fathomed would happen. I wasn’t just some random missionary who’d popped up on their doorstep, never to be seen again. I was their neighbor, someone they’d continue to see in the future. I soon realized that by graciously accepting their disinterest, the door of friendship was opened; one where we were all familiar and accepting of each other’s beliefs.

Fear of Not Knowing What to Say

I had been so apprehensive about knocking on doors that I never fully thought out what I’d say once they were opened. I soon learned that the promise in Doctrine and Covenants 100:6 was true, that God would tell me what I needed to say the moment it needed to be said. Countless times, words or phrases were put into my nervous, tongue-tied mouth, and once the Spirit even whispered what I needed to say while midsentence. I had to rely wholly on the Lord and, while I made many small and embarrassing mistakes, God never let me fail. I soon learned if I prayed before I left my home with faith, my experiences would end up being positive.

The first six homes I went to belonged to people who all kindly rejected me. But my seventh door was different. The woman there invited me in, told me she was interested in the Church, and asked if she could feed the missionaries. Was this the so-called golden investigator I’d heard RMs bask about in homecoming talks?

I almost didn’t know how to respond. I ended up blurting out that I would make sure the missionaries contacted her. When I left, I realized I hadn’t prepared well enough to know what to say to those who would respond positively. I now have the missionaries’ phone number programmed into my phone.

Sharing with My Family

One day, as I told my door-knocking experiences to my husband and filled him in on all the amazing neighbors I never knew we had, I noticed my 9-year-old son was intently listening. I was surprised to see sincere interest and awe in his eyes. I realized I needed to share my experiences with my children.

Our new favorite dinnertime conversations now occurred on the days I knocked on doors. My kids asked all kinds of questions; they wanted to know if people had been kind and if I’d been nervous; they wanted to hear about each interaction. I started wondering if the revelation to share the gospel with my neighbors was more for them or my children. Now, when I encourage my kids to share the gospel with others, they know I practice what I preach.

Finally, November came, and I presented my sharing time lesson in Primary. I told the children about several of my experiences and encouraged them to share the gospel with their friends. That afternoon I thought my neighborhood mission was over. A few weeks later, I realized it never would be.

In early December I found myself thinking about all the people who lived in homes that, just a short while before, I had no idea existed. That year, I gave neighbor Christmas gifts to many of my new friends. This time, as I stood at their doors, my heart didn’t pound out of nervousness; this time, it was out of love.

That experience has continued. I still make efforts to invite my friends of no faiths or other faiths to neighborhood and ward functions. They now know and recognize me. When they see me on their doorstep, we both know they’ve already rejected my gospel message and that I’m still there, truly caring about them and just wanting to be their friend.

Elizabeth Reid thinks the Great Depression is fascinating, so she earned bachelor's degrees in both economics and history. A wife and mother, she blogs at agoodreid.blogspot.com.