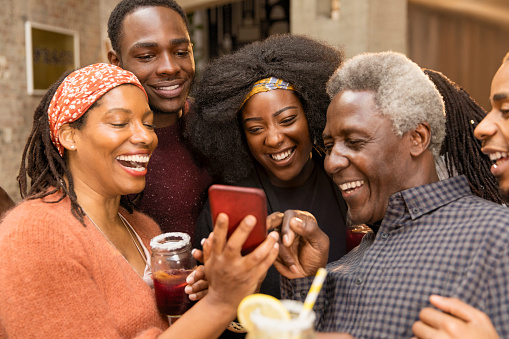 Social media. We all have our icons of choice. The red and white of Pinterest, the camera of Instagram, the blue bird of Twitter, the weird ghost of Snapchat—we all have our go-to app when we want to veg out for a while.

But why? Why do we, without even consciously thinking about it, pull up Facebook on our phones whenever we have a speck of downtime?

President Russell M. Nelson's challenge to take a 10-day social media fast has made me, and probably some of you, wonder this same thing. The truth is, there's a lot more science behind our social media use than we think.

Social media use makes us feel good, and science actually backs this up. Whenever you see a notification of a like or a positive interaction with a post you shared, your brain releases dopamine, a chemical that helps control the brain's pleasure and reward centers.

In an interview with Axios' Mike Allen, former Facebook president Sean Parker said this "dopamine hit" from social media is part of "a social validation feedback loop" that relies on the human need to be liked and loved.

This is why a 10-minute stop on Instagram or Facebook to see your likes and interact with others makes you feel good. But when we encounter stress, our body shuts down the part of our brain that regulates dopamine. This can lead to "seeking behavior" where, to maintain high levels of dopamine in the brain, people seek out activities that make them feel good.

This can lead to a sleuth of behaviors. Some can be productive (like working out) and some not so productive (hopping on social media).

This is not to say that all social media use is harmful. In fact, at the 2014 BYU campus week, Elder David A. Bednar shared how we can "use these inspired tools appropriately and more effectively to testify of God the Eternal Father, His plan of happiness for His children, and His Son, Jesus Christ, as the Savior of the world; to proclaim the reality of the Restoration of the gospel in the latter days; and to accomplish the Lord’s work" (Elder David A. Bednar, "To Sweep the Earth as with a Flood," Campus Education Week at Brigham Young University, August 19, 2014).

But, it's important to carefully monitor social media use. While most won't develop a serious addiction to social media (it's estimated that only about 5 percent of adolescents experience true symptoms of social media addiction) the effect of social media on our lives is usually more subtle than we realize.

How much social media impacts our lives depends on how we use it and there are two main umbrellas to help determine how far these effects go: social media use and social networking.

Social media use has to do with collaborating, sharing, and creating content online for the purpose of interacting with others.

Social networking is a way of being. It's not about what we do, it's about who we are. It's taking social media use to a level where it becomes a part of your life.

As the principal researcher at Microsoft Research, Danah Boyd says, “It’s no longer about on or off really. It’s about living in a world where being networked to people and information wherever and whenever you need it is just assumed (Boyd D.M., "Participating in the always-on lifestyle." The Social Media Reader. New York University Press; New York, MY, USA: 2012).

Boyd herself admits that she needs to take "digital sabbaticals" from time to time in order to not be "on" 24/7 (sound familiar?) and these sabbaticals can be very beneficial. A study from researchers at Nottingham Trent University shows that the more people use social media, the more likely they were to have FOMO or fear of missing out. This led to lower life satisfaction, lower well-being, and probably the most alarming, inappropriate and dangerous use of social networks like social media use while driving (Daria J. Kuss and Mark D. Griffins, "Social Networking Sites and Addiction: Ten Lessons Learned," www.ncbi.nlm.nih.gov).

So, what do we need to do to make sure social media use and social networking don't get out of hand? Digital sabbaticals like Boyd suggests are good. President Nelson's 10-day social media fast is definitely a good start. But once you start seeing social media creep back into your life, and as social media use becomes more pervasive, you may need some tools to help you regulate your use.

Social media founders created these apps knowing that it was possible for your brain's chemicals to help lead you along the path of social media overuse. In fact, they were counting on it. In the Axios interview, Parker admitted that the question behind Facebook was, "How do we consume as much of your time and conscious attention as possible?"

So, to help control your perfectly natural, perfectly scientific response to seek out as much social media use as possible, let's fight fire with fire. Here are three useful apps that can help you put a cap on how much time you spend "on."

This app tracks your daily usage on your iPhone or iPad and allows you to set limits on your usage. If you go over, you can set your phone to notify you or automatically shut down.

Flipd allows you to lock your phone for a period of time and there's no going back. Once you set the time you want to be locked out, not even restarting your phone will get you back on.

AppDetox helps you set parameters app-by-app for when you can be on or off social media.

"Liking" social media has a lot more to do with just filling time. There's science behind it, and spending too much time on social media can have negative consequences. That's why it's important to take President Nelson's 10-day social media fast seriously and really pay attention to how you feel as you begin using social media again.

Understanding why you want to use social media so much can help you come up with a plan to use it appropriately in your life and with good, uplifting purposes.