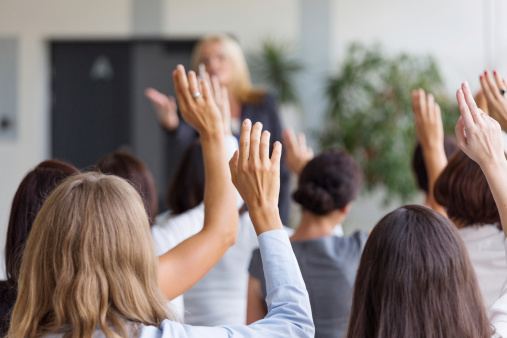 I've always loved the way sisters can learn from each other in Relief Society. I think Eliza R. Snow couldn't have said it better when she described the first Relief Society meeting: "Nearly all present arose and spoke, and the spirit of the Lord like a purifying stream, refreshed every heart" (Our Heritage: A Brief History of the Church of Jesus Christ of Latter-day Saints, chapter 5, pg. 62).

And there's one lesson I will always remember when I heard the worst and best experience shared in Relief Society that changed the way I thought about forgiveness.

It started as a usual Relief Society lesson in a YSA ward. Our teacher had just outlined our lesson about forgiveness and turned some time over for sisters to share their experiences.

A woman raised her hand and shared how a few nasty, untrue comments led to a lot of heartache for one of her relatives. These comments even led to the eventual breakup of this relative and the missionary she was waiting for and had plans to marry when he returned.

At the end of her story, this sister concluded that she would never forgive the girl who started it all and caused so much heartbreak for her relative and her family.

I sympathized with this sister. Didn't we all have someone we were struggling to forgive because they had hurt us or someone we loved that badly? In the quiet seconds that passed after that sister's story, I realized her story wasn't so different from many experiences I had, and there was a lot of room for me to grow when it came to forgiveness.

While I was thinking about this and how people often are at different stages toward forgiveness in their lives, another young woman tentatively raised her hand and was called on to share the following experience:

When she was younger, this sister started a relationship with a boy she thought seemed nice.

As time went on, this man who seemed nice at first began abusing her emotionally, mentally, physically, and sexually, making her believe all the while that his abusive actions were her fault.

As this sister struggled to get out this relationship, this man did not want to let her go. He harassed her constantly, and it got to the point where she had to start her life over to extricate herself from this nightmarish relationship that had overturned her life.

She said after all this, after suffering this abuse she had been wrongfully told was her fault, she struggled with feelings of hate and resentment for this man as well as feelings of low self-worth.

As she grappled with these destructive thoughts and feelings, she turned to her Savior for help. As she did so, she was able to find the strength through Him to forgive the man who had wronged her in nearly every way possible.

It was incredible to me sitting in my red-cushioned fold-up chair, to hear all the things she had suffered, all the wrongs she had experienced, all the pain, the hurt, the anguish, and then to learn all of that was swallowed up in the Atonement which gave her the strength to forgive.

There was a tangible sense of peace in the room after she had finished sharing her story.

I couldn't even begin to imagine the second sister's anguish as she experienced that level of abuse. In that way, it was the worst experience I had ever heard shared in Relief Society. But the beauty of turning over that experience to the Lord and finding the power to forgive when she did not have the strength to do so on her own was also one of the best experiences I had ever heard.

In his October 2013 general conference talk, Elder Timothy J. Dyches describes just how powerful and beautiful finding the strength to forgive through the Savior's Atonement can be when he tells of Corrie ten Boom, a Dutch Christian woman who was imprisoned in a Nazi concentration camp during WWII.

After the war she often spoke publicly of her experiences and of healing and forgiveness. On one occasion a former Nazi guard who had been part of Corrie’s own grievous confinement in Ravensbrück, Germany, approached her, rejoicing at her message of Christ’s forgiveness and love.

“‘How grateful I am for your message, Fraulein,’ he said. ‘To think that, as you say, He has washed my sins away!’

“His hand was thrust out to shake mine,” Corrie recalled. “And I, who had preached so often … the need to forgive, kept my hand at my side.

“Even as the angry, vengeful thoughts boiled through me, I saw the sin of them. … Lord Jesus, I prayed, forgive me and help me to forgive him.

“I tried to smile, [and] I struggled to raise my hand. I could not. I felt nothing, not the slightest spark of warmth or charity. And so again I breathed a silent prayer. Jesus, I cannot forgive him. Give me Your forgiveness.

“As I took his hand the most incredible thing happened. From my shoulder along my arm and through my hand a current seemed to pass from me to him, while into my heart sprang a love for this stranger that almost overwhelmed me.

“And so I discovered that it is not on our forgiveness any more than on our goodness that the world’s healing hinges, but on His. When He tells us to love our enemies, He gives, along with the command, the love itself" (Elder Timothy J. Dyches, "Wilt Thou Be Made Whole?", lds.org).

Though there are things in our lives that are difficult to forgive, things that are horrible and ugly that happen to us because of others, the Savior is always there to help us heal in our own time.

And even though the second sister's experience I heard that day in Relief Society was the worst I'd ever heard,  it was also the best. It taught me just how important it is to turn to the Savior and rely on His Atonement for everything I can't do on my own, including forgiveness.