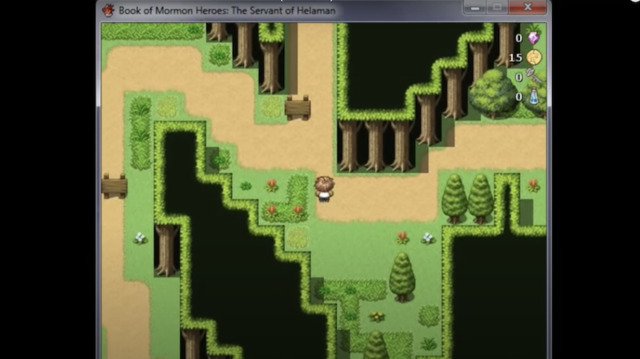 These 2 free video games centered on the Book of Mormon might be just the thing for your ‘Come, Follow Me’ studies

Six years ago, 13-year-old Levi Hilton had the perfect idea of how to spend his free time. After learning coding at school and experimenting with making apps, he thought he’d try his hand at something new—instead of simply playing video games like many teenagers would, he was going to make one.

And not just any video game. Hilton decided to model his creation after the Book of Mormon. Designed for ages 10 and up, Book of Mormon Heroes: The Servant of Helaman is centered on the story of the unnamed Nephite who kills Kishkumen in Helaman 2. Resembling the style of Pokémon and Final Fantasy video games in the 1990s, “the game allows you to experience life in the ancient Americas—from the clothing worn to the money used,” a January 2016 LDS Living article reported.

“One of the things I want this game to do is make people feel that the Book of Mormon is real,” Hilton told LDS Living when the first game was released. “I’m trying to make a game that follows the story in the scriptures. The world map is based on the description of where the cities are listed as being in the Book of Mormon. And the type of money used is the same as in the scriptures. There are also many other . . . references like these.”

But Hilton didn’t stop there. After his first video game venture, the teen went on to create a second video game, The Servant of Teancum. Covering Alma chapters 46–62, the game includes historical events in the Book of Mormon such as the title of liberty, Morianton, the death of Amalickiah, retaking cities, and more.

“I tried to be as scripturally accurate as I could be with my resources. I even laid out the cities of the Book of Mormon in the actual geological locations in reference to directions given to us in the Book of Mormon,” says Hilton.

Today, at age 19, Hilton hopes his video games will be helpful as families discuss these scriptures as part of their home study.

“We are at the point in Come, Follow Me right now where these games are particularly relevant, and I hope that these games could make the scriptures come alive and more exciting for children reading Come, Follow Me with their families,” he recently said.

► You may also like: 4 questions to answer from this week’s Come, Follow Me to be ready for war against the adversary

Seeing how the video games have brought the scriptures to life for others has been a rewarding experience for Hilton, who is currently preparing to serve a full-time mission for the Church.

“Putting myself out there like that really opened up some doors to opportunities that I wouldn’t otherwise have had,” he said. “There is a lot of enthusiasm I see toward the games as well, which is nice to see. I’ve done a lot more with entrepreneurship and computer programming since, but none of it received the same attention and excitement. I really hope that these games can make a difference for someone and can help the scriptures become more alive.”

Hilton is currently offering both video games for free. Playable on a Windows computers only, instructions on how to download Book of Mormon Heroes: The Servant of Helaman and The Servant of Teancum are available at johnhiltoniii.com.