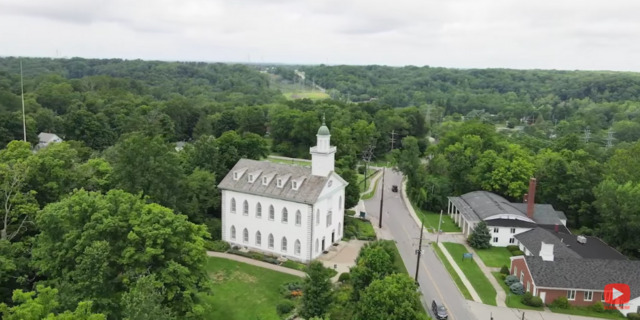 As the year comes to a close, “Don’t Miss This” and the Nashville Tribute Band are giving us plenty to look forward to as we prepare to dive into our study of Doctrine and Covenants for Come, Follow Me in 2021.

As part of their weekly YouTube videos next year, Emily Belle Freeman and David Butler will be sharing lessons filmed at Church history sites across the United States while the Nashville Tribute Band provides the music. On Tuesday, November 24, viewers got a first look at a song featured on the new Don’t Miss This in the Doctrine and Covenants soundtrack, “The Spirit of God.” The music video was filmed in Kirtland, Ohio.

Butler explains in a “behind-the music” video that the song in the video is “The best rendition of ‘The Spirit of God’ that you’ve ever heard in your whole life.”

► You may also like: A behind-the-scenes look at the creation of Emily Belle Freeman and David Butler's 'Don't Miss This'

In the “behind-the-music” video also published on November 24, Freeman, Butler, and Jason Deere of the Nashville Tribute Band introduce viewers to the Johnson family featured in the video. The Johnsons live in Kirtland, Ohio. Nate Johnson, who converted to the Church, explains why the video is so unique.

“I love all of the footage of the temple—just those little moments and those little shots of the temple,” he said. “Because that’s one thing [about] living here that we love. . . . [there are] these little moments with Kirtland that you have that aren’t part of the tour and aren’t part of what you read . . . and there are a couple of shots there that I think are really going to bring those feelings.”

The song is available on the new Don’t Miss This in the Doctrine and Covenants soundtrack. The album also features a special QR code that links to the full Don’t Miss This playlist on the streaming platform of your choice.

► You may also like: 'Don't Miss This' resources for Doctrine and Covenants now available for preorder

Emily Freeman and David Butler of “Don’t Miss This” teamed up with Jason Deere and the Nashville Tribute Band to soundtrack your study of the Doctrine and Covenants! This EP features 3 brand-new Nashville Tribute Band recordings and a special QR code that will link you to the full Don’t Miss This playlist! To access the playlist on your streaming platform of choice, simply point your phone camera at the QR code and a prompt will appear. Tap the prompt and it will take you to the playlist links. Check it out here.