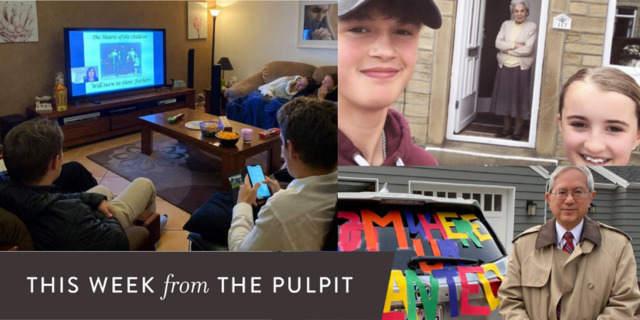 How we can stay ‘anxiously engaged’ without face-to-face interaction

Reviewing messages from Church leaders this week brought a scripture to mind:

Verily I say, men should be anxiously engaged in a good cause, and do many things of their own free will, and bring to pass much righteousness. (Doctrine and Covenants 58:27)

It doesn’t take much research into recent Church activity to see that individuals and organizations are striving to stay “anxiously engaged” with each other despite limiting circumstances. How members support each other may look different, but the love and concern we have for each other has stayed the same. For example, Elder Gerrit W. Gong shared a picture of a “drive-by greeting for returning missionaries.”

The Young Women General Presidency highlighted how the “My 150” challenge is helping young women around the world celebrate and serve together, even when they are apart. And Elder Dieter F. Uchtdorf reminded us that while we may need to mask our faces, we should not mask our hearts by creating an emotional distance from the ones we love.

May these and the other messages found below provide inspiration for the simple ways we can stay engaged in the great cause that goes on around us—a cause that will not be stopped by the changing circumstances of the world.

Sister Sharon Eubank on women and the priesthood

In continuation of the Church News series “Women of Covenant,” Sister Sharon Eubank, first counselor in the Relief Society General Presidency, shared a personal impression she had while listening to President Russell M. Nelson deliver his address, “Spiritual Treasures,” in the October 2019 general conference.

Sister Eubank explained that she had been sitting on the stand when the talk was given. President Nelson was the final speaker of the session, and during the closing prayer Sister Eubank had to wipe tears off her face because she knew the lights would soon come on and TV cameras would point to the stand.

“I was emotional because President Nelson had confirmed and expanded for me many things about women’s relationship to priesthood. I felt like a spiritual treasure had been handed to me to unwrap and study,” wrote Sister Eubank.

Sister Eubank wrote that she has spent a great deal of time since that conference learning about the priesthood and pondering how it can change her heart.

She relayed part of what she learned through a story of a woman who had spent many painstaking hours sewing an altar cloth for the new Denver temple. Then one day, the woman’s grandson went into the sewing room and used scissors to create a hole in her work. The woman was devastated and had to start over on her project.

“There is always going to be some event that comes along in our lives and snips a big hole out of our offering. It can make our hearts bleed as we feel all we have done with the best intention is wasted,” wrote Sister Eubank. “But we each have the privilege to draw upon priesthood power and skillfully begin to repair each strand or even start fresh if needed.”

To commemorate the 150th anniversary of the Young Women organization, the general presidency of the organization has invited young women to find something positive they can do with the number “150.” Examples include doing 150 acts of service, engaging in 150 days of scripture study or journaling, or participating in an activity that helps to develop a talent.

The presidency hopes that the “My 150” invitation will help young women truly celebrate this important anniversary.

“Even though this life is not an easy journey for any of us, revelation continues to unfold before our very eyes. As we reflect on the past and look forward to the future of the Young Women organization, we find, woven throughout its beautiful tapestry, the common threads of identity, purpose and belonging,” the presidency wrote for Church News.

The Huddersfield England Stake young women started an Instagram page called “My One Hundred and Fifty” to document their activities.

President Lund talks about his preparation for his new calling

In the April 2020 general conference, Steven J. Lund was called to be the Young Men General President. President Lund recently shared details about his life and his hopes for the coming years in an article for Church News.

One formative experience from President Lund’s life was receiving his patriarchal blessing at the age of 15. He said that blessing assured him “that I wasn’t just some random kid growing up on a dirt road in rural California.”

“I was just a normal kid, but as a member of the Church, I was part of something eternal that was larger than myself, and I knew that the Lord had a work for me to do.”

Evidently, part of the work the Lord has in mind for President Lund is to continue implementation of the new Children and Youth program developed by his predecessors. His wife, Sister Kalleen Lund, expressed trust in her husband’s abilities to lead the young men.

“He is the person I trust most in this world, and I know Heavenly Father trusts him,” she said. “Steve has had singular experiences working with youth his whole life. He has a unique gift to look for those who are downtrodden. . . . His love and message will resonate with those who are really struggling.”

Elder Ian S. Ardern, Pacific Area President of The Church of Jesus Christ of Latter-day Saints, and his wife, Sister Paula A. Ardern, spoke to young adults in Australia, encouraging them to participate in family history.

According to Newsroom Australia, Sister Ardern told the young adults that she regretted waiting to start doing family history until after her grandparents had died because she wasn’t able to learn firsthand about their lives. She encouraged young adults to take time to learn from their older family members.

Sister Ardern also told of a miracle she experienced in being able to locate her great-great grandfather’s grave in the midst of a cemetery with one million graves in Sydney.

“Was it coincidence? . . . No . . . The Lord wants us to find our ancestors, and He will help and guide us through the Holy Ghost," Sister Ardern told Newsroom.

Elder Ardern spoke after his wife. To help young adults sense the excitement of doing family history work, Elder Ardern recounted how, after Joseph Smith gave his first public discourse on baptism for the dead, many Church members were so excited that they rushed to be baptized for family members who had died. Elder Ardern invited the youth adults to find that same as excitement about family history and temple work.

Read a full summary of his remarks here.