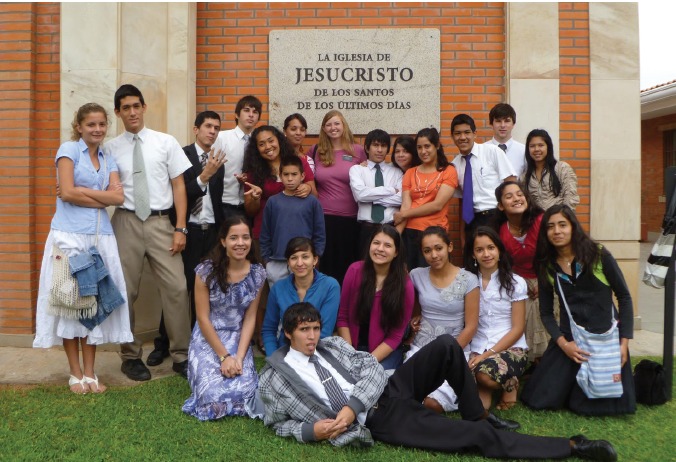 When it rains in Paraguay, it pours. Sheets of rain turn the dirt roads of small rural towns into rivers of mud, driving everyone indoors and stopping transportation.

But around nine o’clock each Sunday morning, a small band of people trudge up flooded streets towards the local LDS chapel. Men in white shirts and ties stuff the ends of their dress pants into rain boots, bracing umbrellas against the wind. Women hold up their skirts and carry shoes in their hands and small children on their hips.

Their neighbors see them pass by and think they’re crazy, and even though these Latter-day Saints arrive at the chapel drenched and shivering, they have bright smiles and warm hearts. Not even the rain can stop them from gathering together on the Sabbath.

1) The Paraguay Asunción Temple took the spot where the first meetinghouse in Paraguay was located.

Tom Hale of Gilbert, Arizona, was an early missionary who proselyted in Paraguay. With the help of a handful of converts, he and his companion turned a small house in Asunción into a chapel, put up a welcome sign, and hired a truck that usually sold traditional Paraguayan bread called chipa to announce the opening of the Moroni branch.

By Sunday, the house was filled with 40 people curious to learn more about this new church. Later that week, with the chipa truck now announcing an open house, there were lines two blocks long, waiting for a tour of the new chapel.

Hale saw astounding progress in Paraguay in the short time he was there. Today that little house has been replaced with the Paraguay Asunción Temple.

2) Some remote tribes knew Book of Mormon stories before the missionaries.

If establishing the Church in the cities seems almost easy, the challenge is preaching the gospel to those who live far away in the sparsely populated outer regions of Paraguay. Out in the grasslands and jungles, people live in scattered communities, and some tribes have their own separate languages.

However, at least one of these remote tribes has retained native oral traditions tracing back to Book of Mormon events, preparing its people for the gospel.
In 1980, an entire Nivaclé native tribe of 200 people converted to the gospel when missionaries told them the story of the Savior visiting the Americas. The leader of the tribe recognized the story as one passed down from their ancestors and knew he was hearing restored truths.
Today this tribe lives in a community of around 40 LDS families and has renamed their settlement Abundancia, Spanish for “Bountiful.”
The Church has continued to grow in all parts of Paraguay since then, and there are now over 86,700 members and 139 congregations. In 2002, the Paraguay Asunción Temple was built, and there are three missions within Paraguay’s borders.

Missionary work continues to have great success in Paraguay. The country is often called, “the heart of South America,” and that heart is one of gold.

Faith Goimarac, who recently served in the Paraguay Asunción North Mission, said, “Paraguayans love unconditionally. They are happy to give you their time, their cold water, or their chair for you to sit on. They are truly Christlike in regard to loving everyone.”

One woman described herself and other Paraguayans to be “as social as ants.” If you ever see a line of ants going back and forth from a food source, you’ll see that every time two ants pass each other, they pause for a moment to acknowledge each other. Paraguayans are very similar, making sure to stop and say adiós, literally translated as “to God,” to whoever they see. So even if missionaries in Paraguay have difficulty finding those ready to accept the restored gospel, they rarely have trouble finding friendly people to talk to and learn from.

The Church has a strong enough presence now that missionaries are quickly recognized and chapels are often frequented with visitors. And since LDS chapels are often the biggest and nicest buildings in the community, if there’s one in the area, everyone knows about it.

Because of their unified culture, materialism in Paraguay is something most people only see on television, since everyone, rich and poor, lives side-by-side in close-quarter communities. The people are diverse and colorful in personality and background, but they are as tight-knit as their traditional ornate lace, called ñandutí, which literally means “spider web.” They have a strong culture of working hard and supporting one another, both as families and as neighbors.

In the Church, social and economic differences are virtually nonexistent. If someone doesn’t have nice clothes to wear to sacrament meeting, the members are slow to judge and quick to offer what they have.

When an investigator visits the chapel for the first time, they are immediately introduced to everyone in the branch, as it’s polite to greet everyone present upon entering a room. Many members are converts themselves, so they are patient and happy to answer questions and discuss doubts.

In addition, members love to gather with their communities to play soccer and hold barbecues, with everyone sitting in a circle sharing tereré, a popular Paraguayan drink, from the same cup. LDS chapels often come with playing fields, and they are great gathering places. Members invite their nonreligious friends to play or visit with them there, making it easy to start conversations about the Church.

“[The members] consider everyone a part of their family and are always willing to talk to strangers,” says Tiffany deVries, who served a mission in Paraguay in 2011.

It isn’t always easy to be a Latter-day Saint in Paraguay. Intense subtropical weather and bad roads make it difficult to travel, and chapels are few and far between. Most come from large families, and it can be a struggle to get all the children to church or get permission from parents or spouses to attend.

Good employment is hard to find, and those who find it often face the ultimatum of working on Sundays or losing their jobs to someone who will.

Juan Angel Gomez Valesquez is a branch president in the city of Concepción and has often found it challenging to help those in the branch when he so often needs help himself. Poverty is prevalent in the country, and many families rely on Church support to get by.

On more than one occasion, Gomez has found himself giving pounds of beans to a neighbor, then spending his last coins on a couple of eggs for his seven-person family waiting back home.

“But I’ve seen the blessings from sacrificing to live the gospel,” says Gomez. “We may be hungrier than our neighbors, but the Lord always provides us with something.”