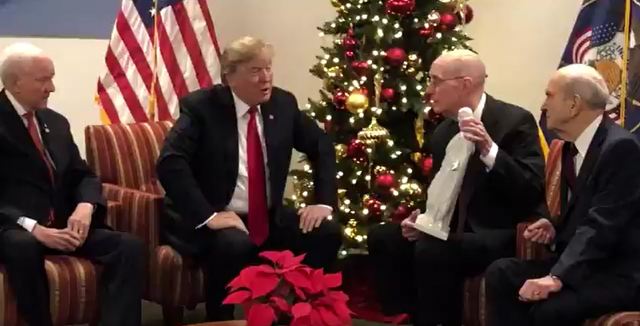 "You're helping people," President Trump praised as he toured Welfare Square on Monday.

“I know so many people that are in your Church,” Trump told LDS Church leaders. “The job you’ve done is beyond anything you could think of—180 countries, taking care of people . . . and the respect that you have all over the world.”

As part of his visit to Utah, Trump toured the Church's welfare hub, pushing a shopping cart down the aisle of the bishop's storehouse and experiencing firsthand the work the Church accomplishes with its welfare program.

His visit also included a meeting with President Henry B. Eyring, President Russell M. Nelson, Presiding Bishop Gerald Causse, General Relief Society President Jean B. Bingham, and Utah Senator Orrin Hatch. During the meeting, Trump praised President Nelson's work as a heart surgeon, saying he was a “great heart surgeon; one of the best in the world” but “he decided to help even more people" by becoming a religious leader, and President Eyring presented Trump with a Christus statue.

Afterward, President Nelson and President Eyring said they shared Church doctrine with Trump along with the topic of religious liberty, according to the Deseret News.

Hatch organized the meeting to discuss among other things, religious liberty and the mission of Welfare Square. #utpolpic.twitter.com/SA3FnXaKSS — Senator Hatch Office (@senorrinhatch) December 4, 2017

President Trump is now the 17th president to meet with Church leaders or set foot on Church properties, according to the Deseret News. He will continue to stay in Utah until late Monday afternoon.