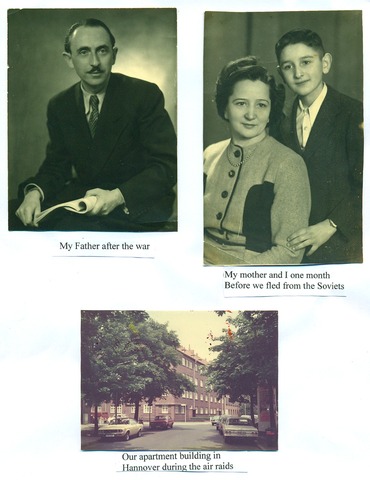 At age twelve, Walter Maschmeyer traversed Germany amid the turmoil of World War II. Traveling only  with his mother, Maschmeyer saw miles of German countryside during 1945 as they used whatever transportation was available to find a safe place in the war-torn nation. With Maschmeyer’s father on the German front and the Soviet army fast approaching, this journey was both frightening and essential. Only upon the arrival of American soldiers did the Maschmeyer family reunite and settle again into a peaceful life.

Years later, Maschmeyer would make a much longer journey to the United States, where he would find not only a place to settle but a much deeper source of peace—the restored gospel. But all of that took place long after Maschmeyer first saw war as a six-year-old boy in Germany.

Germany during the War
“We experienced almost nightly air raids in Hanover for a three-year period,” Maschmeyer recalls. “Most nights we were down in the basement shelter. We didn’t really know if we were going to get hit or not.” Several times the Maschmeyer family faced close calls when bombs fell and started fires in their building or landed but failed to explode.

Even the daily news was strictly controlled by the German government, but Maschmeyer took a big risk to hear news from a non-German perspective. “I wanted to know what was going on, especially close to the end of the war,” he says. “The German radio and newspapers would not give us trustworthy news any longer.”

Although it was illegal, Maschmeyer constructed a crude radio detector after a friend taught him how. He used this homemade radio to listen to news from the BBC, which sometimes broadcasted programs in German. “I knew it was a dangerous thing to do . . . but I was always curious,” Maschmeyer says. He also created a map on his bedroom wall to track the movement of the troops from other countries.

This secret source of news came in handy as the war drew to a close in 1945. Maschmeyer’s father had begun mandatory military service in 1944, so Maschmeyer and his mother lived largely on their own. Because of his radio and map, Maschmeyer knew how quickly the Russian troops were approaching Germany. “At least we could make some preparations in case we had to evacuate very quickly,” Maschmeyer recalls.

Refugees on Many Trains
The evacuation order came on January 18, 1945. Twelve-year-old Maschmeyer and his mother evacuated by themselves from Beuthen, where the family had moved in 1942. “We were on a dilapidated train consisting mostly of box cars and a few passenger cars with blown-out windows,” Maschmeyer describes. They took the last train out of the city.

Wind and snow blew in through the broken train windows, and the heaters on the trains did not work. Maschmeyer and his mother used sleeping bags to keep warm, but most on the train were not so lucky. And traveling by train was anything but rapid. “The train would travel a few miles and then suddenly we’d stop for a day or even a day and a half,” Maschmeyer recalls. “We were concerned with the Russians catching up with us. This could have happened at any moment, so we were very uneasy.” Often the tracks were being rebuilt in front of them, a major reason for the delays. On this stop-and-go journey, soup was provided at makeshift kitchens along the tracks, but this was usually their only source of food.

When they stopped in the village of Burg, government officials assigned Maschmeyer and his mother to live on a local farm. After walking about a mile and a half, they knocked on the door and were greeted by the farmer’s wife. She assigned them to live in an upstairs bedroom with little heat, the best the couple could provide because they were already housing other outcasts.

Life on the farm was primitive compared to the Maschmeyers’ city living conditions. “We were no longer regular people,” the young Maschmeyer realized. “We were now called refugees.” For instance, indoor plumbing was not an accommodation for war evacuees. Instead, everyone living on the farm used an outhouse with a heart-shaped hole in the door that allowed snow to blow in and settle on the seat. “We got used to it,” Maschmeyer says. “You went into the outhouse and out again as quickly as you could. Comfort—of course that was nonexistent.”

One thing the Maschmeyers did have on the farm was food. The farmer had plentiful supplies and generously shared them. Even as refugees, Maschmeyer and his mother got to know their host and hostess, sometimes playing canasta in the evenings. The farmer and his wife even gave Maschmeyer a gift for his birthday, a mug that Maschmeyer kept for many years.

One day while walking into town, Maschmeyer and his mother encountered a group of Russian troops—the army they had been fleeing. Frightened, they hid in the doorway of a shop as the soldiers passed on horseback. Later, they discovered that these troops were fighting on the German side. Nevertheless, the arrival of these troops signaled the end of the Maschmeyers’ time at the farm.

Amid the ever-present trials, miracles also occurred in the lives of the Maschmeyers. All refugees were to board a train bound for Dresden, but as Maschmeyer and his mother were about to board, they heard a familiar voice—their former neighbor. She told them to board her train, headed in a different direction. That night, February 13, 1945, Dresden was heavily bombed from the air. Always grateful, Maschmeyer says, “I am in awe about how the Holy Ghost saved my life on so many occasions.”

Having avoided disaster, Maschmeyer’s refugee journey soon ended in the city of Clausthal. He and his mother lived there for several months until they returned to Hanover at the end of the war. While in Hanover, Maschmeyer’s father returned and the family was complete again. “We had lost everything we owned, but we had the great opportunity to make a new start,” Maschmeyer says.

Coming to America
In 1954, Maschmeyer and his family received a visit from some family members who lived in America. These relatives told him about an opportunity to work in a travel agency in New York City owned by another family member. Several months later, Maschmeyer's found himself at the Frankfurt airport, saying goodbye to his parents. The flight to America took 19 hours, and Maschmeyer’s plane made several stops before landing in New York City. Despite the travel time, Maschmeyer says, “I was thrilled the whole time.”

Maschmeyer immediately began noticing the differences between his new American lifestyle and the German one he left behind. Eating extra-large hamburgers, riding in brand-new automobiles, and even owning a television were all new to him. “It amazed me so much how easy and comfortable life really was,” says Maschmeyer. “I saw a future here.”

Maschmeyer’s future changed forever in America when he found the restored gospel. He met a Latter-day Saint woman named Nelda while living in New Orleans. They began dating, but she insisted she would marry only someone of her faith. So he began attending church with Nelda and meeting with the missionaries. “Then much to my surprise,” Maschmeyer says, “Nelda gave up her job and left New Orleans. She said she didn’t want to influence me either way.”

Nine months later, Maschmeyer called Nelda, who was living with a sister in Albuquerque, New Mexico, with a big announcement—and a big question. “When I told her I’d been baptized, she said, ‘That’s wonderful.’” But Maschmeyer didn’t stop there. He immediately asked when they could get married. Two weeks later Maschmeyer and Nelda were husband and wife. They would eventually welcome a daughter, also named Nelda.

Although Maschmeyer became a United States citizen in 1962, he’s never forgotten his German heritage. He’s journeyed back to Germany many times and told his family about his days growing up there during World War II. He’s glad that Germany recovered from the war and became a strong nation again, but he praises the United States just as highly. “I’m so grateful that I came here. This is the only free country in the world. What country are people going to go to for freedom?”

To learn more about Walter Maschmeyer’s life or to share similar experiences with him, e-mail waltermaschmeyer[at]gmail[dot]com.