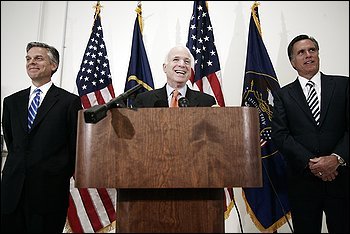 "My grandfather, David Haight, my mother's father, he was an apostle and he grew up in Oakley, Idaho. And, if I have this right, his best friend growing up was George Romney," said Peter, the 47-year-old chief executive of his family's multibillion-dollar chemical company. "So that's where the Romney-Huntsman line started."

It is likely to end on much less friendly terms.

A showdown between Huntsman, 50, and Romney, 63, would likely be the most bitter of the coming election. The respective former governors of Utah and Massachusetts have vast fortunes, silver tongues and great hair. They are also distant cousins, descended from a Mormon apostle who played a key role in the faith's founding. The two men enjoyed the early support of powerful and devout fathers and performed the church's missionary work - Romney in France during the Vietnam War and Huntsman in Taiwan. For years, the clans remained close, until the two scions sought to lead the 2002 Winter Olympics in Salt Lake City, a coveted post that promised to boost political prospects. The Games went to Romney, and the family bonds froze over when Huntsman endorsed Sen. John McCain (R-Ariz.) over Romney in the 2008 presidential contest.
Read the rest of this story at washingtonpost.com