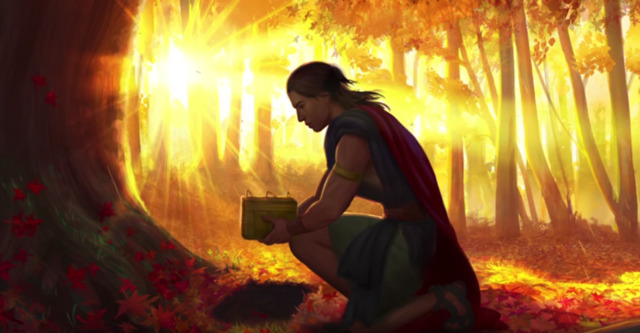 In addition to those resources, a recent video by Book of Mormon Central describes how the Book of Mormon was compiled and came to be the book of scripture as we know it today.

The video, illustrated by digital painter Katie Payne, depicts scenes of lush green jungles and the resurrected Savior returning to the Americas. It also shows the ancient American prophet Mormon as he passes a historical record of gold plates compiled by him to his son Moroni, who completed the record and buried it in a hill. Thousands of years later, the location of those plates was then revealed to Joseph Smith, who translated the record and had it published.

Narration in the video is taken entirely from text in the Book of Mormon and highlights the title page of the Book of Mormon, which is discussed in the Church’s Come, Follow Me lesson for the week of December 30th to January 5th. The title page, which was also translated by Joseph Smith, lists the purposes of the record.

According to the title page, the purposes of the Book of Mormon include showing “unto the remnant of the house of Israel what great things the Lord hath done for their fathers; and that they may know the covenants of the Lord, that they are not cast off forever, And also to the convincing of the Jew and Gentile that Jesus is the Christ.”

The Come, Follow Me lesson for this week also encourages those studying the Book of Mormon this year to look for passages in the scripture that accomplish the purposes identified in its title page.

Learn more about the title page of the book of Mormon in this week's Come, Follow Me lesson.

Watch Book of Mormon videos by The Church of Jesus Christ of Latter-day Saints.