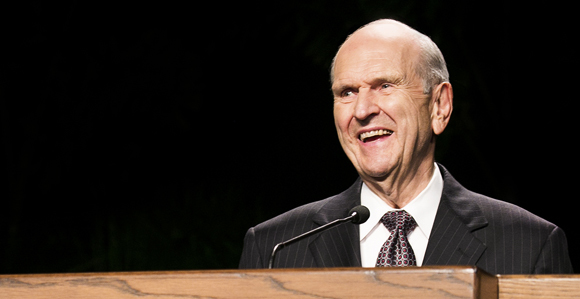 What ABC News, "Newsweek," and "The New York Times" Are Saying About Our Next Potential Prophet

With the recent passing of beloved prophet Thomas S. Monson, many are wondering what is next for the leadership of the Church.

As the senior apostle and president of the Quorum of the Twelve Apostles, President Russell M. Nelson will most likely be selected as the next prophet.

► You'll also like: "How Succession to the LDS Presidency of the Church Works"

ABC News notes President Nelson is "the second-oldest person to be named president of The Church of Jesus Christ of Latter-day Saints" and that only "Joseph Fielding Smith was older, by one month, when he became church president in 1970."

A recent Newsweek article notes President Nelson's history as a "world-renowned cardiothoracic surgeon" and his military history as an army medic in the Korean War.

The article also nodded to President Nelson's intellect and dedication as a Church leader, noting he has written chapters in textbooks medical textbooks, received honorary degrees, learned to speak Mandarin, and has traveled to 31 countries in five years to help build the gospel around the world.

In addition, Newsweek highlighted President Nelson's family: "Born September 9, 1924, Nelson and his late wife, Dantzel White, had 10 children, including nine daughters and one son, as well as 57 grandchildren and more than 100 great-grandchildren."

A recent article from The New York Times about the succession of leaders within the Church mentioned President Nelson and his ability as a religious leader.

"Mormons don’t do succession drama," the article states. "When the head of their church dies, as Thomas S. Monson did on Tuesday, the next leader is chosen from the top ranks based strictly on seniority."

Though President Nelson is older than President Monson and would be the second oldest prophet to be appointed in history, the article quoted Church spokesman Eric Hawkins about President Nelson's physical ability to lead the Church.

“President Nelson is remarkably healthy,” Eric Hawkins, a spokesman for the church, said. “As recently as last season, he was still snow skiing.”