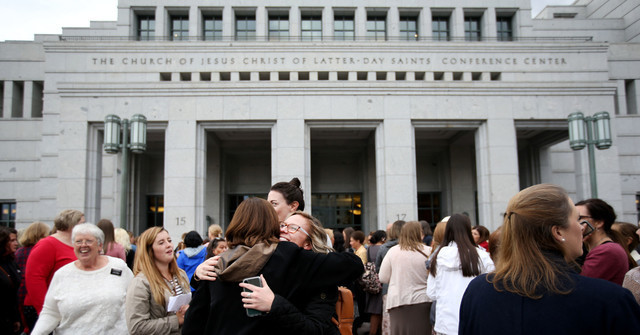 What Church Leaders Have Recently Said About Women and the Priesthood

Recently the Ensign shared a beautiful article by Barbara Morgan Gardiner about connecting daughters of God to His priesthood power. This article has been shared by several apostles on Facebook, along with messages about the power of women and how they access priesthood power in their lives.

"I have spoken before about how we are not accustomed to speaking of women having the authority of the priesthood in their Church callings, but what other authority can it be?

"When a woman—young or old—is set apart to preach the gospel as a full-time missionary, she is given priesthood authority to perform a priesthood function.

"The same is true when a woman is set apart to function as an officer or teacher in a Church organization under the direction of one who holds the keys of the priesthood."

President Oaks expanded on this teaching in his April 2014 conference talk, "The Keys and the Authority of the Priesthood":

"How does [understanding the priesthood] apply to women? In an address to the Relief Society, President Joseph Fielding Smith, then President of the Quorum of the Twelve Apostles, said this: 'While the sisters have not been given the Priesthood, it has not been conferred upon them, that does not mean that the Lord has not given unto them authority. … A person may have authority given to him, or a sister to her, to do certain things in the Church that are binding and absolutely necessary for our salvation, such as the work that our sisters do in the House of the Lord. They have authority given unto them to do some great and wonderful things, sacred unto the Lord, and binding just as thoroughly as are the blessings that are given by the men who hold the Priesthood.'

"In that notable address, President Smith said again and again that women have been given authority. To the women he said, 'You can speak with authority, because the Lord has placed authority upon you.' He also said that the Relief Society '[has] been given power and authority to do a great many things. The work which they do is done by divine authority.' And, of course, the Church work done by women or men, whether in the temple or in the wards or branches, is done under the direction of those who hold priesthood keys."

1. Women Have Priesthood Authority in Callings

"First, through a setting apart by an authorized priesthood holder, women have priesthood authority to use in their callings in their wards and branches throughout the Church. . . .

2. Women Have Priesthood Power Through Covenants

3. Women Receive the Blessings of Heaven

"Third, faithful women invite the blessings of heaven independent of priesthood ordination. The blessings of God’s total priesthood power and authority are available to LDS women throughout the world. . . . Their faith gives them access to the powers of heaven to resist temptations, act in charity and goodness, build families, improve communities, and establish the Church. . . .

"Fourth, a woman participates in the fullness of the Melchizedek Priesthood through temple sealing to a worthy Melchizedek Priesthood holder. Exaltation and eternal life in the highest degree of the celestial kingdom are achieved only as the fulness of the priesthood is attained through building and achieving an eternal marriage. The highest intellectual and spiritual development of both men and women is to become as God is. Becoming as God cannot be achieved by men alone or women alone. . . .

"Even with this understanding, some may still find the issue of women and priesthood ordination troubling. But the time will come when those who remain faithful to the restored gospel of Jesus Christ despite their concerns will be blessed beyond measure."

Attesting to the power and influence of women in the Church, President M. Russell Ballard posted on Facebook:

"A woman’s sphere of influence is a unique sphere—one that cannot be duplicated by men. No one can defend our Savior with any more persuasion or power than can you—the daughters of God who have such inner strength and conviction.

"The power of the voice of a converted woman is immeasurable, and the Church needs your voices now more than ever.

"I have spoken before about how any priesthood leader who does not involve his sister leaders with full respect and inclusion is not honoring and magnifying the keys he has been given. His power and influence will be diminished until he learns the ways of the Lord."

While we might not understand everything about the priesthood and how it functions in our Church, it is comforting to know our Church leaders are mindful of each one of us and attest that all of us can access the full blessings and powers of heaven.