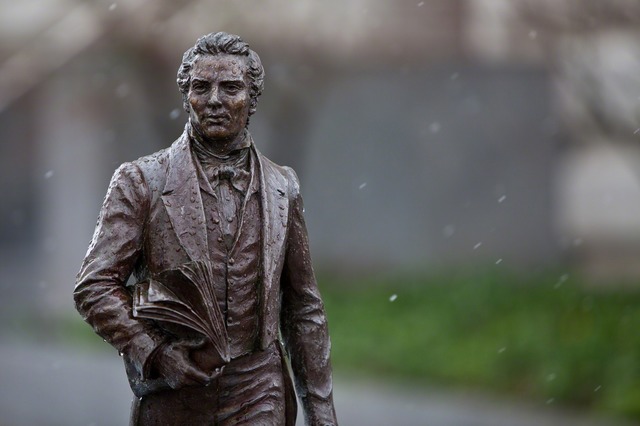 Not very many people know that Joseph Smith owned a faithful mastiff, Major. Read how the prophet's furry companion protected and loved him throughout his life, even in the dark confines of Liberty Jail.

Among the companions of the Prophet Joseph Smith was a faithful and protective dog. At a session of the Mormon History Association Conference June 2, scholar Alexander L. Baugh presented sources that tell more about the dog, including documents recently discovered in Iowa.

“The very first reference we have to Joseph Smith’s dog is from George A. Smith on Zion’s Camp,” Baugh said, referring to the expedition led by the Prophet from Kirtland, Ohio, to Clay County, Missouri, to regain land from which the Saints had been driven.

According to George A. Smith’s reminiscence, an 80-year-old member of the camp known as Father Baker gave the dog to the Prophet for protection, fearing that spies who were watching the camp would seek Joseph’s life.

“The dog was greatly attached to Joseph and was generally by his side, keeping watch over everything that approached the camp,” George A. Smith wrote.

► You'll also like: Animals and the Afterlife: Do All Dogs Go to Heaven?

The reminiscence describes an altercation between Joseph and a dissenter in the camp named Sylvester Smith, who was angered when the dog threatened to attack him with the intent of protecting Joseph.

Baugh, a professor and chair of the Department of Church History and Doctrine at BYU, cited another reference to the dog, this one from a reminiscence by Joseph Smith III, son of the prophet. He remembered at the age of 6 some excitement going on outside the house.

“I remember Father starting away from the house and our white dog Major jumping from an upper window in a platform below to follow him off,” Joseph III wrote.

Lead image from the lds.org