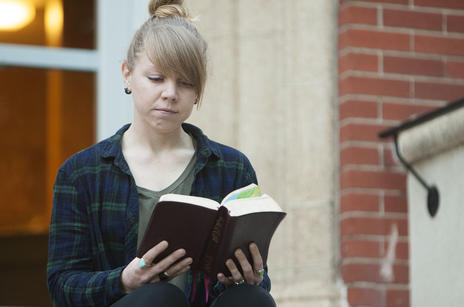 What Keeps Us from Talking About Our Faith in Public?

When people stop talking about their faith in public, they miss out on helping people in need and correcting unfair stereotypes. So why are we so afraid?

Kimmy Ertel-Waterman was shy growing up, but she embraced life as a Mormon missionary in Romania, seeking out opportunities to share her faith with strangers in a foreign language. She says she gained confidence during her 18 months of service.

However, when she got back to the U.S. in 2009, she felt lost. She welcomed chances to talk with family about her mission for The Church of Jesus Christ of Latter-day Saints. She even found openings to bring it up in classes at the University of Oregon. But when talking about religious beliefs was no longer an everyday routine, she was more cautious in how and when she broached the topic.

"The stress of the transition hindered me from reaching out to as many people as I could to talk about faith," said the 29-year-old environmental activist.

Fear of how other people will respond to religious discussion guides — or, rather, halts — many believers' attempts to bring up their faith with family, friends or strangers. When they sense someone disagrees with them about religion, nearly 1 in 4 U.S. Christians (24 percent) avoid the subject altogether, according to a new survey from Pew Research Center.