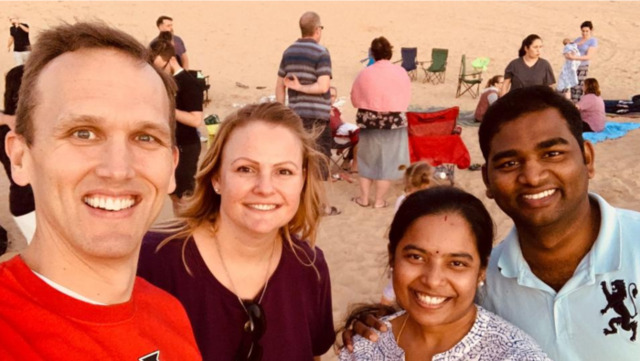 Currently, the 8,000 Latter-day Saints living in the United Arab Emirates (UAE) and the surrounding regions have to travel to Ukraine, Italy, or Germany to attend the temple. But those long travel days will soon end as President Nelson has announced plans to construct a temple in Dubai, United Arab Emirates.

As it was nearly 2 a.m. in the UAE when President Nelson stood at the pulpit in Salt Lake City, Utah announcing the new temple, members woke up the next morning to the thrill of receiving the message of a temple.

Giuliana Giusti Machado, a Brazilian resident of Sharjah, UAE, says, “I woke up early, opened my phone and saw the message about a temple in Dubai. I couldn’t believe my eyes!”

“I have dreamed of this day all my life for a temple in the Middle East,” said Sewar Tashman of Jordan. “I woke up this morning with a dream coming true!”

President Nelson noted in his announcement that the Dubai temple “comes as a response to their gracious invitation.” Latter-day Saints in the UAE are expressing their gratitude for their nation’s welcoming support of the construction of a temple.

Andy Mojica, a Latter-day Saint in Dubai, says, “I’m so grateful for our Emirati leaders to have allowed such a landmark in their country and show that tolerance will shine even more in this century!”

Linton Crockford-Moore, a Dubai resident from England, says, “Living in Dubai for 21 years, I have marveled at the compassion, hospitality, tolerance and generosity of the people of this country.”

Lead image of Russ and Robynne van der Werf, and Ramesh and Aparna Boddeti join members of The Church of Jesus Christ of Latter-day Saints as they gather for an activity in the desert near Dubai, United Arab Emirates. Photo Credit: Robynne van der Werf