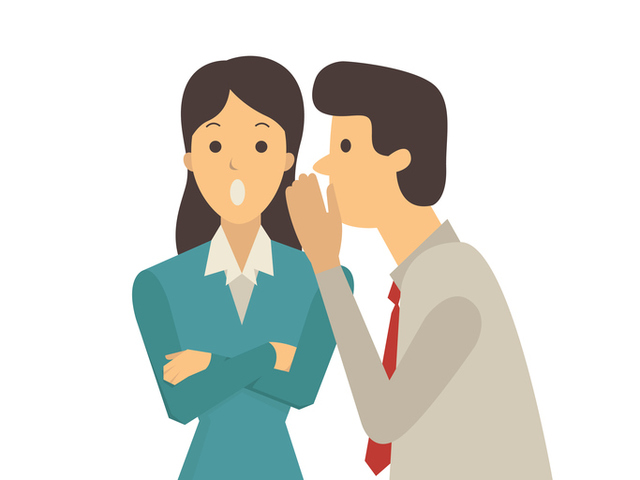 What My Mom Taught Me About Gossip Without Saying a Word

During my Young Women years, I heard many lessons on the hurtful effects of gossip. In my 14-year-old brain, I assumed we were taught those lessons because gossip was a problem only teenage girls struggled with—until one day when my bubble of naivety was suddenly burst.

One hot June afternoon, I was hanging out with a friend from my ward. After watching Back to the Future on VHS, we emerged from her basement and began making ourselves a snack. Through the kitchen window, we heard the laughter and chatter of several moms in the neighborhood. They talked about their families, vacation plans, and the latest hairstyles. That's when their conversation took a turn that truly shocked me.

The ladies began critiquing the hairstyles of various women in the neighborhood—everything from cut to color, bangs to banana clips (it was the '80s after all). They soon honed in on one particularly "unstylish" woman.

"I heard her husband is cheating on her and spends all their money on his girlfriend," one said.

"I think they're getting divorced," another added. "She probably doesn't have a dime to her name. Still, she should try look better if she ever wants to get married again."

The women continued to casually move from topic to topic, including which child should have won the school's end-of-year writing contest instead of the actual winner, whose story really wasn't that good. (I was the winner, FYI.)

My feelings were hurt by what they had said about me, but I was even more troubled by the fact that these women were in my ward. They were Primary teachers, Sunday School teachers, and, yes, Young Women advisors. As naive as it sounds, I didn't know that adult women gossipped—and the reason I didn't know is because I had never heard my mom spread rumors or say one negative thing about anyone. Ever.

From a social standpoint, I understand how gossipping can be a bonding experience for people—sharing juicy information or being trusted with such information can make you feel powerful, in-the-know, and part of the cool crowd. And I often wonder if my mother sacrificed her neighborhood popularity to a degree because she didn't participate in such conversations.

As I've gotten older, I've also come to understand the kind of sensitive information Church leadership (or even a home teacher or visiting teacher, for that matter) is privy too. I now realize that as my mom served as Relief Society president and in other callings, she probably knew a lot more about the ward members than most people did—a lot that would have been easy to gossip about, had she wanted to. 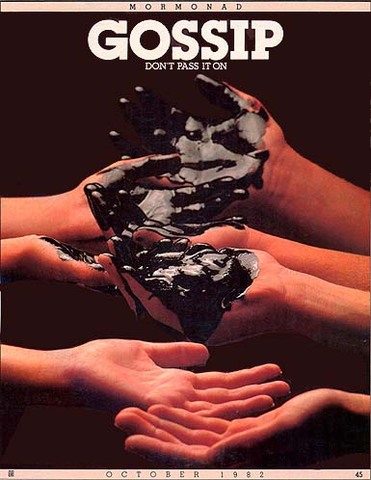 I have learned for myself, as my mom understands so well, that there is peace that comes from staying out of the drama. After all, we feel guilty when we carelessly say things we know we shouldn't, and the person being talked about feels hurt and betrayed when he or she discovers what was said (which, let's face it, is almost always). For our own well-being, as well as for the well-being of others, the Lord has made it clear that we shouldn't participate in gossip. Take Psalms 15:1-3, for example:

1  Lord, who shall abide in thy tabernacle? who shall dwell in thy holy hill?

2  He that walketh uprightly, and worketh righteousness, and speaketh the truth in his heart.

3  He that backbiteth not with his tongue, nor doeth evil to his neighbour, nor taketh up a reproach against his neighbour.

Similarly, in Psalm 34:13, we are counseled to "keep thy tongue from evil, and thy lips from speaking guile." In Doctrine and Covenants 42:27, the Savior commanded, "Thou shalt not speak evil of thy neighbor, nor do him any harm." And then there's my personal favorite: "Whoso keepeth his mouth and his tongue keepeth his soul from troubles" (Proverbs 21:23).

Over the years, I have come to recognize what a rare gift my mom has for keeping confidences and choosing her words carefully, and I have been tremendously blessed for following her example. As brothers and sisters in the gospel, we should be the ones to build up one another instead of tear down, to keep confidences instead of spreading rumors or sensitive information—even if it's true. After all, as the old addage goes, "Never throw dirt. You only lose ground."