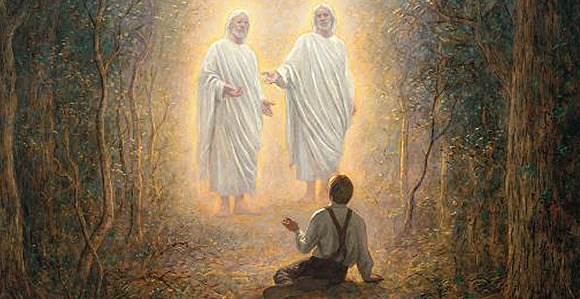 What You Can Learn From the Church's New First Vision Podcast

This combined account and other historic details of the First Vision are included in a new podcast released Friday by The Joseph Smith Papers.

“Now, I’m not talking about historical trivia consisting of a long list of dates or an assortment of ‘fun facts,’” host Spencer McBride says in the podcast’s prologue. “I’m talking about historians who have spent years immersed in Joseph Smith’s surviving documents—scholars, men and women who have walked the fields of history who can tell you what occurred thereon and why those events occurred the way that they did.”

The podcast is divided into six episodes. Throughout the episodes, historians and scholars share information about the circumstances surrounding the First Vision.

The first episode, “An Unusual Excitement” explores the social, economic, and cultural changes occurring the 1800s that led the Smith family to Palmyra, New York.

In the second episode, “What Was to Be Done,” historians look at the questions that weighed heavily on Joseph Smith’s mind and how his questions were more than just, “Which of all the churches were true?”

“And he did ask that question,” McBride says in the episode. “But there was an important question that preceded it. Joseph wanted to know about salvation. He wondered about the state of his soul, about his standing before God. He wanted to be forgiven for his sins. He wanted to know the path to eternal salvation.”

Episode 3: “I Retired to the Woods”

In episode three, “I Retired to the Woods,” McBride is joined by Mark Staker, a curator with the Historic Sites Division of the Church History Department. Staker helps describe the scene of the First Vision—the sights, the smells, and the sounds—and explains how the Sacred Grove likely wasn’t as green as artistic renderings make it out to be.

“In early spring, what you’re going to have are blossoms,” Staker says in the episode. “These trees are going to be full of blossoms…So, when Joseph goes out to pray, and you think a bit of brown, sure, but mostly color everywhere he’s looking. Lots of bright colors of all these blossoms from these trees.”

Episode 4: “A Pillar of Light”

Those who have seen the film, "Ask of God: Joseph Smith's First Vision," at the Church History Museum will recognize the sound clips in episode four, “A Pillar of Light.” The film combines all of the nine surviving accounts of the First Vision.

“The result is a fluid telling of the First Vision using contemporary accounts of the event,” McBride explains in the episode. “You will hear a story in a way that is at once familiar and new.”

Episode 5: “It Caused Me Serious Reflection”

Episode five, “It Caused Me Serious Reflection,” shares how Joseph Smith described the First Vision to those close to him and to the public. It explains the background behind each of the nine accounts of the First Vision and adds insights as to why certain details may have been included or excluded.

“Four firsthand accounts and five secondhand contemporary accounts of the First Vision—of Joseph Smith’s theophany, a word meaning a visible manifestation of God to humankind. Those are the principles sources historians use when studying the First Vision,” McBride says in the episode. “And they illuminate one another. When studied together, they allow for deeper insights into Joseph’s history and the history of the church.”

The final episode of the podcast, “I Had Seen a Vision,” describes the impact and continuing influence of Joseph Smith’s First Vision.

“The real resonance of the First Vision today is to know that it’s the nature of God to give to those who lack wisdom, to answer those who are in distress, to come to the aid of His children who are desperately needing reassurance of His love, and that they’re not cast off because of their sinfulness,” historian Steven Harper says in the episode. “God is responsive. God isn’t cold, heartless. The God that reveals Himself to Joseph Smith in the Sacred Grove is a God who answers teenagers in times of trouble. That, to me, is everything”.